The remains of the body of a BL-755 aircraft bomb in Hajjah in northern Yemen. Manufactured by a British company, Hunting Engineering Ltd, from the 1970s. It has malfunctioned as there are bomblets still present. 5 of the original 7 sections are visible. Each contains 21 bomblets which are ejected by rapidly inflating a bladder. There would have been 147 anti-armour bomblets, the shaped charge of which is capable of penetrating 250mm of armour. At the same time the casing breaks into more than 2000 fragments which act as an anti-personnel weapon. The cluster bomb was most likely dropped by Saudi Arabia-led coalition forces. Out of the coalition members, UAE and Saudi Arabia are known to possess this type of cluster bombs in their stockpiles. Picture taken by the farmer whose land was affected by this cluster bomb. 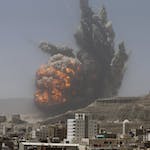