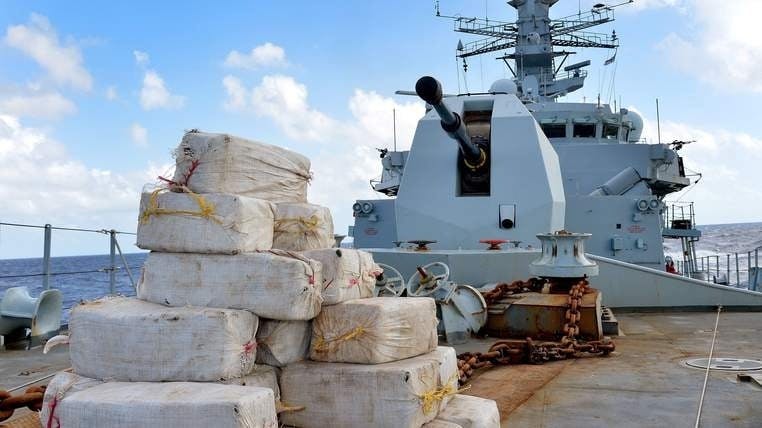 Undated handout photo issued by the Ministry of Defence of Plymouth-based Type 23 frigate HMS Argyll with bales of seized cocaine, a third haul of the drug in the Caribbean in as many months with a street value of £36 million. PRESS ASSOCIATION Photo. Issue date: Sunday November 23, 2014. The HMS Argyll has now seized 1,600kg of the drug with a combined wholesale value of over £68 million. The Plymouth-based Type 23 frigate’s latest coup came after a midnight high speed chase at maximum speed. After receiving the tip off from a US customs aircraft, the HMS Argyll quickly closed a 70-mile gap to intercept the suspect vessel. The smugglers began to throw their illegal cargo overboard but were surrounded by small patrol boats guided from the warship with high tech radar technology. See PA story DEFENCE Drugs. Photo credit should read: LA(Phot) Stephen Johncock/MoD/Crown Copyright/PA Wire

NOTE TO EDITORS: This handout photo may only be used in for editorial reporting purposes for the contemporaneous illustration of events, things or the people in the image or facts mentioned in the caption. Reuse of the picture may require further permission from the copyright holder.