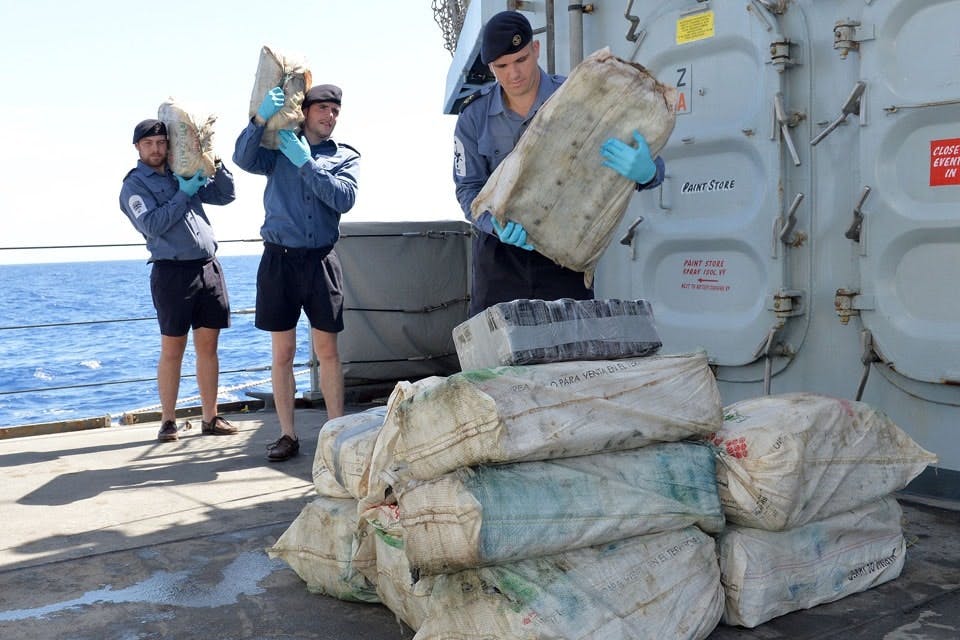 A Royal Navy warship has seized nearly 600 kilos of cocaine, worth just over £21million on UK streets, following a high octane 12-hour chase across the Caribbean.

After receiving information that a suspicious-looking vessel had been spotted by a Maritime Patrol Aircraft HMS Argyll, which is on counter-narcotic operations in the region, powered across the sea to intercept it.

Once she closed on the boat, the ship launched her onboard Lynx helicopter to confirm it was acting in a way typical of drug smugglers, before sending her sea boats across to capture the crew and contraband.

HMS Argyll’s Commanding Officer, Commander Paul Hammond, said: “My team and I knew that a swift and correct interception was required in this case. We worked well with our international partners to give ourselves the best chance of success and I used the exceptional capabilities of a modern warship, including sea boats and the Lynx helicopter, to detain the crew and seize the drugs from the target vessel.”

Once onboard the small power boat, known as a go-fast, the US Coast Guard Law Enforcement Detachment (LEDET) and Royal Navy sailors discovered bales of cocaine wrapped in bin bags.

Five people also found on board were detained in HMS Argyll and handed over to US justice on Friday (22 Aug).

While in the Caribbean the Royal Navy works with a LEDET team from the US Coastguard which embark on their ships for counter-narcotic operations.

“HMS Argyll is a tremendous ship with a great team on board,” said the Officer in Charge of the US Coast Guard LEDET. “It is a testimony to their professionalism that we have captured such a large amount of drugs and a number of smugglers after such a short time on patrol.”

Pictured: On 21 Aug 14, the 18 bags of seized narcotics were transfered to a US Coastguard vessel for transfer to the United States.