Scotland is the only part of the UK to have seen an increase in year-on-year spending in each year since 2013/14 to £2.1bn, supporting around 12,400 direct jobs in Scotland according to Ministry of Defence figures.

Direct jobs supported by MoD expenditure in Scotland has increased by 22%.

Compared to the previous year, Scottish expenditure increased by almost 15% in 2019/20 and its regional total now accounts for a little over 10% of all MoD expenditure with UK industry.

The Ministry of Defence say that this was driven principally by increased in-year payments to BAE Systems Surface Ships Ltd relating to the manufacture and demonstration phase of the Type 26 frigate programme out of the company’s Glasgow shipyards.

“In the case of Scotland, and compared to the year before, total MOD expenditure in the region was substantially higher in 2019/20. The higher payments discussed earlier in the Shipbuilding sector accounted for an additional 1,300 MOD supported jobs in the industry. Meanwhile, provisions for P-8A infrastructure at RAF Lossiemouth and the replacement of the Glen Mallan Northern Ammunition Jetty has strengthened jobs supported in the Construction industry by a further 700 FTE jobs. 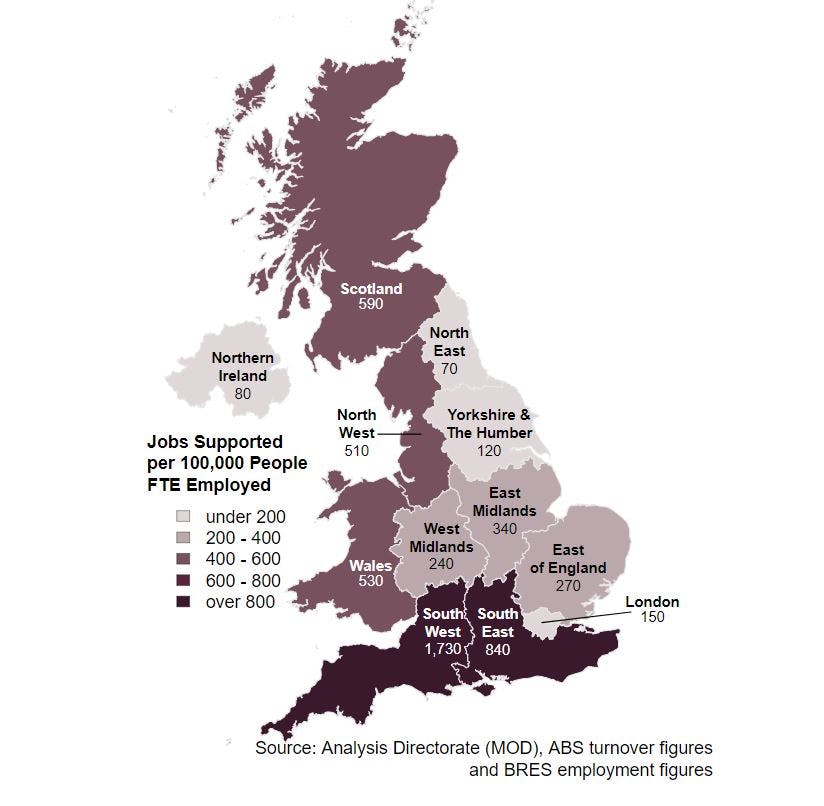 Interestingly, despite decreases in year-on-year expenditure between 2018/19 and 2019/20, both the East of England and Yorkshire and The Humber saw a rise in direct jobs supported.

You can read the full report spending report here.

I hope the Scots who want independence are counting.

Hi Geoffrey. It is good to see Defence projects spread around the 4 nations of the UK. With regard to the influence this might have on the support for Independence I would think that a majority of Scots would not be swayed by this type of comment-in fact it could be counter-productive. I would rather make a positive case for a United Kingdom in which we help each other in an equitable and sharing manner and emphasise the many good reasons why we should stay United- a Union that saw its origins over 4 Centuries ago, a shared History, Geography,… Read more »

ps-forgive me for repeating my sentiments in various threads here but what could be more important than the integrity of our Kingdom? Just think about the nightmare that would be the splitting up of Armed Forces, assets, establishments, bases etc-to what end?

Interesting point. Many Scots, keen on independence, seem to think that the UK Government would happily and meekly give new Scotland her ‘share’ of military manpower and hardware – I am not sure it is going to be like that. No such thing as a free lunch!
For rUK to give away assets would leave rUK short.

Hi Geoff I was born in Wales of Cornish parents but I have spent most of my life in England having found time to marry a lady from Neath in South Wales. My sister is married to a Scot and I once worked for the Bank of Scotland based in Edinburgh….bur more seriously I am steadfastly in favour of the Union but you will find that this forum is full of posts from SNP types talking absolute rubbish about the UK.and the so called lack of interest shown by the English in their plea for independence. Everything you say has… Read more »

“but you will find that this forum is full of posts from SNP types talking absolute rubbish about the UK.”…. Really Geoffrey ???? There’s one or two but I’d say the majority are mad passionate SNP haters which spills out to a generic anti Scottish vibe. Christ even I’ve winced at some of it and I think the SNP are awful for a number of different reasons. As an aside, I’ve been doing a bit of nosing about and while there’s a fair chunk of hope tossed in, I’m getting the vibe that Salmond has some kryptonite on Wee Jimmy… Read more »

You know Andy….your right. What I should have said is that there are regular reports about SNP media nonsense that need to be blown away. Stay safe.

Morning Geoffrey, can’t argue with that. Some of the stuff that makes it to ‘print’ on here is pretty obscure and I sometimes think it gives it wider distribution but that’s up to the site owners. Its gives us something to get worked up over too. 😉

Well said Geoff. The benefits of the UK need to be made the case for until some folks realise the madness of breaking up the UK. ??

Where’s the bloke who Slagged off the South West then ? The whole of North Devon is laughing at you bud……

Why is this in international news ?