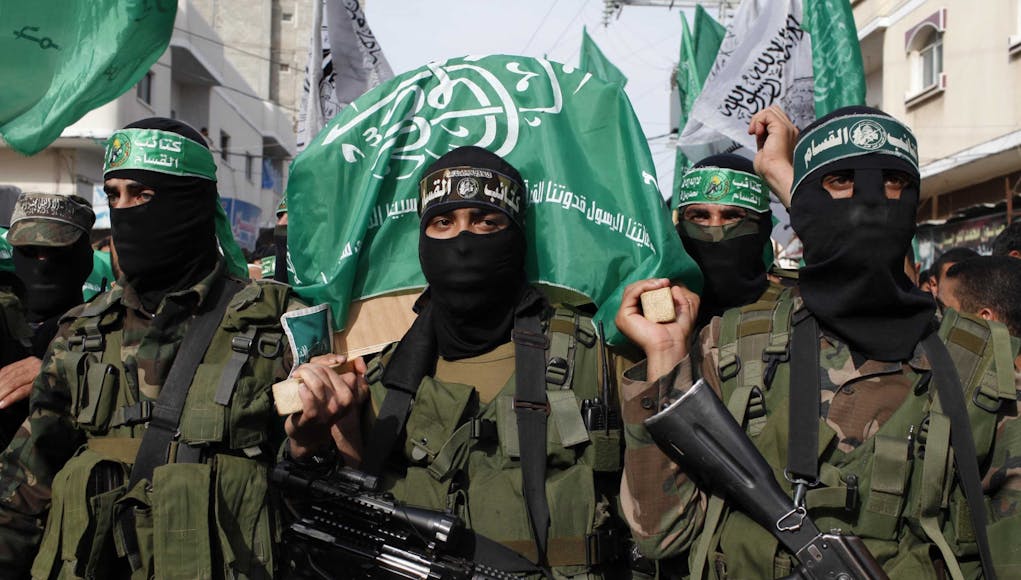 That some of the Muslim Brotherhood members in Palestine had rebranded themselves as Hamas was first revealed in some pamphlets in 1987. In that year, during a Palestinian uprising, now known as the First Intifada, against Israel’s occupation of the West Bank and Gaza, Sheikh Ahmed Yassin and six other Palestinians founded Hamas; as an offshoot of the Muslim Brotherhood movement, it is a Sunni Islamist organisation. Despite this new arrival, Israeli military and intelligence was still focused on Fatah, and strangely continued to maintain contacts with Gaza’s Islamic activists. Numerous Islamist leaders, including senior Hamas co-founder Mahmoud Zahar, met with Yitzhak Rabin, then Israeli Defence Minister, as part of “regular consultations” between Israeli officials and Palestinians not linked to the PLO.

Hamas is an acronym for Ḥarakat al-Muqāwamah al-ʾIslāmiyyah (meaning “Islamic Resistance Movement”). The Arabic word ‘hamas’ means ‘zeal’ or ‘enthusiasm.’ Hamas published its “Hamas Charter” in 1988. The charter states that “…our struggle against the Jews is very great and very serious…” and calls for the eventual creation of an Islamic state in Palestine, in place of Israel and the Palestinian Territories, and the obliteration or dissolution of Israel. Article 13 of the Charter states; “There is no solution for the Palestinian question except through Jihad. Initiatives, proposals and international conferences are all a waste of time and vain endeavours.”

Hamas carried out its first attack against Israel, in 1989, abducting and killing two IDF soldiers. The Israel Defence Forces had obviously been keeping watch on Hamas, despite their ‘turning-a-blind-eye’ to Islamist activities, and they immediately arrested Sheikh Ahmed Yassin and he was subsequently sentenced to life in prison. Israeli also deported 400 Hamas activists, including Mahmoud Zahar, to South Lebanon, which at the time was occupied by Israel.

Perhaps surprisingly, Hamas itself is not a UK Proscribed Organisation, though its military wing, the Izz ad-Din al-Qassam Brigades, created in 1991 and named after Sheikh Izz ad-Din al-Qassam, the founder & leader of Black Hand in the 1930s, most certainly is.

The al-Qassam Brigades really came into their own in 1992/3, at the time of the Oslo Accords. These accords were a set of agreements, signed in 1993 (Oslo I) & 1995(Oslo II), between Israel and the PLO, which included the recognition by the PLO of the State of Israel and the recognition by Israel of the PLO as the representative of the Palestinian people and as a partner in negotiations.

The Oslo Accords also created the Palestinian Authority, whose functions are the limited self-governance over parts of the West Bank and Gaza Strip. Hamas & therefore the al-Qassam Brigades, being unrepresented in these negotiations, were naturally violently opposed to them; didn’t recognise the agreements and did all they could to block/derail the whole process. Their use of suicide bombers, against Israeli military & civilian targets, became prevalent in 1993, and continued through to 2002. 2001 saw the first use of “Qassam” unguided rockets being fired indiscriminately from Palestinian territories into Israel.

During 2003/4 the Brigades suffered serious losses opposing Israeli Defence Force incursions into the West Bank & Gaza; including Sheikh Ahmed Yassin, who was killed in a targeted Israeli airstrike in 2004. In the West Bank, their presence was virtually wiped-out, but in Gaza there was a huge pool of willing replacements. In 2005/6 there was an uneasy truce between the Palestinian Authority & the IDF, coinciding with Hamas’ success in the Palestinian Authority elections. The conflict between Hamas & Fatah continued unabated however, including the assassination of Fatah representatives Gaza, and the removal of Hamas from the West Bank. Qassam Brigade Rocket attacks recommenced in 2006, and continued until the IDF entered Gaza once more in 2008. This cycle has been repeated in recent years.

In a recent interview, Efraim Halevy, a former Director of Mossad, when recommending that Israel negotiate with Hamas, said “Hamas can be crushed, but the price of crushing Hamas is a price that Israel would prefer not to pay.”

We Will Rock You – The Resilience and Importance of Gibraltar