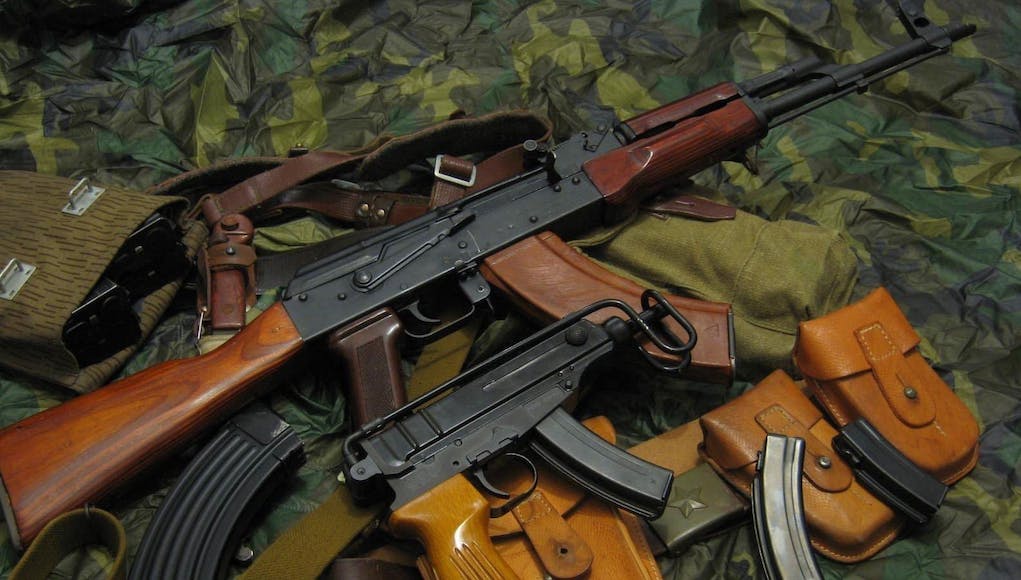 There is a debate as to whether the banning of the AK47 would impact terrorist organisations and reduce the capability of insurgences?

Why? It is the fact that the AK47 is one of the most, if not the most widely used weapon in the developing and the developed world.  It is the weapon of choice because it is durable, effective, cheap to produce, can be produced locally through the use of stamped metal, and its ammunition is widely accessible.

However, just purely banning the future supply of AK47s will do very little to halt the supply of weapons to terrorists operating under the banner of the Islamic State or any other terrorist group. Most groups have local small arms factories which can machine press these rifles. Many of these armouries are seen in the Northern provinces of Pakistan, and other countries.  Plus, the cost of the AK47 is so cheap. It can range from $50 to $1000, with the price determined by location.

It has become a symbol for terrorists and insurgents worldwide. Osama Bin Laden was filmed holding a AK74 rifle carbine (his weapon of choice). In addition, on television, you will probably have noticed not just terrorists but government forces in conflict zones such as Iraq, Syria, and Pakistan to mention a few using these weapons. The AK is a weapons platform for many nations worldwide.

During the Soviet Union era, many countries including those in the Eastern bloc, Africa, Middle East, and Asia were supplied with subsidised versions of the AK 47.

It is a fact that the AK47 has been featured on the national flag of Mozambique, which was once an ally of the Soviet Union.  These weapons, a product of Cold War geopolitics are still being used, and have subsequently been repaired or remade in local weapons factories.  The company in Russia which makes AK weapons has claimed that it is in fact a majority of foreign manufacturers are producing AK47s.

It would be impractical to ban such a weapon due to the issues raised. What would be more beneficial is to target the financing of terrorism worldwide, and stop the supply of weapons more broadly, including heavy weapons, missiles and mortars.

It was a well known fact that Colonel Gaddafi supplied AK47 to Irish dissidents of the IRA during the height of the troubles, with shipments sent from Tripoli. The Gaddafi regime was a big supplier and financier of terrorism worldwide, and also provided its territory for terrorist organisations to train with the weapon.  Most dissident groups had training camps there to do rifle training.

In popular culture, we see many films portraying terrorists carrying AK47s.  One such film, Patriot Games (1992) based on the Tom Clancy (1987) novel by the same name shows part of a splinter cell of the Provisional Irish Republican Army training in Libya, firing AK47’s on a shooting range.

Simply banning the sale of one weapon will not do anything. Furthermore Western governments including the United States and others have sold Soviet made weapons to rebel groups friendly to their governments, which have gone into the hands of ISIS affiliated groups as Syrian rebels funded by Saudi Arabia have switched sides.

The complexities of Middle Eastern politics means that there is a free flow of weapons and material to different groups. Targeting the financing of terror, is better than just simply banning the import of the AK47s.

What utter nonsense is this, sounds like the sort of totally iniffective, high minded idiocy that only a particular liberal elite element in our society could come up with….

We already have UN Arms control and that only works with countries like ours, most of the world widely ignore it!

This is not a worthy article for the ukdj.

How is this not a worthy article? It’s stating that a ban on the weapon wouldn’t work.

Show me evidence that a worldwide ban is being suggested by credible legal authority.

The article is based on a nonsensical argument that no one in authority has suggested, the story has no basis.

I know Obama imposed a ban on the import of AK type to the USA by executive order, but that’s about it.

I agree. This site does not do very good opinion pieces, they are better at reporting the news.

I think the rumours that a long list of UK owned equipment is up for sale was circulated at DSEI 2017 would be of more interest.

For those that take in an interest in UK defence matters some of those items on the list could be predicted but I must admit talk of HMS Scott is a surprise to me.

I saw that article, the government is looking to sell 85 Warthoggs for 500k vs the 1.8mm they originally paid for them.
If the MOD had purchased them from the treasury I wonder if they would have got them for 500k or forced to pay the full asking price. It is really stupid that we are selling off these Vehicles but keeping the much older Vikings due to bureaucracy.

My understanding is that MOD has to purchase at the original contract price of the UOR rather than the current value.

Warthog was a great success in Afghanistan, of the 17 IEDs attacks no crew member was killed. They can virtually go anywhere and have excellent protection.

Given the likely threat that the UK faces over the coming decades we should be ordering more of these vehicles not getting rid of them for a fraction of their true worth.

I agree they performed extremely well, I can also see why the MOD would refuse to pay the original price when they are 7 or 8 years old and could buy brand new for the same price. It’s just bureaucratic nonsense that is wasting tax payer money. The £40mm we get in the sell off won’t even cover the procurement costs of new vehicles.

I think the article is critequing the futility of such lofty ideas. A bit like wishing away nuclear weapons that people still believe is achievable. Lets hope they never get their grips on power.

if all weapons sales were banned they would still get hold of them or quite simply build there own,the human race has only ever known how to kill or destroy and it will never stop,and does not help with putting captured terrorists in a prison cell as they spread their warped minds to other people in prison who think they have been badly done to as they were caught committing crime so they are easily brainwashed..it would be better and cheaper just to end of life captured terrorists plus why should taxpayers money be used to allow them to breathe..just… Read more »

1. To clear up confusion Obama did not impose a bane on AK type rifles being imported. What he did was impose a ban on import from Kalashnikov Concern and its subsidiaries. This was done as a part of sanctions on Russia the most recent round of sanctions added Molot Concern. In the US you can still buy semi-auto AKs from numerous countries the only other country on the no rifle list is China due to breaking import laws in the 80s and 90s. 2. They need to find a new image department because the photo they chose is of… Read more »

[…] Why an international ban on the AK47 wouldn’t work – It is the weapon of choice because it is durable, effective, cheap to produce, can be produced locally through the use of stamped metal, and its ammunition. the. […]

A guide to the Queen Elizabeth class aircraft carriers