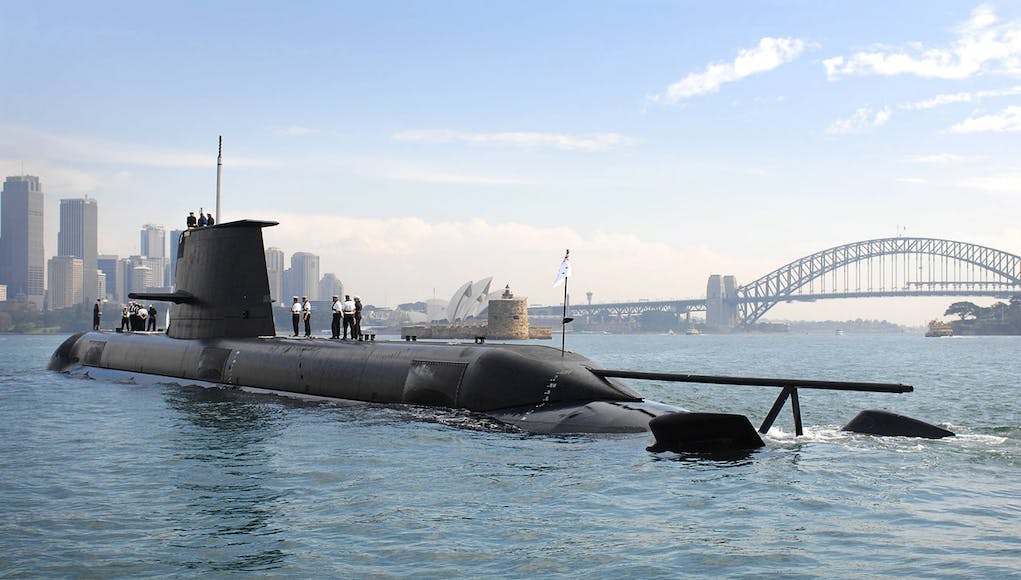 Documents released under a Freedom of Information request suggest that the Royal Australian Navy could again base its submarine fleet out of Sydney Harbour as it looks for ways to accommodate its soon to be doubled submarine numbers.

The request was made by South Australian Senator, and former submariner, Rex Patrick who was investigating the navy’s plans for its new class of submarines with several documents being released. The main report was written by Command D. L. Stevens in 2011 but remains the current baseline of thought, a more recent summary from September 2017 describing it as “by far the most detailed specific review into submarine basing”.

Senator Patrick, said it made “perfect strategic sense for Australia to have a two ocean submarine force posture”. Particularly in light of the recent commitment to double the fleet by replacing the existing six Collins class submarines with twelve Australian built submarines of the French Shortfin Barracuda design.

Options indicated within Sydney Harbour include the existing main naval base at Garden Island, the smaller HMAS Waterhen which currently hosts the mine hunting fleet or the old naval dockyard at Cockatoo Island. The latter however is considered extremely unlikely within naval circles. The report notes that basing up to four future submarines at Garden Island could be managed without “substantial new investment in buildings or wharves”.

The review ruled out Adelaide, Hobart, Gladstone, Port Stephens and Twofold Bay. Adelaide remains however the preferred location for deep maintenance at the ASC facility. Alternative ports in NSW including Jervis Bay and Newcastle were listed as considerations, but ranked below Sydney. Since the release of these documents the NSW State government has said that it would support a move to base submarines in a secondary port like Newcastle citing overcrowding in Sydney.

The submarine fleet was moved to Fleet Base West in Western Australia in 1999 during the introduction of the new Collins class submarines. The old submarine base HMAS Platypus, which had hosted the Oberon class fleet in Sydney Harbour’s Neutral Bay was then sold on for urban renewal. The decision has been controversial however, with the remote location being unpopular with families and blamed for the submarine force’s manpower shortages.

In a statement, Defence Minister Marise Payne stated the Navy and Defence Department were continuing to investigate long-term basing options for an expanded submarine fleet.

“No decisions have been made on the basing of the future submarine fleet as the first boat is not expected to enter service until the early 2030s,” she said.

“A range of initial submarine basing options are expected to be presented by Defence to the Government for consideration in late 2019.”

We could do with them here!
https://news.sky.com/story/uk-to-expand-navy-in-north-atlantic-amid-growing-russian-threat-11430721

Suprised this one hasn’t been picked up as a main story on here.

The RAN’s Collins class has not been a particularly successful one in service. They’ve been a major headache in fact. I’m sure they’ll be sold off to be some OTHER navy’s headache though. 😀 Speaking of the previous Oberon’s which WERE a huge success, most people have no idea as to the extent of the RAN’s covert sub operations during that period. Those crews deserve a sincere “Bravo Zulu” for their exploits.

All weapons platforms have their strengths and weaknesses and the Collins issues have either been substantially resolved or their crews have developed effective work arounds. In some ways its ‘poor reputation’ works in its favour tactically and their capabilities are ignored at an adversary’s peril. Even early in the class’s life the Collins class had repeated successes in multinational wargames. Here are some publicly acknowledged examples of how a Collins can screw up a surface commander’s day including: In 2000, Waller was the first Australian submarine to operate as a fully integrated component of a USN carrier battle group. Waller’s… Read more »

One of the reasons that the RN can be proud of the built-in-Britain Astute Class is that they are an incredibly complex form of engineering and construction to master. Consider that with the Collins Class Australia was generating an indigenous submarine construction industry from scratch with all the challenges that implies and a huge learning curve including developing their own unique solutions. For example, Australian researchers at the DSTO had to develop the boats anechoic tiles from scratch as the US and UK would not share information on the tiles used on their nuclear submarines. The construction and operational issues,… Read more »

With all due respect OZ, particularly to the crews, the Collins have been an admirable example of home grown engineering and design. However, as you referred to above, crews having to come up with work arounds to address engineering and design flaws is certainly not optimal and potentially dangerous if confronted during life and death situations. It’s taken decades for the boats to reach any kind of recurring operational status (much as will be the sad fate of the USN’s Ford Class CVs I fear) and it’s already time to replace them. http://www.abc.net.au/news/2016-04-26/defence-analysts-say-avoid-collins-mistakes/7360926 IMHO the Collins are an excellent first… Read more »

In regards to the Collins class, The main issue for them going on for over the last half decade hasnt been the boats them selves but government policy and maintenance. From the get go ASC (Government company that built and maintains them) was told what needed to be done, Government bureaucrats got jobs there in charge, Nixed those proposals and it went from a proper set up to them scavanging parts from one boat to fix another in the most inefficient way possible. Since the Cole report which pointed out all the same fixes they were told to do in… Read more »

It’s hard to escape a bad reputation though. The press in Australia are serial offenders fixating on particular defence projects, one part justified criticism to about ten parts absolute uninformed crap. Unfortunately the crap sticks. The F111 was a favourite whipping boy but went on to become a key strategic deterrent for Australia, an outstanding aircraft in service and the preeminent strike aircraft in the region for a decade or two. Then followed the criticism of the Collins and more recently the Wedgetail and F35. What all of these projects have in common is they are ambitious technologically complex projects,… Read more »

@Oscar Zulu Too true, Have actually read articles listing faults that had been reported fixed over a decade before. Those bastards dont care about facts but rather using the most dramatic news no matter how incorrect or out of date. Half expecting them to report that WWII has started. As it is some of the faults in the Collins class where of our own making for sure, But more then a fair share was also fault of overseas players. The F-111 had its faults, But was developmental and performed wonderfully for decades and was actually very important in keeping Indonesia… Read more »

An ‘interim class’ with the same CBASS Mk48 Mod 7 torpedo (a joint USN RAN funded development) and AN/BYG-1 combat system as the Virginia Class boats isn’t too shabby. A Mark 48 launched by either platform is a formidable threat to any surface combatant or deep diving nuclear boat.

‘ to double the fleet’

It mentions manpower shortages later on – they could barely crew 3 of the Collins class. Hopefully a return to Sydney would help, but I’d be surprised if it made that much difference.

If Britain wanted to commit to being a global allie, and let’s face it we need to come together in the face of China we should along with Australia/NZ fund another 8-10 subs (de) to be based down under, mixed crews operating internationally in the name of peace and prosperity while letting the Chinese know that they can’t have it all Their own way. Sooner or later they will try by force. We need to be ready

Absolutely zero chance of NZ ever operating submarines. They are flat out supporting their 2 frigates.

Also wouldn’t hold your breath for the RNZN to sign up to the Type 26. Type 31 maybe?

Strange how politicians and senior officers here and Australia cannot get their heads around the importance of getting the right home port for submarines.
Putting crews in out of the way locations does not foster a good family life in a difficult to staff branch.

exactly. another one of the key reasons blokes sign off. nobody wants to be posted to Barry buddon or saxa vord or catterick (the list is endless)so you vote with your feet and leave.

FFS Perth is not outer Woop Woop! The RANs Fleet Base West at Garden Island is about the same distance or closer than Faslane is from Glasgow and a commutable distance over the bridge from Garden Island to the mainland. Perth is also a bigger city than Glasgow (2 million plus in the Greater Perth area) with dare I say a more inviting climate and one reason why more Brits migrate to Perth than any other Australian city. It might be an issue for recruitment if your friends and family all live on the east coast of Australia but it’s… Read more »