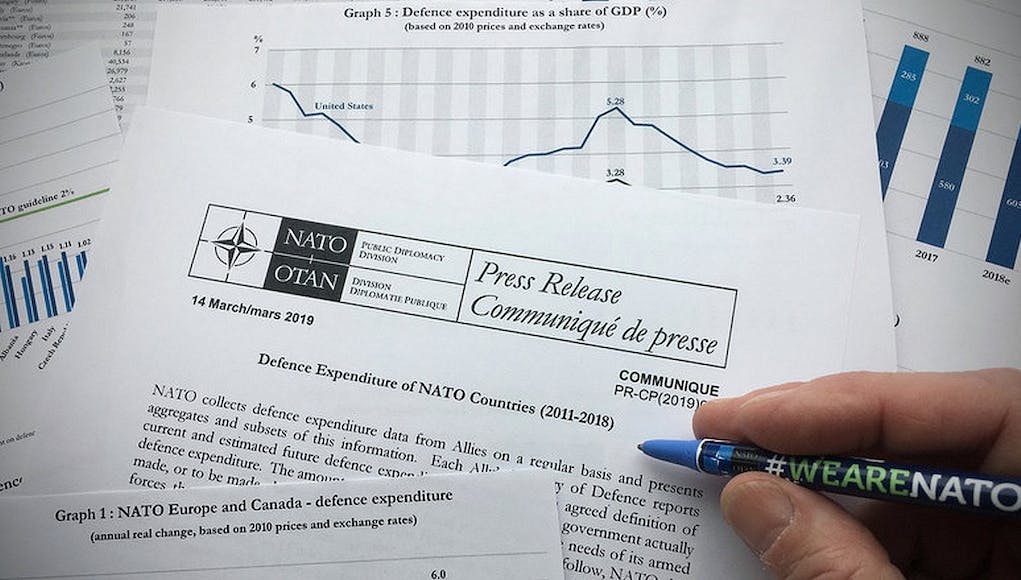 NATO collects defence expenditure data from Allies on a regular basis and presents aggregates and subsets of this information.

The Report shows that defence spending among European Allies and Canada increased by almost 4% from 2017 to 2018, and that in the period from 2016 to 2018, they have contributed an additional cumulative spending of over 41 billion dollars. “We expect that figure to rise to 100 billion dollars by the end of next year”, said Jens Stoltenberg.

Meanwhile, Germany, Italy, Spain, Luxembourg and Belgium were still nowhere near meeting the pledge. Spending in Bulgaria, the Baltics and the Netherlands went up by around 20% in 2018 compared to 2017. Along with Canada, Greece was the only NATO members to decrease defence spending in 2018.

European nations as a whole reached a five-year high at 1.51%.

In 2018, seven Allies reached the 2% defence spending guideline, up from three in 2014. A majority of Allies is also spending more than 20% of their defence expenditure on major equipment and according to 2018 national plans, 24 Allies will meet the 20% guideline by 2024.

The cut-off date for information used in this report was 12 February 2019. Figures for 2018 are estimates.

I don’t generally like Donald Trump, but he is right to put pressure on free-loading NATO nations to do their part. Glad to see the UK meeting the commitment…

He is right in one way but he is not in another… He makes out that the US is footing the bill and it is not. However they should be increasing their spend, especially those that are not even hitting 1.5%

Lol, if only I could believe he did that on purpose!

2% is meant to be the minimum! Now people are seeing it as the benchmark.

Take away pensions and other creative accounting fiddles, and Successor that has been added to the MoD budget, and the UK is well under.

WEll Danielle Successor is a defence item whether you like it or not. As to pensions I dont know but you should also a matter of balance look at other Nations “creative accounting” as well. However thats academic , more should be spent on defence and most of the Nations are takeing the “P..s and not bothering
AS to UK being WELL under you,re over egging the pudding

Some of those figures are remarkable. Who could blame the US for giving up on NATO

Trump is right, on this and many other things!

Why do these lists always exclude Iceland? Does anyone know? I know Iceland does not have armed forces but they do spend some money on defence for example by making Keflavik available.

Nah. The Bejamese defence budget is not shown either.

Maybe 1.2-1.5 is sensible, as with all industries, modern practices have made it cheaper to reach the same ends. In 2006 weaponry was not the same as deployed now, with the majority being from 80’s/90’s. You don’t have to drop as many bombs surely, or cover as much mud as you once did for the same effect. Granted the 2% investment has been a great part of this, but remove ww2 conventional methods, and you probably have nearer the 1.5%. To me this is just a tax, to support the US economy, and to perpetuate a pride and prejudice pipe… Read more »

Well you,ve lost me with your analogy in the first few words. However why did you choose 1.5% as sensible. Perhaps you just stick a finger in the air and guessed .
perhaps a darkened room is the answer

I dont see Ireland on the list. Perhaps so small a spend its beyond the scope of the expenditre

Ireland is not a member of NATO.