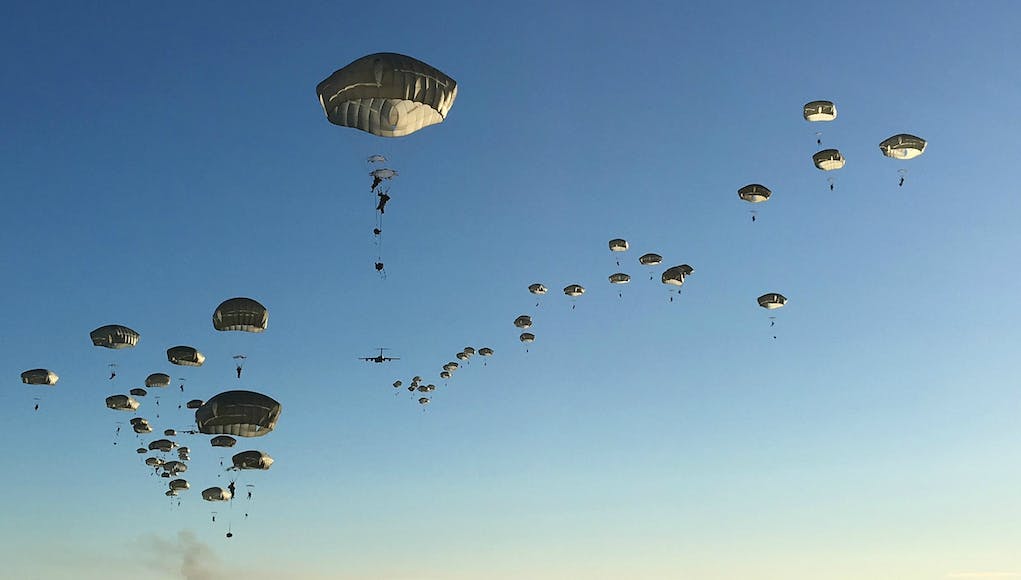 British paratroopers have jumped into Latvia alongside their US counterparts to show their ability to strike hard and fast in response to crises anywhere in the world.

In an impressive display of reach and capability, the British and American Paras flew into the Baltics directly from Fort Bragg, North Carolina, in a fleet of US Air Force C-17 Globemaster transport aircraft, before jumping into the drop zone (DZ) together with heavy equipment including vehicles and vital stores. This jump comes as part of Ex SABER STRIKE, a major US-led NATO training exercise spanning the Baltic states and involving around 18,000 troops from 19 member nations, designed to further develop allied interoperability and hone the participating soldiers’ understanding of one another’s tactics and operating procedures.

The preceding days saw the men of C Coy training and living alongside their American partners, doing several training jumps on US parachutes, and conducting dynamic live-firing packages on the ranges at Fort Bragg. Once on the ground, the paratroopers converged on a number of pre-designated rally points before moving off to accomplish their allotted tactical missions, negotiating challenging terrain weighed down with heavy loads of weaponry and equipment, and in some cases fighting their way onto multiple follow-on objectives.

Speaking moments after landing, Colonel Andrew Jackson, Deputy Commander of 16 Air Assault Brigade, described the exercise as ‘a clear and unmistakable show of airborne strength on a global scale’.

“There’s a reason why most of the world’s reference armies still maintain an airborne capability, because in strategic terms it’s not possible to get this many men and this much equipment anywhere on the globe so quickly by any other means.

This is a very public statement that the 82nd Airborne Division GRF (Global Response Force), with 16 Brigade as part of it, is able to project significant force at short notice.”

1 Fury’s Specialist Austin Hilden said he’d relished the opportunity to spend so much time with his British counterparts according to the MoD press release:

“We both go headstrong into a battle, we both love training and getting to shoot our weapons. They have a different Standard Operating Procedure from ours, so we get to see what they do in certain instances, and if, let’s say, we need them to flank to the side, we know what they’re going to do because we’ve trained with them enough.”

(Chris H) – Quote:
“If we need them to flank to the side, we know what they’re going to do”

So the Paras exist to meet the 82nd’s ‘needs’? What happened to ‘If the battle requires …..’ or “The agreed plan demands ….”

I think you’re taking offence to an intended compliment here.

Plus: “1 Fury’s Specialist Austin Hilden said..” so it was a normal US soldier commenting not anyone who makes decisions.

This is kinda positive and a negative. For sure it is positive that we have the skills and expertise to support the US and that they can rely on us to carry out a task (although after the mess with the base attack in afghan, not sure this fully true anymore, our lack of depth was highlighted). On the flip side, i really wish we would be in a position that we are not considered an extension of the US military and instead considered an independent thinking ally (yes it is a quote from a low level soldier, but still… Read more »

Steve wrote: “On the flip side, i really wish we would be in a position that we are not considered an extension of the US military and instead considered an independent thinking ally (yes it is a quote from a low level soldier, but still it feels like the whole US military/governement feels like we are there to support them).” From forces news last month: With smoke grenades exploding and under heavy fire from paintball guns, paratroopers from 3 PARA have been put to the test during training with the US Army. Soldiers from Colchester-based A Company, 3rd Battalion The… Read more »

although after the mess with the base attack in afghan,

That attack on Bastion (now know as Camp Shorabak) , which cost the US 2 men and 9 aircraft was due to a breach of the British sector guarded by Tongans. So if anybody is to blame, I start pointing at Whitehall for not putting their foot down on how lax the Togans were , and which put the entire camp at risk. (well not the whole camp as it was huge)

it was the RAF reg who decided to cut back on manned positions and stagger them out, not the tongans. It was also the RAF reg who got caught out for being the absolute chancers they are during that event. their one chance to prove they could do something useful and they ballsed it up.
shocking unit that really serves no purpose.
isn’t it funny how all the significant RAF bases abroad are protected by the army?

Who was or wasn’t to blame is past history, but the way it was talked about in America was not pleasant and there was a clear shift after it around allowing British lead. The conflict along with Iraq, significantly damaged the reputation of the British armed forces and I suspect we will not get a chance to rebuild it, since we are no longer setup to do something like France did in Africa, showing their forces capability as an independent force. Whether France can maintain such a large armed forces, is anyones guess, but today they have the numbers where… Read more »

Chris and Steve M, you’re probably both right. I think it was meant as an appreciative compliment. But equally revealing of a form of address which subconsciously reveals an arrogance which comes from always being tought that the world dances to America’s tune. I have been at the but end of such arrogance many times. Delivered always in the most respectful, polite and friendly way without any intention to insult or humiliate. I guess it just comes from years of being the most powerful country in the world. But it works both ways. I have often observed British senior military… Read more »

Which is why I am such an admirer of General Sir Mike Jackson who stood up to his American NATO commander General Wesley Clark and avoided WW3 in Kosovo.

Just read up on this, it’s amazing to see what goes on in war. Just to be clear too, I do think we are treated and act like at best “little brothers” by the US both militarily and on the world stage. Sometimes it’s healthy to disagree with your allies , something I wish the PM had done at the G7 with regards to US tariffs.

Whilst i do not think May is up to the job and doesn’t have the force of character to deliver, she does have an impossible mandate. To achieve a productive brexit, we have to get new trade deals with every country in the world (all at once, which i doubt as ever happened before), and to do this means we have to suck up to everyone in the world, at once, and so can’t push back at anyone. Imagine what could have happened, May pushed back at Trump, who in turn gets annoyed and makes our trade negotiations difficult and… Read more »

I hear ya, like most of us I just want it done with (properly) so we can move onward and upward with those trade deals. One Norwegian politician even seems to think we could be the next (re)emergent super power.

No fan of May at all but agree she has an impossible mandate to deliver. I believe she will fail but I don’t think anyone else would do any better.

I don’t think it is possible for her to fail, since what is the definition of fail. No one seems to agree what a good or bad deal would look like. I’m pretty sure either way, the moment the deal is done and we are out, there will be a power play to remove her. Ultimately, we have pretty decent trade deals today with our main likely trading nations and the best possible one we can get with the EU (open borders) and so any positives will be minor and won’t suddenly make us a super power, we are just… Read more »

(Chris H) Two points if I can? Firstly the PM. as people say, has a mighty difficult task over Brexit. She is to her credit delivering what the people voted for but she is facing an aggressive EU, a Labour party making party politics out of what should be national priorities and a handful of EU Luvvies in her own party making mischief at every turn. Plus a whole unelected House of Lords trying to defeat the will of the people in the biggest exercise in democracy since WWII and overturning Brexit. Second on top of that she has Trump… Read more »

Hi Chris It is Labours job to offer an alternative, it is their job to oppose as her majesty’s opposition, Brexit is highly political so you can’t expect the two main parties to play nicely hand in hand, that’s not how politics works and you know that, if it was the other way round the tories would be doing exactly the same. You’re right she does have a difficult job but she has also made it massively difficult for herself by her performance in the last election, she is being used to deliver Brexit and once it is done she… Read more »

@Chris H Whilst i agree with your overall point, i can’t help seeing that every line in the sand that she has laid down has been crossed. It is really impossible to know how the overall deal is going until its known in full, but so far it seems the EU is walking all over us. Which frankly isn’t unexpected, as we need them more than they need us and we lost the main battle which was being forced to settle on the cash up front. Yes we state that the cash is conditional on a deal, but realistically a… Read more »

Have to say having read your comments was going to agree to 1 then 2 but ended up agreeing with almost all. Very interesting guys thank you.

Interesting to read the article and your comments. I’m relation to Specialist Hilden’s comments, in what way would SOP’s be different between the two forces? I would have assumed that given the airborne function, SOPs might be similar?

I wonder how many paras or elements or 16 AA Bde is actually able to be airdropped several 1000 miles away from UK in one go, in practical and logistical terms.

I remember reading several years ago that the paras rarely get jump training and at one point only 5% of the paras were airborne ready: https://www.telegraph.co.uk/news/uknews/defence/9920516/Only-one-in-five-Paras-ready-for-jumps.html