Portsmouth is now home to two aircraft carriers for the first time in a long time.

HMS Northumberland and RFA Tideforce also returned to warm welcomes in Devonport, say the Royal Navy. The ships’ flights made their way to their respective homes at RNAS Culdrose and Yeovilton.

It’s been a busy three months away for the Portsmouth-based HMS Queen Elizabeth which hosted British F-35 Lightning jets for the first time at sea as part of the WESTLANT19 deployment. Her sister, HMS Prince of Wales, is expected to be formally commissioned into the Royal Navy in the coming days.

“Homecomings are always a special occasion, but to be returning to Portsmouth, with HMS Prince of Wales welcoming us home makes this a particularly special occasion. Two of her escorts, frigate HMS Northumberland and tanker RFA Tideforce, returned to Devonport today.”

The ships flights also made their way to their respective homes at RNAS Culdrose and Yeovilton.

“The five-week period of operational tests with UK F-35s from the UK Lightning Force was significant and historic. As the last pilot to fly Harrier from the deck of HMS Ark Royal in 2010, it filled me with tremendous pride to see UK fixed wing aircraft operate once more from a British carrier.”

What a great sight!

They truly are a fantastic sight Mike, they might be smaller than the giant US Carriers but they’re more advanced and better all round in my opinion…..no matter what the Americans might say.??????

I beg to differ. More advanced than an American Carrier? Please explain? I’m intrigued. The QE Class has limited range and a ramp. And it carries no fixed wing aircraft, only V/STOL. The QE Class Carrier is in the middle of: An (American Class) Amphibious Attack Ship and a Gerald Ford Class Carrier in terms of capability, firepower, and force projection!!!!! Indeed the QE Class is a fine Carrier but it’s limited in every spectrum. 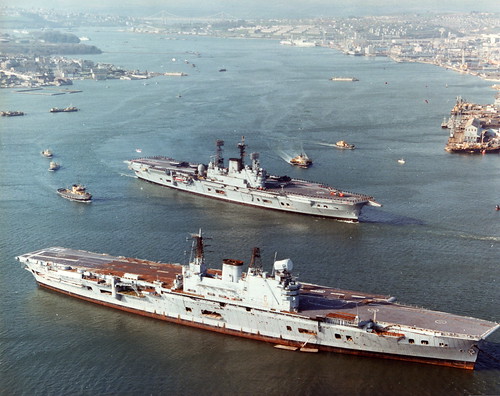 I have this photo as my screen saver!

Eagle and Ark Royal it is. It must have been taken in the late 70’s, Ark is leaving Devonport and Eagle is lying off Saltash waiting to go to the breakers. I think Ark went out of service in 1979, possibly earlier, by then Eagle was razor blades.

I was reliably informed that Eagle was kept for spares for Ark Royal, remember her moored there for a few years.

She is moored in the Hamoaze. The Torpoint ferries can be seen with Torpoint on the left. Really good photo and full of memories as my brother and I would fish around the Eagle. I was told that they cut through the decks to remove machinery to be used if needed for the Ark Royal.

Lovely photo mate, the comparison in size and capability between those and the new QE Class Carriers is massive but it’s still a great picture of our Naval heritage.????????Rule Brittania!! 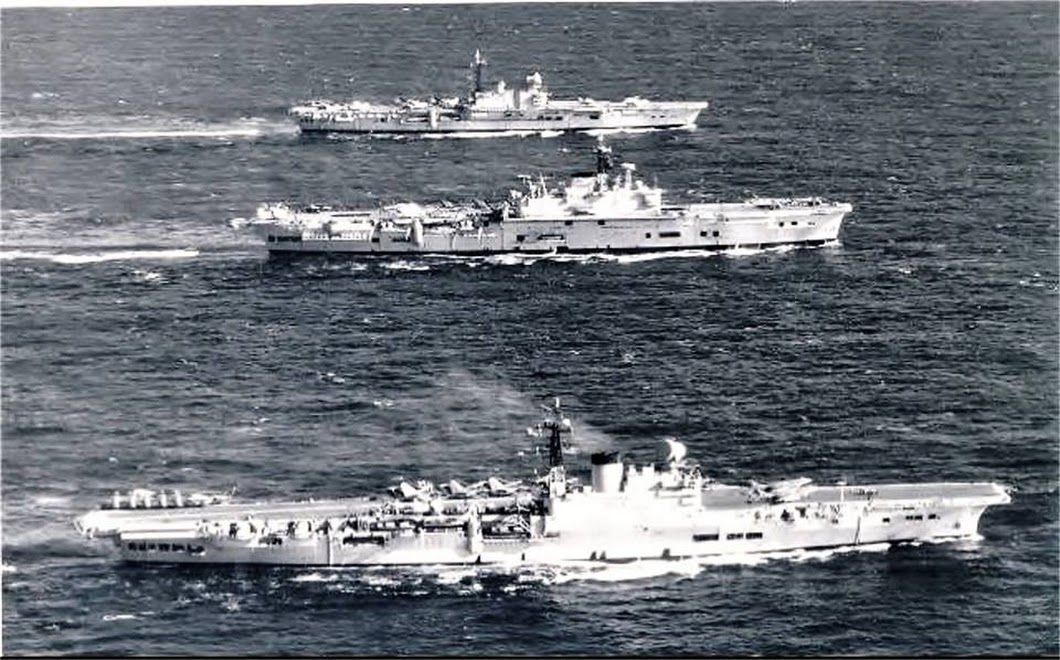 Another blast from the past.

From the bottom, Victorious, either Ark or Eagle but I suspect Ark before her final refit which included 2 984 radars, and Hermes in her fixed wing days. Victorious was scrapped in I think 1968 so the photo predates that. Vic has two Scimitars in the catapults.

Spot on Nick. Sad thing about Victorious was she had just finished a full rehab and suffered a fire that the MoD stated was too severe to fix. However, I’ve heard that it really wasn’t too bad and was an excuse to downsize the carrier force. Lusty probably has a better scoop on that.

True enough….saw her being broken up at Faslane. However the Labour Govt still maintained a good sized fleet and then the 3 Invincibles.

And fully correct about Vic’s refit. My late father was closely involved in the problem and always reckoned it could have been fixed in 6 weeks. He was pissed (American meaning!) about it until the day he died.

I have 2 Vic news magazines which were I think published on board the ship in the 60’s.

She also had a fully angled flight deck if I remember correctly.

Very informative and interesting, Nick. Thank you for sharing this!

Belay my last, I should have said 2 965 double bedsteads, not 984, which was the huge circular job fitted only to Victorious, Eagle and Hermes. Now that is a full deck, and trundling out of Pompey without a tug in sight.

What a cracking photo, now THAT is the deck of a strike carrier.Loved the Sea Vixen and Buccaneer.
Thanks Helions

One of my favorites of the period: 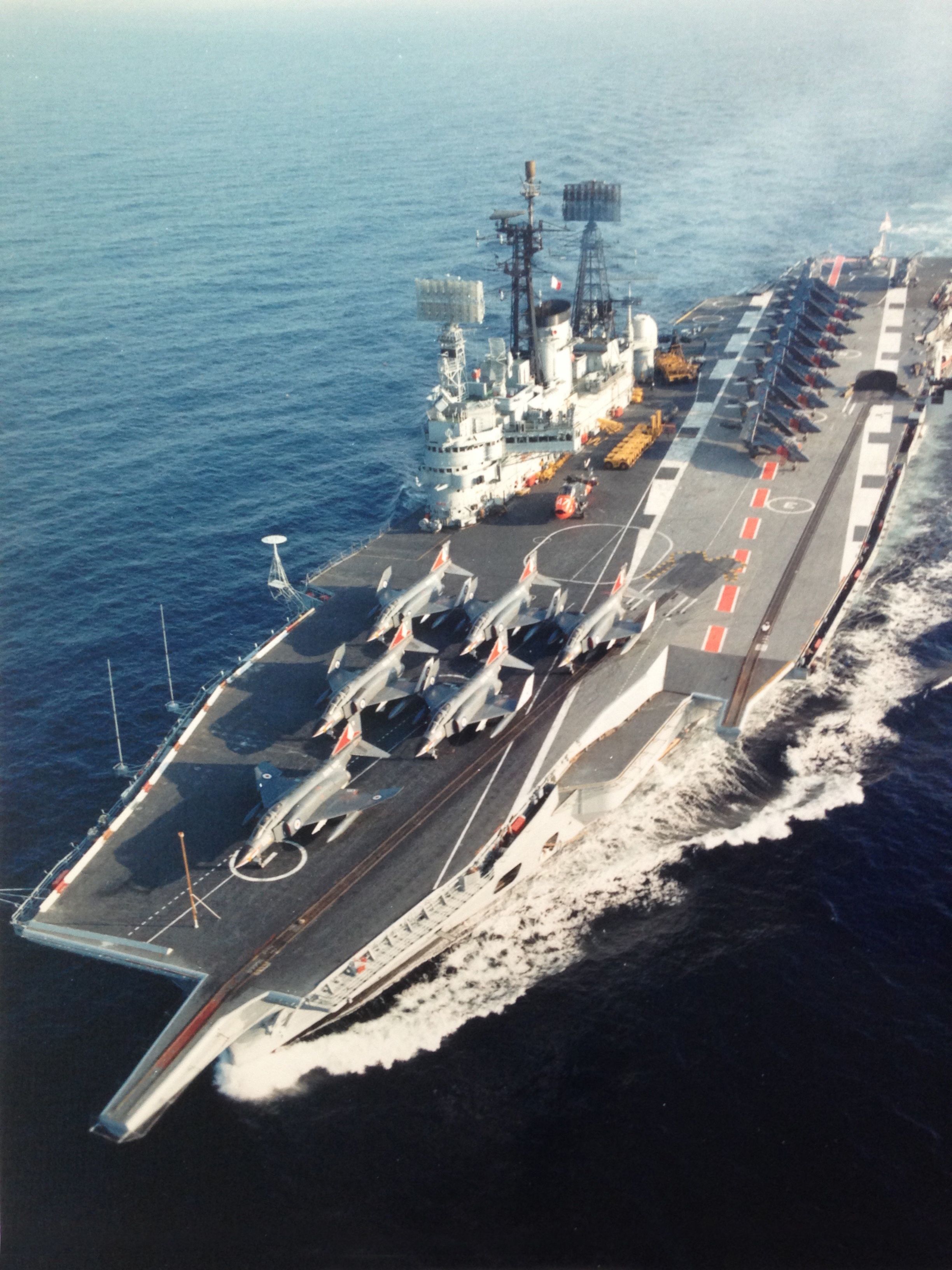 Wow Helions, what an archive of images you have, great shot of 899 and 809’s birds. Love the Phantom, just looks lkke it can hurt you.?

I think Nick has already answered that one for me. From the accounts I have heard, the damage indeed wasn’t as bad as one could be led to believe.

Thank you both for your observations!

Finally!
British shipbuilding at its finest.

This is a proud picture, two of our new carries together at Pompy for the first time. To the doubter and cynics, I say, take a good look and remember these vessels are British through and through. It’s time to be proud and supportive of our fine Royal Navy.

Statement of the week there Maurice!

Sums it up beautifully….

It makes me feel proud of my fantastic Country and immensely proud of our Armed Forces.????????????❤️❤️❤️❤️

Hard not to be impressed.

Our enemies will not be impressed, and that’s what counts. They will be delighted that we have wasted our resources like this.

what a truly wonderful sight.

I have been waiting quite some time for these pictures. Worth it.

Great. Finally proof that there is actually 2 carriers and they werent just moving QE between Portsmouth and Rosyth very quickly for photo ops ?

Haha, it could still be photoshop! ?

I know HMS Queen Elizabeth is called “Big Liz”.(Really imaginative name!)
What is the Prince of Wales called?
The Magazine Private Eye called Liz and Charles “Brenda and Brian”

The previous Prince of Wales was nicknamed ‘POW’. I’d imagine (and hope) the new ship would inherit that!

‘Lusty’ is also a ship nickname, so bonus points to anyone who can ID the ship in question.

Didn’t know you were THAT old Lusty! 😀

Off topic but, That’s some find!

“The wreck of a World War One German battle cruiser has been located off the Falkland Islands, where it was sunk by the British navy 105 years ago.”

I wish the jounos would get their facts right, she was an Armoured Cruiser. HMS Invinsible and HMS Inflexible were Battlecruisers and completely out classed the German vessels, on that occassion at least. It might sound a bit pedantic but to call Scharnhorst a Battlecruiser under plays the odds the German crews were up against, and they fought bravely on the day.

By the way, did you know there is a WW1 U-boat rotting away in marshes of the Thames estuary?

When Admiral Spee sighted the tripod masts of battlecruisers in the harbor at Stanley, the Falklands, he knew the jig was up. They outgunned and could outrun him. Lost his entire force except for an auxilliary.

Thought the Dresden escaped but was later hunted down by Glasgow at Robinson Crusoe island. Glasgow opened fire which violated Chilean territorial waters and Dresden was scuttled by her crew being very short of coal….

I had no idea.

I went to see this when I was working in Hamburg back in the ’80s.
It always amazed me that no signs were erected or attempts to salvage the U-boats had been undertaken, it was if the war had never happened and never discussed over that three year period of my employment.

I made sure the Royal Commission got that right when we shared that on our U-Boat Project website!

One simple question, do we have the base code for the f35?

If we still don’t it means we are not an independent country as we have no idea if the US could not the kill / deactivate switch if they didn’t agree with our actions, as was the case for early days of the Falklands, they only backed us once they realised we were not backing down (they were quiet willing to go against us until we forced their hands) which we would have been forced to if all our sea.bourne jets had been deactivated.

P.s. don’t forge there Suez, our closest ally has a track record of no being there when we needed them

I’m pretty sure we do. We threatened to pull out and demand our funding back if the original deal / contract / agreement was not met i.e. we were given access as originally agreed with the US government as a tier 1 partner. The main stumbling block was a US senator. There is a piece about in the F35 retry on wikipedia…

What a phenomenal sight!! Seeing those 2 beautiful Carriers together is fantastic for the Royal Navy and the people of Portsmouth, I’m extremely proud of our Armed Forces and it’s also good to see Northumberland and Tideforce back in Devonport. The South Coast is very lucky to have the majority of our Royal Navy and RFA fleet in their home towns, I wish I lived down there as I would probably go and see them every single day, living up on the East coast we have nothing like that here. Good luck to all the crews in our fantastic fleet… Read more »