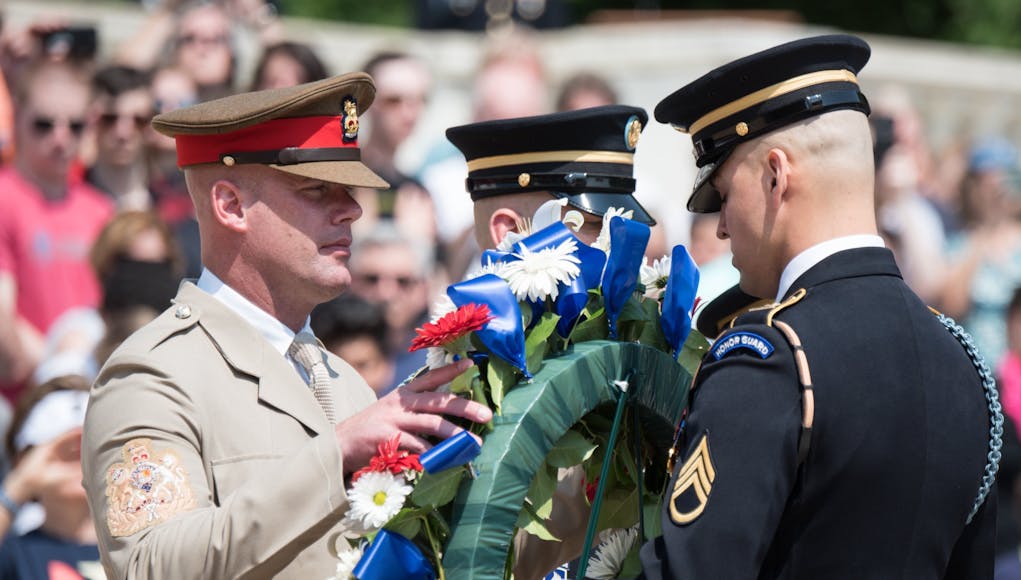 In what the US Department of Defense are calling a show of unity, the senior enlisted leaders of the American and British armies together laid a wreath at the Tomb of the Unknown Soldier at Arlington National Cemetery this week.

“Glenn is not only a personal friend of mine, but he is well-known globally,” Troxell said of Haughton, who is visiting the Defense Department this week.

“We have a very strong senior enlisted global network. And even though he is the Army sergeant major in the UK, he is known by leaders in the United States, in coalition [nations] and other services as well,” Troxell added.

Troxell said his military partnership with Haughton is fluid and dynamic. “We know each other so well it allows us to share information freely, and allows us to be honest with each other,” he said.

“That has to be built over time, and it’s important because one of the things that we focus on with our National Defense Strategy is reassuring our allies. That means more and more with people like Sergeant Major Haughton, I have to have a dynamic relationship because of the nature and the closeness of the UK and the US”

His position as the British Army’s first sergeant major has opened up the chains of communication between his sergeants, mid-grade noncommissioned officers and petty officers at the higher echelons, Haughton said.

“It’s another means of communication, and it’s worked both ways. The senior echelons of the army now see that this job complements the chain of command. It only challenges it when it needs to for the benefit of the enlisted,” he said.

“But for soldiers and officers, I think they look at this [sergeant major of the army] position as a benefit to the whole of the service itself.”

Troxell said this week’s meeting between he and Haughton — and particularly the wreath-laying ceremony at Arlington — is an opportunity to showcase the strength of the US-UK alliance.

“The greatest competitive advantage we have over any threat — whether it’s a nation state or a non-state actor like Islamic State, is our trained, educated, trusted and empowered enlisted force,” Troxell said.

Too bad Sgt.Maj.Troxell isn’t wearing the proposed (pretty much a done deal) retro pink and greens which are supposed to be reintroduced next year on the 75th anniversary of D Day. I like it!