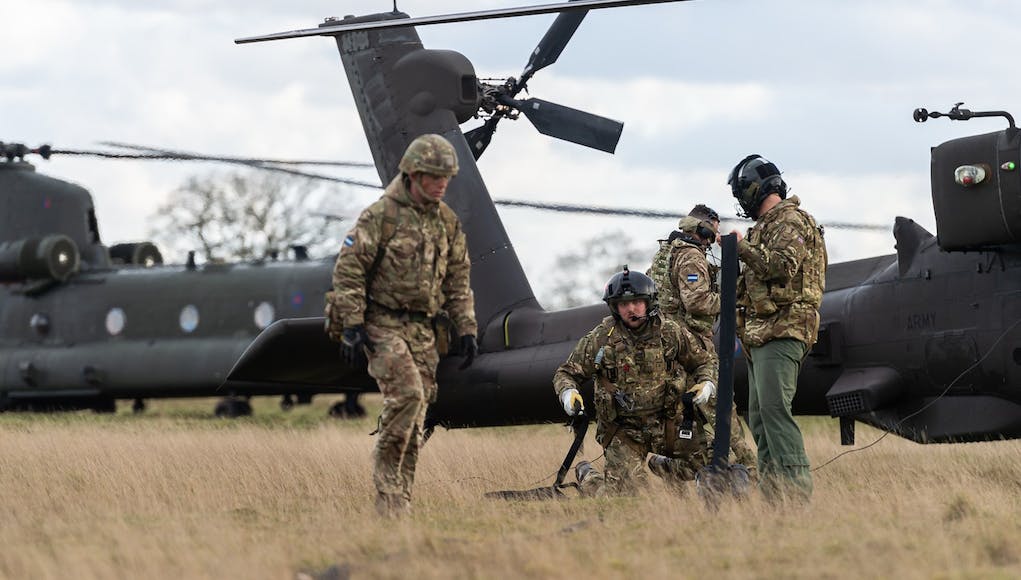 The pilots and ground crew of 3 Regt AAC’s 662 Squadron, based at Wattisham Flying Station in Suffolk, have been put through their paces this week ahead of the deployment, which will see them training in Germany and Poland in the spring.

“A key activity saw groundcrew set up a refuelling point on the STANTA ranges in Norfolk, flying fuel out in a Chinook to then top up the tanks of Apaches. On operations, these positions – the military equivalent of a Formula 1 pit stop – lengthen the range and loiter time of Apaches as they carry out strike missions in support of troops on the ground.”

Corporal Joyde Wilson is in charge of a team of seven soldiers who work to refuel and rearm the helicopters. He was quoted as saying:

“Working with Chinooks really takes on what the Apaches can do. We can move ground crew, fuel and ammunition out onto the battlefield to resupply the Apaches and extend their missions.”

Defender Europe 20 is a US Army-led exercise involving 35,000 troops from 18 nations. It aims to demonstrate the ability to rapidly surge combat ready forces into and across Europe to support the NATO alliance.

Can Apaches be refuelled in air by other choppers? Obviously not us british we can’t even refuel our maritime P8s. But the yanks. I love the fast jets they have used as tankers for other fast jets flying from their aircraft carriers.

I Wish we had that ability with a small number of f35s refuel using internal and Maybe external tanks , obviously well outside the area of interest and I know tanks will affect stealth. stealth tanks? ?

A buddy tanker could be used to top up tanks shortly after take off, as taking off as fully loaded as practicle from a carrier uses a lot of fuel. Over those short distances stealth is probably less important. A better solution would be a more basic aircraft tanker, such as a next-generation tilt-rotor, rather than using our precious few & eye-wataeringly expensive F35s. Besides, normal tankers usually have the range to deploy to most places worldwide, so we’re not dependant on carrier based refueling alone.

Let’s hope we have tankers forward based for when carriers are carrying out missions. We need the range.

No, the Apache (even US Army ones) cannot be refuelled in the air by another helicopter. It could technically do a hover refuel. Where the aircraft hovers a few feet in the air and a person hooks up the pressure refuelling rig. However, this is pointless, as you will be burning more fuel maintaining the hover, especially as the Apache has quite small fuel tanks. You can achieve the same thing by landing it on the deck and keep the engines and rotors burning and turning and then refuel.

Why do the RN refuel Merlin’s this way then? I thought it seemed pointless when they could just do what you said

The RN practices HIFR so helicopters can take fuel from ships when the flight deck isn’t available, or capable of landing such a large helicopter. And a carrier flight deck could be full,or damaged. So HIFR still gives crews the option to take fuel,and carry on the operation.

Not all flight decks are merlin capable. If the deck is small you can HIFR.

If the deck is black due to a defect or already has a helo on it you can HIFR.

I have seen a helo HIFR for hours as its wheels would not come down to land on. It kept hovering over the deck whilst the engineers tried to sort it out. In the end they built a soft cradle to land it on so the aircraft wasn’t damaged or lost..

Just like Hms Clyde with sea kings down the falklands they done pretty well using it that way, saving many passengers from that cruise ship out of control. Our opvs Atleast have options for longer range choppers. But wouldn’t choppers have to keep enough fuel to get back home anyway…

The Navy carries out helicopter in flight refuelling from the deck for good reasons. It wouldn’t do it if it was pointless.

When will our apache numbers dip to major low? Considering we’re using our ones frames ect for our new ones so there will be a time when we won’t have many I would suppose. Anyone know?

the first in re-build now are from the already withdrawn reserve, so assuming no further AH1s are withdrawn until the new AH2s are complete, there shouldn’t be any dip….not unless they decide to cut more

It depends on the weather and sea state. There will be times when the ship is pitching and rolling that it would be easier to refuel whilst hovering. The problem is still the amount of time it takes to fill the tanks versus fuel being burnt maintaining the hover.

We should be increasing the number of Apaches really. I don’t mind our low numbers of tanks if we had more Apaches as they’re each more potent on the battlefield than a dozen tanks.

Agree that the Apache numbers are too small (as are the MBT!), but we shouldn’t look at increasing the numbers at the expense of the MBT. They fulfil two similar roles but also two different roles. Both are designed to hunt MBTs, the Apache can attack more at the same time time, whilst the MBT can soak up more damage and still function. Where they differ is that the MBT can be used to hold ground whilst the Apache can roam about scouting for targets. Both have their advantages and limitations, so should be seen as the combined arms requirement… Read more »

Not at the expense of the MBT, no, but if I had to choose one to increase the numbers of and one to keep numbers as they are I’d increase Apache numbers and keep Chally 2 the same.

Steve, both are extremely important to the British Army and neither force should be reduced in my opinion. Reports and stories from Afghanistan clearly shows us that the Apache is crucial for close support and tanks are….well….tanks, they can turn a bad situation into a much better one in ground operations. This was shown in Iraq on numerous occasions where they got troops out of trouble many times and there’s no proof that tanks are an obsolete asset, quite the opposite actually. Ajax and Boxer are NOT MBT replacement, even the Boxer mounted with a decent sized cannon can’t replace… Read more »

To me, at the moment, UK Land Forces seem to be treated like the “weird, ugly relative who nobody likes and is kept in the kitchen at a party” and this is having a detrimental effect on equipment acquisition for the British Army and is extremely unfair. Our MBT numbers have dramatically dropped and they are in desperate need of an upgrade, preferably the Black Knight package, but at the moment the M.O.D have remained silent on the subject and this is disappointing really. Yes, we are doing the Ajax thing and in 2025 we’re doing the Boxer thing but… Read more »

A little off topic but I just wanted to congratulate the young lady who has become the first female to pass P Company. That is really an outstanding achievement, well done.

She clearly isn’t an average female though, we all know there’s some tough women out there. But I don’t agree with them fighting or joining let’s say sas or p comp, or marines unless in a background role like coms

Why not? If they’re good enough to pass P Company or 32 week command course then I don’t see the problem.

Agree mate, if a woman is physically and mentally able to cope with and pass the extremely tough para training then she is as hard as nails. Cam’s comment that she should only do a background job like Comms is pretty derogatory in my opinion.
When I told my wife that, she wasn’t happy at all…..she said “it’s a bit chauvinistic to say that, we’re in the 21st century FFS!!!”

Well 5ne yanks have done plenty of study’s on 5bis and 3 dry time women compromised their operations, I can’t remember the details but the yanks done the research so it’s out there. We want women in the millitary and everyone agrees, but in front line combat the men are compromised, not my words but they yanks who done the study.

Have a read of “One Up, A Woman in action with the SAS”

Several women have served in the 14 Intelligence Company, or “The Det” over the years. This unit then became JCU ( NI ) and its capability is now within the SRR, which I have heard also has women serving.

Good luck to them. In that sort of outfit they are a huge asset.

Yeah they are great in 5be intel role but there have been study’s by 5be USA saying women compromise front line combat, men wanting to protect them e t, there is a study done on it.

My wife wasn’t happy with that comment mate…..not at all.

Is she front line combat lol

The UK deployment is more than 2,500 troops and the US probably sending at least double, if not more, out of a total of 35,000 from 18 member states…..what the hell are the other the others deploying to this extremely important exercise on readiness to react to an aggressive action from an adversary..and why is it only 18 out of a total membership of 29 Countries? As usual, there will be an insulting token force sent from some of the biggest countries in Europe even though these Countries have enjoyed NATO protection from the Alliance for over 60 years. These… Read more » 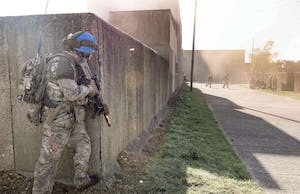