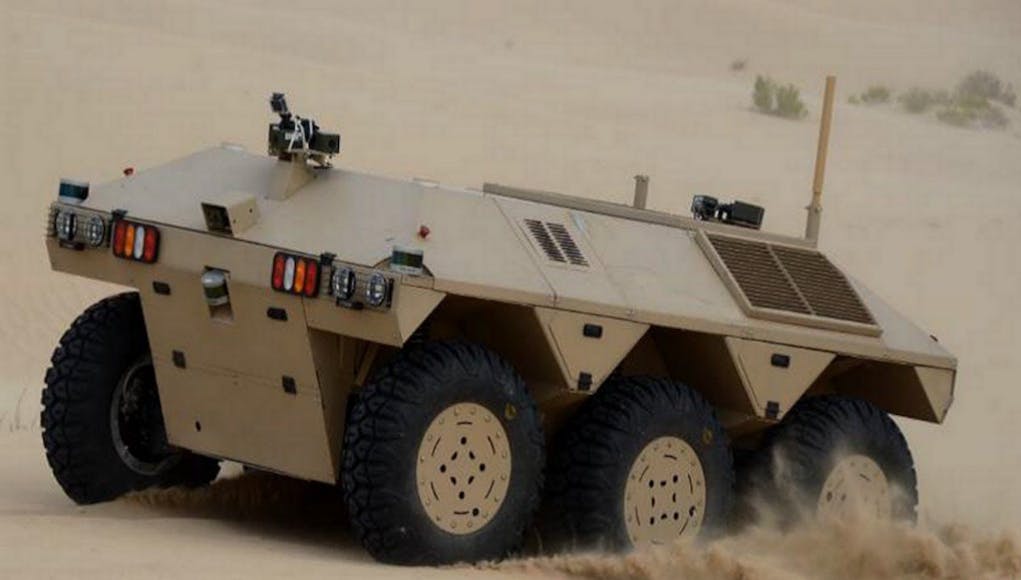 The British Army has launched the Autonomous Warrior (Land) experiment at the RUSI Land Warfare conference.

Autonomous Warrior, the 2018 Army Warfighting Experiment, will push the boundaries of technology and military capability in the land environment.

And one of the key areas it is set to test is the autonomous last mile resupply say the MoD. The ‘last mile’, which represents the extremely dangerous final approach to the combat zone, is crucial to ensuring soldiers have the food, fuel and ammunition to keep them alive.

“Autonomous Warrior will test a range of prototype unmanned aerial and ground cargo vehicles which aim to reduce the danger to troops during combat. The British Army is set to launch the four-week exercise on November 12, with a Battlegroup from 1 Armed Infantry brigade providing the exercising troops and taking responsibility of command and control.

British soldiers will test and evaluate the effectiveness of robotic and autonomous systems (RAS) on the battlefield. These technological advances will play a key role in the Army’s Strike capability, ensuring our forces remain unmatched on the global stage.”

“Our Armed Forces continue to push the limits of innovative warfare to ensure that we stay ahead of any adversaries or threats faced on the battlefield.

Autonomous Warrior sets an ambitious vision for Army operations in the 21st Century as we integrate drones, unmanned vehicles and personnel into a world-class force for decades to come.”

As well as demonstrating the vehicles during the last mile, Autonomous Warrior will also develop capabilities in surveillance which will greatly improve the effectiveness of long-range and precision targeting by service personnel.

The exercise is the result of a large collaboration between the British Army, Royal Navy, Royal Air Force, US Army, MOD, Dstl and around 50 industry participants.

If an UGV is not as imaginative as an human in finding ways to get the fuel, ammo and supplies that last mile, then the savings in lives of support troops will be matched by losses of frontline troops when they get over-run due to running out of essentials.

Unmanned planes, ships and underwatercraft are the future. However outside of perhaps small fire support vehchles operated by infantry to enable their firepower, until they can make a robot that can breach and clear a house ground UVs aren’t viable in my opinion. Lack of situational awareness, supply issues, inability to remove itself when stuck and frankly little cost benefit, technology has to SIGNIFICANTLY improve for them to be viable.

All in my opinion of course.

Glass Half Full
Reply to  Lewis

Certainly nothing meeting your house clearance specs yet but you might check out the latest robotic capabilities from Boston Dynamics such as Atlas and Spot on Youtube. Honda’s Asimo doesn’t seem to have the mobility of the BD robots but is quite advanced in dexterity. I could see a combination of the two tackling bomb, IED and mine disposal. UGVs certainly could provide unmanned load, transit and unload capabilities over extremely tough terrain.

Lewis
Reply to  Glass Half Full

Yeah, I saw those videos, scary stuff. Interesting how fast technology is advancing. And yeah, stuff like that is where we should be concentrating. Unmanned weapon systems used by the platoon level and small UV that can carry a units extra supplies, something that would also reduce the increasing weight burden on soldiers.

Given the scale of warfare in terms of human resources, the fact that a guy or two guys will drive a supply vehicle the last mile to the firing positions, surely does not really give any advantage. Versus the possibility that the automated version may be hacked and diverted/stopped etc. Either unit could be destroyed by enemy action (or friendly action). Slim margins only. In addition, who is going to have to unload the ammo/supplies at the destination anyway? An automated vehicle does not come with arms and legs for that element.

Glass Half Full
Reply to  Stephen

Check out the Boston Dynamics humanoid robot Atlas on Youtube for your automated loading and unloading. The the latest six foot tall version can run, jump, do backflips and yes lift and move loads. I’m not saying its ready for prime time or necessarily ever going to be suitable but its a lot closer to being so than I suspect many unfamiliar with it understand. And it doesn’t of course have to be humanoid. Their Spot version (think large dog size) could be fitted out for cargo handling. Both Spot and Atlas can tackle rough and uneven surfaces, hills, stairs… Read more »

reaper
Reply to  Glass Half Full

everyone’s seen atlas. it’s wank. can it piss in the sink and bang fat girls on a Thursday night, get up drunk and smash out an 8miler? if not, it won’t be accepted

During the 1930s the French developed the concept of using Renault UEs to deliver supplies to front line troops- unloading was done using a tip up trailer which could be operated by the crew within the vehicle, pallatisation meant that the receiving troops only had to open the supplies when under cover- a similar solution could be used with UGV supply vehicles