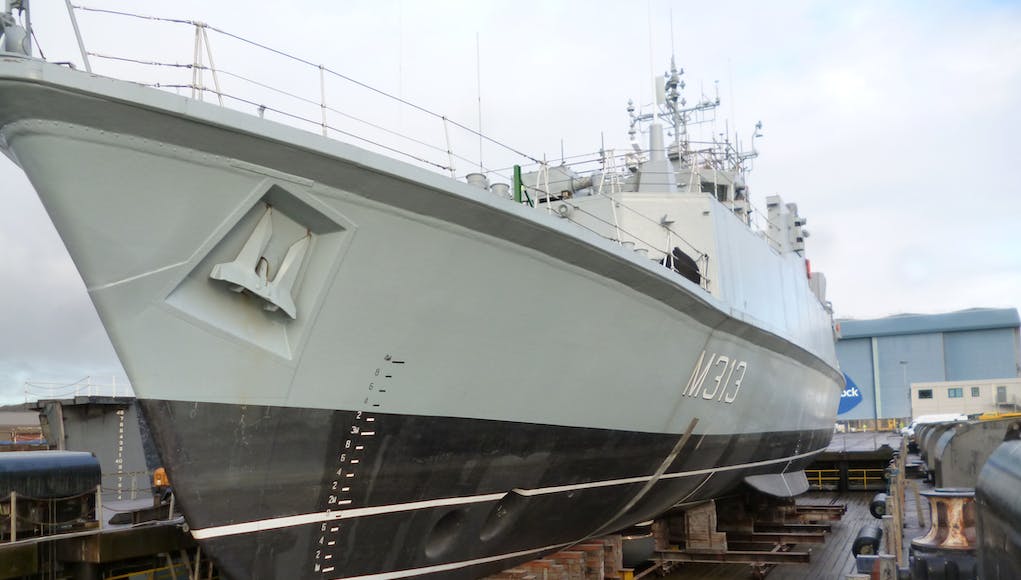 Babcock International has completed the installation of a capability upgrade on the first of three Estonian Navy minehunter vessels scheduled to be undertaken at Babcock’s Rosyth facilities in Fife.

EML Admiral Cowan – the flagship of the Estonian Navy and part of its minesweeping flotilla –underwent a five month docking period at Rosyth between July and December 2018.

Under contract by Thales UK, an upgraded mission package was carried out by Babcock on the Sandown-class minehunter, which included fitting the Thales Sonar 2193, an upgraded navigation system, as well as the Thales M-CUBE command and control system – along with several other upgrades and defect rectifications.

A team of 20 Babcock employees, including electricians, engineers, designers and glass reinforced plastic specialist shipwrights, undertook the work – working alongside Thales and Ship’s Staff to deliver the scope.

Admiral Cowan will now return to Estonia prior to undergoing trials in the North Sea in May to demonstrate full operational capability.

The second Estonian Navy minehunter vessel, EML Sakala, arrived at the Babcock Rosyth site in December 2018 to undergo the same package of work. This will be followed by EML Ugandi in late Spring 2019.

“We were delighted to upgrade EML Admiral Cowan for the Estonian Navy and look forward to carrying out the same package of work on her fellow minehunters, EML Sakala and EML Ugandi.”

He added: “Our Common User Facility in Rosyth provides first class docking and support facilities to undertake this kind of work and, with a skilled and experienced workforce on-site, we offer the complete package for visiting ships.”

Evening all
Good to see defence diplomacy, HMG soft power, at work.
Giving our allies good robust equipment, the latest technology and the best training. Sometimes looking at defence means taking a wider view and not just counting the number of vessels the RN has in the water at any one time.

Not forgetting that she’s named after the British Admiral who commanded the RN forces against the Bolsheviks that help to ensure Estonian independence. It’s good that people remember these things and former alliances remembered and renewed.

‘Helping our allies?’ And how, pray tell, is Estonia helping us? They stab us in the back in the EU, draw us closer to Russia than we should be, and offer virtually nothing in return. I mean, if they’re your definition of an ally then heaven help us all!

Is that old Hms Inverness ?, if it is then I’m glad it’s got a long life ahead of it. We are down to 13 minehunters now! Something the RN is among the best at… I hate the government, its pure choice what we spend on defence CHOICE and they choose to cut our forces to the bone… I’m 100% sure we won’t be getting into a world war anytime soon and the top brass know this so they cut cut cut! so we don’t need huge numbers and our millitary size is actually enough for two medium scale expeditionary… Read more »

RGR, following up on Sean’s comments about Adm Cowan, you can find a good account of what went on in 1919 in Adm Cunningham’s autobiography, A Sailors Odyssey, chapter 9. Cunningham was commanding HMS Seafire, with Cowan in HMS Curacao, that was in the days when you could send a cruiser with an Admiral embarked, and two divisions, 8 destroyers, to bolster the diplomats. I have not visited the Baltic’s but I understand that the memory of Walter Cowan is held in very high regard by the locals, and the standing of the UK is equally good since we helped… Read more »

Got to say the Baltic states are doing well in upgrading and modernising (within a budget obviously) their forces. I know a number of Estonian military lads and all are pretty tough and well prepared, and all are absolutely and utterly convinced that Russia will have a crack at them in the next 5 years.

And yet the flagship of the Estonian navy is a minehunter……

Their ground forces are the ones who will do the fighting, both organised and resistance groups. The Estonians put a lot of faith, and have a long history, of irregular warfare. The navy is purely about working with NATO minehunting groups.