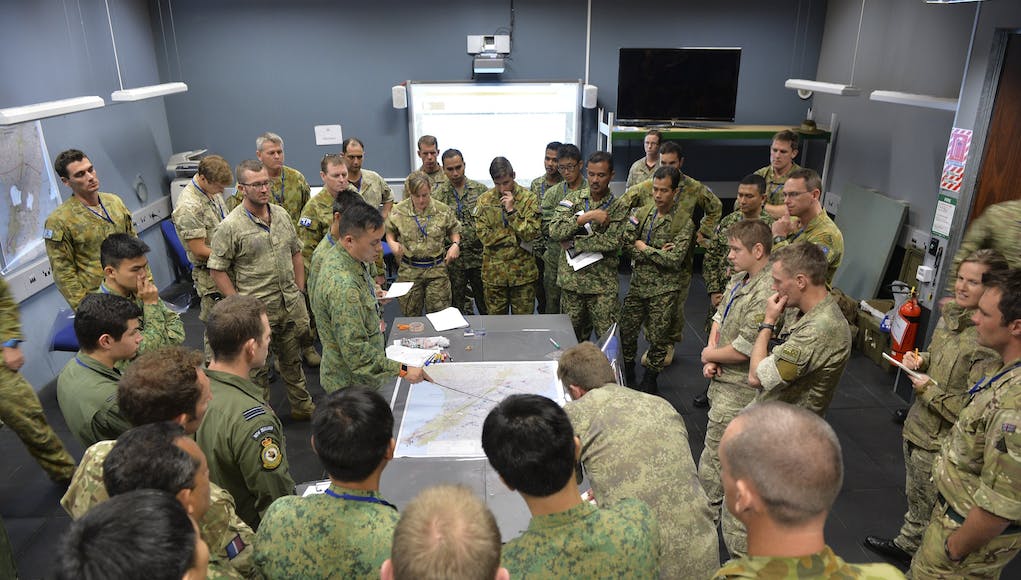 One of Britain’s longest military partnerships, the Five Power Defence Arrangements brings five Commonwealth members together and helps to enhance the regional security of Southeast Asia.

On April 1971, the UK alongside Australia, Malaysia, New Zealand, and Singapore, all Commonwealth members, gathered their ministers to issue a communiqué regarding a new defence arrangement, this was the birth of the Five Power Defence Arrangements (FPDA).

The Arrangements were established through a series of multi-lateral agreements between its five members following the need to replace Britain’s former defence guarantees of Malaysia and Singapore under the Anglo-Malayan Defence Agreement which also involved Australia and New Zealand. Therefore, in 1971 a new defence agreement was settled and signed with the primary purpose to reinforce the British military commitments with the two young countries of Singapore and Malaysia and to keep the strong defence ties with the Australia and New Zealand.

Originally established to provide air defence to Singapore and Malaysia the Arrangements’ exercise program has experienced an increase in complexity and scope. Following the increase in interest and enthusiasm of the members, the size of the joint military exercises enlarged, and its scope expanded. Alongside the air exercises land and naval forces from Britain, New Zealand and Australia are committed every year to hold military operations with their counterparts in Malaysia or Singapore.

According to the Five Power Defence Arrangements, in a case of attack or significant threat against Malaysia and Singapore, ministers of the five nations are to consult each other immediately for the purpose of deciding what actions should be carried up separately or jointly in handling such scenario with the objective to keep both countries safe.

However, no specific mention commits its member countries to intervene military in case of attack, and the FPDA does not make reference to exclusive economic zones (EEZ). Thereby the enforcement of the EEZ is an issue for that state, but a member may ask the others to assist in doing so.

In spite of that flexibility, it also provides defence co-operation amongst its members, establishing an Integrated Air Defence System (IADS) for the Peninsula of Malaysia and Singapore. This IADS is based at the Royal Malaysian Air Force (RMAF) Butterworth.

Moreover, there is annually a Defence Chiefs’ Conference (FDCC) hosted either by Singapore or Malaysia. The FDCC is the highest military professional forum of the Arrangements and is used as a relevant mechanism for dialogue and, therefore, interchange of ideas amongst the meeting parts. There is as well the Five Powers Defence Arrangements Ministerial Meeting (FDMM) with a focus mainly to gather the ministers of the five nations to reinforce the commitments and to emphasise the important role that the FPDA has within the context of regional security.

Alongside the military outpost in Brunei, Britain has a presence in the region trough a support facility in Singapore. The facility compromises the Naval Party 1022; a permanent naval repair and logistics support centre located at the Sembawang Wharf which is used by the Royal Navy’s ships when paying visits to the area.

About the British naval presence, according to Michael Fallon, British defence secretary, Britain will increase her presence in the area, and by the 2020s one of the two Queen Elizabeth-class aircraft carriers will be in the region: “We have not yet scheduled the first deployments. But you can be sure in the 2020s, you will see one or other of these carriers in the Asia-Pacific”.

Regarding her position in Malaysia, Britain has a regular presence through the Royal Air Force (RAF) in the Air Force Station of the RMAF Butterworth, in the state of Penang in West Malaysia.

Australia also keeps a presence at RMAF Butterworth as a way to show its commitment to the Arrangements. With Focus mainly on the No. 19 Squadron and a varying number of AP-3C Orion aircraft both of the Royal Australian Air Force (RAAF). Furthermore, the Australian Army keeps an infantry company, the Rifle Company Butterworth, for training in jungle warfare.

This station is currently the headquarters of the Five Power Defence Arrangements Integrated Area Defence for Malaysia and Singapore and involves personnel from all the Five Powers and has an Australian officer of the RAAF currently in command.

Concerning New Zealand, its engagement was highlighted in its Defence White Paper of June 2016. According to the White Paper, New Zealand, as a member of the Five Power Defence Arrangements, is ready to meet its commitments in case of a military action against Singapore or Malaysia.

The latest annual military exercises and Defence Chiefs’ Conference held by the five members occurred in October 2016, hosted by Singapore. The defence chiefs stressed the relevant role that the Arrangements play in improving co-operation and safety amongst its members and to the hole region. At the meeting, they also issued the Exercise Concept Directive that guides the future activities and the co-operation between the five armed forces.

The annual operation in 2016 was called ‘Exercise Bersama Lima 16’, and involved, according to the Ministry of Defence, ”71 aircraft, 11 Ships, 1 Submarine and 5 Ground Based Air Defence Fire Units”. Britain has committed ”eight RAF Typhoons, based out of Royal Malaysian Air Force Butterworth, and 45 Commando Royal Marines plus headquarters staff based in Singapore”.

As the representative of the UK Forces involved, Vice-Chief of Defence Staff, General Sir Gordon Messenger declared: “We are deploying RAF Typhoons, Royal Marines and HQ staff and this is indicative of how seriously we view this exercise”. Besides that, armed forces from the three branches of the five members participated including warships and aircraft from Australia, Malaysia and New Zealand.

So from its begin in 1971, the Five Power Defence Arrangements have become an important and credible military co-operation that holds the possibility to play greater roles in the regional defence structure. It also has roles to play in what concern counter-terrorism, non-conventional threats, anti-piracy efforts and disaster rescue.

Furthermore, the FPDA is a deterrent to external threats against Malaysia and Singapore and allows the UK alongside Australia and New Zealand to continue strategically linked to the region that is a source of growing concerns because of territorial disputes in the South China Sea and is as well an important pathway of valuable trade routes.

The FPDA also helps Britain to carry on long-standing military relationships with four Commonwealth allies, fostering closer co-operation and mutual trust. Therefore, despite its criticised flexibility, the FPDA is an important part of the security web of Southeast Asia, and its relevance discreetly grows through the years.

Hang-on a minute! How are we going to maintain one or other carriers in the Pacific? Won’t it need to be escorted by (probably) four frigates and destroyers and a submarine? Won’t that unreasonably stretch already depleted numbers of surface escorts? We simply can’t run two carrier groups simultaneously, assuming that we need one group in the Atlantic. Michael Fallon can’t possibly have thought this through properly.

Totally agree this kant is playing too much battleships in his office.

Nae danger we will be fighting piracy in Africa, carrying out drug trafficking ops in the carribean and as well as escorting Russian ships in uk area of interest all the while our presence in the mid east is needed.

When these carriers arrive I hope fecking logic is applied.

This was all about look what we have.

Has it not occurred to you that any or all of the five nations could contribute escorts for a carrier battle group?

[…] Ocean to participate in joint exercises with Australia, New Zealand, Malaysia, and Singapore. The Five Power Defence Arrangements, which were signed in 1971 after the bulk of British forces had withdrawn from the region, help to […]