A Joint Warfighting Assessment has taken place in Germany, with the UK’s 1 Armoured Infantry Brigade exercising within the US 1st Infantry Division as part of a multinational exercise say the British Army.

The exercise also sees the British Army work alongside German, French, and Canadian forces. Danish troops were also taking part and they provided a Battle Group working within the British brigade. The UK collaborates extensively with the US in concept development and experimentation. The designation of 1 Armoured Infantry Brigade as the experimentation brigade serves to reinforce this relationship and commitment.

According to a British Army statement:

“All of the countries taking part were NATO allies and this demonstrates that the UK stands by its collective defence agreement with NATO and its ambition to work more closely with our international partners to provide flexibility and capability when and where it needs it most. It also provides opportunity for all members of the Army to meet every challenge by training in all environments with all partner nations with the same strong bond and shared values.

Maintaining security is no longer purely a national matter and events over recent years have shown that threats take no account of national boundaries but are interconnected and interrelated. Exercises such as Joint Warfighting Assessment 18 sees staff from many nations working together to practise command and control of an operation within a fictional scenario. As a forward-looking and technologically advanced Army, it helps us to be ready for the challenges of the future, both at home and overseas.”

“This is a hugely efficient exercise because it brings five countries together and really starts to determine what are the human, procedural and technical issues that we can overcome. Having so much collective wisdom, thought and technical capacity means that we’re achieving wins far quicker.

What this means is not being insular, not just relying on our own technology but looking globally, understanding who we can fight alongside and whose technology we wish to be compatible with to continue to deter and if necessary defeat those threats to UK security. We were given the task around a year ago to redefine the way the British Army fights in the future. That has enabled all of us in the Brigade to think differently and to try and understand how we are going to harness AJAX (a new armoured fighting vehicle), MIV (the Mechanised Infantry Vehicle) and the new communications systems MORPHEUS to deliver us a more decisive future Strike Brigade effect.” 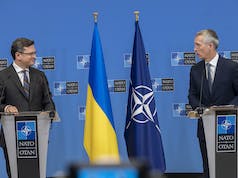 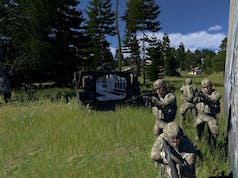 This highlights the one massive advantage the Russian have, they are one and organized.

The complete breakdown in fighting capability of most of most NATO nations along with the above Russian advantage could be decisive in any large scale lightning strike by Putin.

Lol. Do you honestly believe for one moment that Russias military has any chance against the US even without the rest of NATO? You’ve been watching way too much RT!

Take out the whole of NATO? Russian loss.

Try not to be so dismissive of your adversary.

Any Intrusion by Russia onto NATO territory will result in total war.

That’s why Russia will stay in their box.

Yes, Article 5 is all very good but it hasn’t really been truly tested. The war we had in Afghanistan, which was triggered by Article 5, is on a completely different scale to say a war with Russia. The Nations that did send troops were not under direct threat of all out attack. The fighting was quite considerable distance away and the threat to troops although real was perceived to be small. A future conflict with Russia will probably bring in serious intimidation tactics and maskirovka and it would be interesting to see which countries would buckle under the strain… Read more »

I don’t see it as being dismissive but rather realistic. Name me any mature weapon system that Russia has which can match NATO systems (other than the S400). It’s in both Putin and NATO’s interest to ‘big up’ the threat from Russia. NATO wanted to stop their decline and Putin wants everyone to believe that Russia is a superpower again. Russia is not a superpower, its economy is sinking fast and a repeat of the economic woes of the 90’s is on the cards in the not too distant future. It has few friends in the world – calling Iran… Read more »

Russia invades and occupies Latvia, Lithuania and Estonia in 90 hours. They are entirely encircled by Belarus and Kaliningrad. NATO mobilisation takes a week, Russia uses tactical, miniaturised “low-yield”, nuclear weapons (without hesitation) at muster points, wiping out >50% of our European forces and declares that ANY incursion to Kaliningrad, Belarus or the occupied Baltics will result in a full on attack of New York, Washington, Berlin, London and Paris. We have lost the bulk of our rapid reaction forces on mainland Europe; Russia is fully alert and ready for an invasion of Poland; their major cities have been evacuated;… Read more »

I think that gambling that the west won’t react is folly. History has taught us that appeasement doesn’t work with people like Hitler and Putin. Yes i’m Comparing them because if you look at Nazi Germany 33-39 you can see events which are now being repeated by Putin in and around Russia. The recent internet crackdown in Russia etc. Remember that when you see the state burning books soon they’ll be burning bodies! Russia has turned into a dictatorship and it s dictator has convinced the Russian people we are the enemy. Even if tomorrow a new liberal leader emerges… Read more »

as long as we fight OUR WAY and not the way the u.s says we should.

we always look like we’re wearing sandbags tied together with string compared to the yanks. they at least know how to create a well fitting uniform

It isn’t a fashion show. Read vogue, it’s probably more up your street.

It’s a synthetic exercise, to coordinate command and control rather than a mass deployment armour, infantry and artillery.

Mass deployment of a fully worked up brigade or 4 is what we have to achieve. Russia has one tactic for war. Punching in heavier and heavier doses. It knows no other way. Upgrade the C2’s with a 25% increase in road and cross country speed to keep up with every other NATO mbt. The beefing up of the baltic states and our commitment to them must not flag. If Putin smells blood he will move. Weakness Russia will always seek to exploit. Strength is respected. Its embedded in their DNA. Ajax vehicles that do not have the ability to… Read more »

Ajax vehicles need to be equipped with a long range anti tank missile systems as a matter of urgency.

Something not in our inventory since we scrapped Swingfire.

Or here is an idea keep ….Ajax and C2 as they are but get hundreds more Apache Es. For bang for bucks they are outstanding.
Then the Ajax does not need a long range anti tank missile because it’s infantry screen equipped with Javelin or Milan will clear the way and mop up any tanks not smouldering wrecks left behind by Apache.
Just as long as we have air superiority we would always win any conflict. Hence why RAF needs more Typhoons and firm commitment to at least 48 more F35Bs in active service.

Ajax will be deployed forward of the main battle units.

Javelin has a range of 2500 metres, so is limited in its effectiveness. Most modern LRATGW have ranged in excess of 4000 metres.

Apache is great weapon system, but you have to air dominance over the battlefield which cannot be guaranteed on high intensity warfare.

Every major army has a LRATGW except the UK, so everyone else is wrong and we are right? I don’t think so.

Fred B
Reply to  Mike Saul

Canada doesn’t, and they don’t even have a single operational dedicated anti tank or anti air missile system at all. And they are a top 10 spender in defence. Yet somehow they have mouthed their way into commanding a forward deployed battle group right on the doorstep of a Russia. This right away tells you that NATO is not an organization to take seriously. Better the UK and US work together and not make plans to count on anyone else.

Mike As you know, I am a big fan of the Apache, especially at its current price point. I think we should have apache’s in large numbers supporting the Strike brigade even at the cost of tanks (which cant keep up). It’s all horses for courses – but I think your argument on air cover also applies to Heavy Armour, but an apache is just more nimble and can be in the field so much quicker than a tank. If I had a choice between 200 C2 or 200 Apache – It is a no-brainier for me Apache all the… Read more »

NATO would have air dominance over every current threat today including Russia. Their air fields would be wiped out in the opening days of the conflict.

2 of 4
U.K. working as part of an international alliance…
As the National Security Adviser stated, it is unlikely that the U.K. will operate independently at scale.
No need for big divisions etc. We will just plug and play.

And be far more efficient because of it. 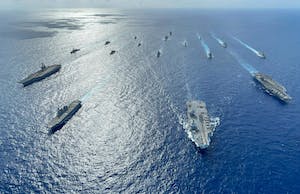