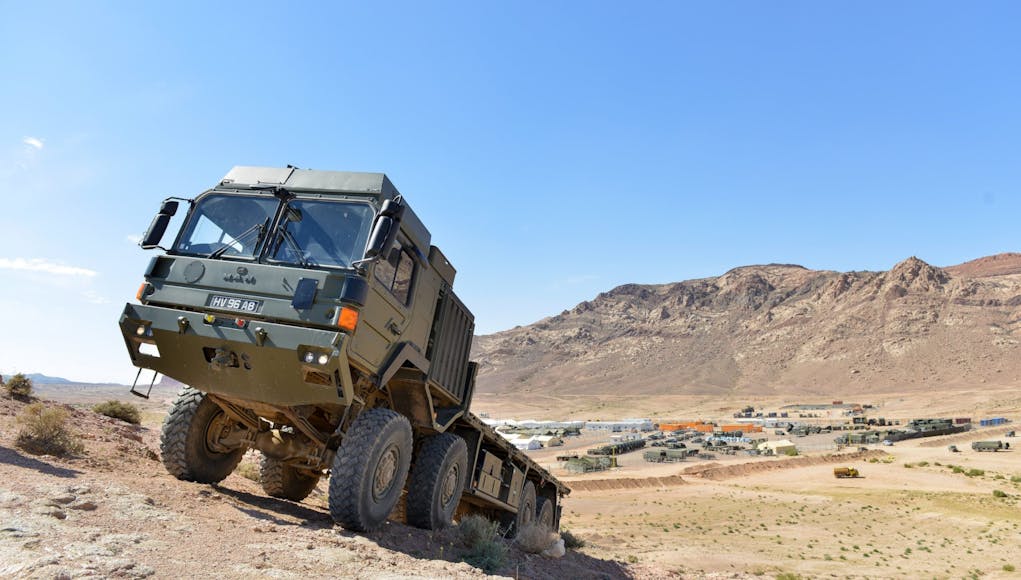 Analysts at Forecast International say that although the Ministry of Defence have signed a number of major tactical and support vehicle contracts over the past decade, the overall rate and level of tactical vehicle procurement across the British armed services have declined since 1990.

“With this shift, British tactical vehicle manufacturers and those across Europe have increasingly shifted focus to the export market as the primary outlet for their military products. The lingering effects of economic austerity measures will continue to restrain the scale of domestic tactical vehicle procurement by the U.K. Ministry of Defence. However, the MoD may make some modest modernization and procurement efforts in the coming years, extending the service life of existing vehicle stocks and bringing vehicles purchased for combat operations in Afghanistan into the Army’s peacetime force structure.”

“In the medium-vehicle market segment, the U.K. Defence Procurement Agency selected MAN ERF UK Ltd to fulfill the British Army’s FSV requirement. The British Army intends to replace its stocks of 4-, 8- and 14-tonne support inventories with the new vehicles from the FSV family. The initial contract called for the procurement of 5,165 new-build vehicles, at a cost of $1.98 billion. In 2006, the DPA exercised an option for a supplementary order of 2,000 vehicles, worth $461.3 million.

The FSV family of vehicles consists of eight variants, in 4×4, 6×6, and 8×8 configurations. According to MAN, over half of the production work on the series occurs domestically in the U.K. However, a significant portion of the chassis production for the series takes place at MAN facilities in Vienna, Austria. The cornerstone of the British light tactical vehicle market remains the renowned and ubiquitous Land Rover. Although Land Rover vehicles have faced operational challenges and criticism over their performance in the IED-laden battlefields of the 21st century, the family currently remains the backbone of the British Army’s light tactical transport inventory, with Supacat contributing a smaller, but increasingly important secondary share.”

I guess a smaller Armed Forces will need less trucks and stuff.

It still crazy the land rover has never been replaced. Totally baffles me, the Jltv contract has also not be signed for 2k vehicles. Not sure if it was down to quality issues or something to do with small windows. But the mod is shocking for delaying these decisions due not having a perfect solution. The price of Jltv is less than half the competition so when budget is a major issue and an updated foxhound doesn’t appear to be in contention why the delay.

The millitary still needs to get about bases and the like, so a light land rover is perfect, we must have over 10,000, and we do have Thousands of mine resistant vehicles to deploy in danger spots around the globe.

The British Army is reportedly trying to acquire 2,747 JLTVs through Foreign Military Sales (FMS) as the US Congressional Research Service report, of 18 Feb 2020

I’m a little surprised the JLR and the British Army never developed more varieties of the Defender. Given its global success I would have thought more heavily armed and armoured varieties and ones equipped with greater under chassis protection would have found a sizeable market globally, especially in war zones like LA.

It’s another case of having a world renowned brand that has not had investment or the confidence to develop cutting edge performance, now fallen well behind and could no longer compete globally. Same story with most of our industries. Other countries seem to have companies that are willing to risk developing families of products that offer a flexible price point and capability for customers with differing budgets. Many seem to make it work. Even though the customer might not be then and there, they know that down the line someone will have a requirement and they have a matured product… Read more »

Land Rover have new discovery’s, and defenders, and range rovers. I would love to see a millitary Range Rover.

Every year as a young man I used to go into British Leyland Show rooms in Piccadilly and ask when they were bringing out the MGD. The rest as they say is history. OK they did eventually to produce the MGF; but too little, too late.
What’s wrong with us?

The land rover wildcat looks great and could have been a great base to start.

Remember the British Army’s vehicles of the 50’s that soldiered on (literally) up to the 80’s and some beyond that! The AEC Militant and it impossible gearbox and copious amount of black smoke, or the Bedford RL built in their thousands and used in post-war,
war films as German trucks that burned in their hundreds…..brilliant stuff.

Never had much time for Forecast International. Gloriously wrong on many occasions.

Personally, I am wondering if upgrading Challenger with such a small number, will survive the aftermath of Covid19

But we need other vehicles to support. So yes the decline in equipment ideally needs to stop.

I suspect the Army will bear the brunt of post covid cuts partly because its easy to cut headcount and its ability to never buy anything in an efficient way.

i miss the old 4 ton bedfords and 8 ton tm,s those were the days..