Qatari Rafale jets have conducted air-to-air refuelling sorties with a British Voyager tanker during a weeklong exercise in Qatar.

“This is the first time the RAF has conducted air-to-air refuelling with the Qatar Emiri Air Force. Exercise GALWAY was an opportunity for the current Operation SHADER Voyager Detachment from 903 Expeditionary Air Wing to conduct Partner Nation Integration on discreet, agile activity.  It further demonstrates the ability of 83 Expeditionary Air Group to operate across the Broader Middle East.

Exercise GALWAY was the latest demonstration that Qatar and the UK share mutual interests in ensuring stability in the Middle East.  Joint operational training seeks to boost Qatar’s ability to tackle the shared security challenges which helps protect the prosperity and security of the UK at home and abroad.”

“It has been a privilege to work with our Qatari allies working up their Rafale capability for air-to-air refuelling.  We have had some fantastic moments this week, with the Rafale pilots integrating and debriefing with our crews understanding how well they’ve done in the air and developing their capability as air-to-air refuelling receivers has been a great opportunity.”

Qatar is fast becoming a large airforce. Lots of pilot training opportunities what with the buying rafale, typhoons and F-15s. Will these be actual Qatari people or foreigners?
Will be interesting to know how there maintenance/operating costs will shape up. They have really went against the flow of consolidating onto one airframe type.
Still massive amounts of gas can give u an over inflated ego lol

Good luck to them.

Its a strategy pursued by some nations to ensure they have operational freedom – don’t invest in weapons from only one power that could pull the plug, spread your dependencies across a number of powers. Qatar has difficult relationships with its Gulf neighbours, and that maybe the reason.

Richard B
Reply to  Monkey spanker

I was in the Gulf States for many years and worked with the local armed forces. Whilst the pilots are generally local citizens, with some exceptions (Oman in particular), most of the maintainers and technicians are expats. The bulk of these would be from Asia, with a small number of Westerners from OEMs etc in the more senior supervisory posts. There are regular efforts to “localize” the workforce (Saudi and Bahrain in particular), and to be fair some good young people (women as well as men) were coming through the system when I left – but just no enough of… Read more »

The pilots are Qatari, being trained in the UK.
Majority of the ground staff for the air force are foreign contractors however.

Yes and it makes no sense. The costs will be enormous. And totally reliant on foreign contractors. Must be difficult to manage and air force with multiple types essentially filling the same role. Interesting they have no Sukhoi products.

It’s interesting that with CSG21 in particular ‘Global Britain’ is thought to be orienting towards the Indo-Pacific but as far as Foreign and Defence policy is developing it’s the G.C.C. that seems to be at least if not more important. Our relations with Bahrain, Oman, U.A.E. and Qatar are strengthening all the time. Saudi is more towards the US at least for now. The only one of the G.C.C. we aren’t close to is Kuwait. At least we haven’t got all our eggs in one basket anymore. Whether we join the T.P.P. or not in Foreign and Defence matters this… Read more »

Interesting thoughts David. I suspect France might find itself butting heads with its European partners as an increasingly isolationist and protectionist EU grapple with France’s independent efforts to play catch up and attempt to excert their international influence, especially since the cancelled Submarine contact with Australia…

French pride has been badly dented there and they feel outmanoeuvred and angry.

As the EU draws ever more power to the centre, Paris will progressively be forced to take a back seat to the EU, at some point it will certainly cause a great deal of tension in the power block.

I think it depends on the relationship between Germany and France. Germany alows France to run Defence and to a certain extent Foreign.policy while it runs economic policy. So long as that remains staus quo I think France will be content. There are two things that could upset the apple cart. Who wins the French Pres election and how succesfull Brexit is. This is part of the reason Macron is so determined to punish UK at every opportunity plus of course his massive ego.

As the wests reliance on oil reduces, as will the interest in the middle East. Unfortunately so will the economies of these states and the stability of the ruling elite. I suspect there will be several civil wars in the region before it’s all over, which will no doubt involve the UK/US deploying again Saying that it’s probably another 20-30 years away and the region could do with the west especially UK/US interfering with their politics.

True but G.C.C. states have enormous financial wealth thanks to oil and that will continue it’s just that oil revenue won’t carry on adding to it. As far as conflict in or between them that is Iran and how succesfull that regime is combatted. On interference I think we need to be humble about our record over last 20 years. Maybe we need to listen as much as we speak when it comes to the regional states.

I would view it in a slightly different way Steve, in reality oil demand will steadily decline, but it will remain an important asset for some fuels, lubricants, plastics etc for the foreseeable future. So let’s say crude oil demand reduces by 50% by 2050, then it will only be the counties with easily extracted oil and world wide transport links that will still be in the business, i.e, the Gulf States. I would expect they will see a fall in demand, but this will lead to a steady increase in crude prices that will offset the financial impact for… Read more »

I think we can include the Gulf in Indo-Pac, it flows directly into the Indian Ocean, and the LRG(S) will be based at Oman, which controls access to the Gulf. It is also the primary source of fossil fuel energy for China. In days of yore, the naval presence in the Gulf was administered as part of the Eastern Fleet out of Singapore, indeed in Imperial days the Gulf protectorates were administered from India, up to 1947. Post war the Gulf became part of Middle East Command for land forces, but there are a lot of miles between the Eastern… Read more »

Yeah could have made myself clearer. I should have said Pacific. I think it’s significant that Duqm and Bahrain will be the only permanent bases we plan for the whole Indo Pacific. That would be as illustrative as if we had chosen Singapore or Brunei.

The wests reliant on fossil fuels will actually never decrease. How much fossil fuel is required to mine lithium for instance. Also the military is completely and utterly totally dependant on fossil fuels for every aspect of it’s operation. The energy required to power a blast furnace to produce steel is like powering a town. So I dont get then impact 10,000 nissan leafs will have.

Across the board demand for oil won’t disapear but for transport beginning with land transport it’s on the way out. That doesn’t mean no oil industry but it does mean a much smaller and declining industry. The Gulf states know this themselves and are moving into new tech as a result. But they are rich and will be rich in the future. 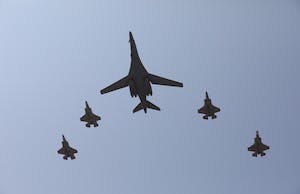