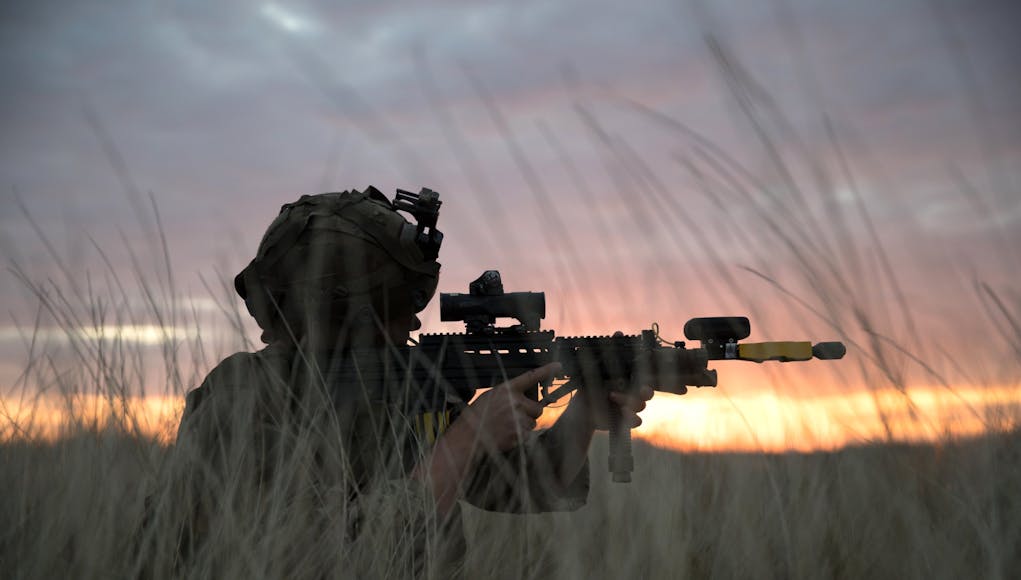 A contingent of British Army personnel, based mainly in Cyprus, have deployed to the northern deserts of Egypt to train with the Egyptian counterparts for four weeks.

This article was submitted to the UK Defence Journal by Robert Clark.

Exercise AHMOSE (named after the Pharaoh and founder of the eighteenth dynasty) will see members of 2 Royal Anglian, ‘The Poachers’, deployed alongside members of both the Royal Gibraltar Regiment and 4 Rifles.

All three battalions bring regional expertise to this training exercise. Currently the Regional Standby Battalion and based at Dhekelia Sovereign Base Area, east Cyprus, ‘The Poachers’ have been exercising around the eastern Mediterranean for two years, and before that fought in Afghanistan in addition to a previous posting in Cyprus.

Permanently stationed at the other end of the Mediterranean perched on the Atlantic and dominating the straits, the Royal Gibraltar Regiment have trained annually in north Africa as part of the British Military Advisory Training Teams in Morocco, forging close ties with the Kingdom since 2000.

Expeditionary in nature as one of the re-orbatted Specialised Infantry Battalions, 4 Rifles are the British Army’s designated north Africa and Middle East specialists, providing additional regional expertise to Exercise AHMOSE.

These three units have been training for this oversees deployment in recent weeks, conducting live firing packages and coaching courses to enable the soldiers to deliver world-class coaching and mentoring to members of the Egyptian military they’ll be working alongside for the next month.

The Egyptian Army has been waging a counter-insurgency in the restive Sinai Peninsula, far from where the British forces will be operating, since 2011 and the Arab Spring, and again from 2013 with the ousting of President Morsi. Egyptian fatalities resulting from the current violence against the Islamic State of Iraq and the Levant – Sinai Province, have been in the thousands, with no immediate end in sight.

With a training package centred around core Infantry skills, including marksmanship, contact drills, medical lessons and counter-IED, it is hoped that over the coming weeks some of these hard-earned British skills will be passed onto their Egyptian counter-parts who are still heavily engaged in the fight against Islamic terrorism.

This is a small piece of good news for Egypt, for UK influence and ideally for the safety of the Coptic Christians in Egypt. Anyone know what the Russians are up to in Egypt these day?

I thought they were in the western sphere of influence but I may well be wrong.

Just curious and googling, the wiki picture for the air force looks mixed.
https://en.m.wikipedia.org/wiki/Egyptian_Air_Force#Aircraft
The army vehicles – lorries and APCs – and artillery look mostly Soviet. And though they have US stuff including the Abrams tank they have ordered the Russian T90 for assembly in Egypt.
The navy has ordered a Fremm and 4 Gowinds but looks to me a sales prospect for T31 and/or an uparmed River 2.
Overall a sales prospect for the UK I would say.

My understanding is that the UK is the largest foreign investor in Egypt. Assuming that this is the case, then good relations between the two countries should be very much in each other’s interest.

Yes, thanks for the pointer. This makes interesting reading.
https://www.gov.uk/government/publications/exporting-to-egypt/doing-business-in-egypt-egypt-trade-and-export-guide

The US has primary influence in Egypt and annually provides between $1.5 to $2 billion in military and economic aid.this is followed by historic Russian influence. Britain doesn’t have much influence and less so since we banned our tourists from Sharm after ISIS took down the Russian civilian airliner out of Sharm. That cost the Egyptian economy.

The Egyptians still have a lot of Soviet era equipment from when they were allied to them before the 1979 peace deal with the US and Israel. Newer equipment tends to be Western like T-90 tanks and Mirage Rafale fighters.