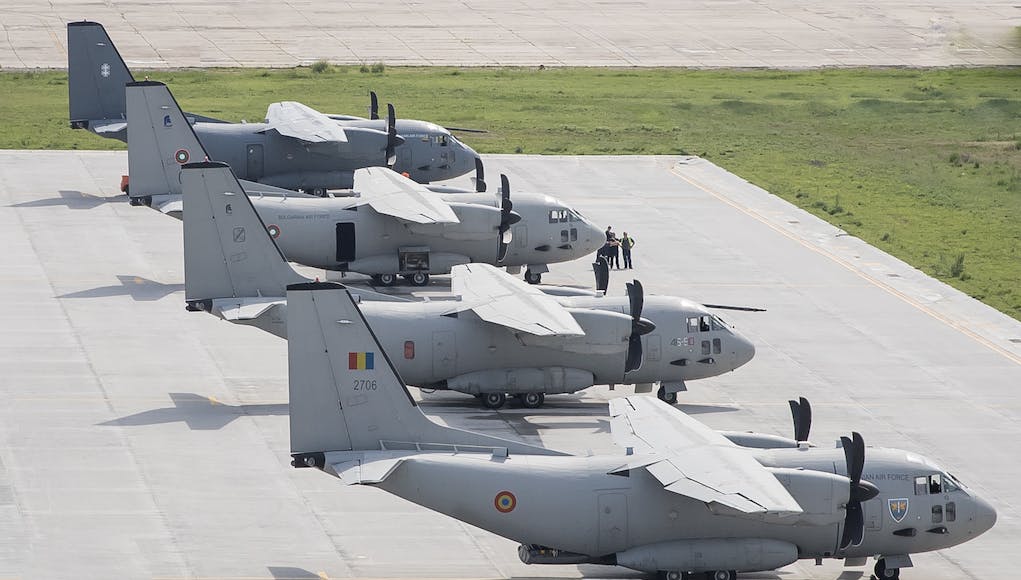 Share
Facebook
Twitter
Pinterest
WhatsApp
Email
The European Spartan exercise took place at Otopeni Air Base, Romania from 13th to the 24th of May 2019.
Air crews from NATO Allies Bulgaria, Italy, Lithuania, Romania and Slovakia conducted air drills with their C-27J Spartan transport aircraft at the Romania Air Base to increase interoperability among European countries flying this military aircraft. Observers from C-27J users Greece, United States and Australia also attended. The deepened cooperation and capabilities in this field will also benefit NATO air operations.
Prepared by the European Defence Agency and hosted by the Romanian Air Force the exercise aims at promoting aircraft user type approaches to harmonise tactics, techniques and procedures as well as to develop more cost-effective solutions to operate and sustain the C27J.
According to the Agency:
“Academic and flying training was offered to air crews while ground crews were engaged in developing synchronised and coordinated procedures which will eventually allow them to perform cross-maintenance on each other’s aircraft.
During flying training the participating Spartans conducted landing on soil and short-distance tracks, parachuting personnel and materiel, cooperation with combat aircraft, coordination with land forces and medical evacuation.
The European Defence Agency’s goal is to increase the provision of airlift, develop concrete solutions to boost the efficiency of existing and future fleets and to optimise the use of air transport organisations and structures.”
The C-27J Spartan aircraft is designed to perform tactical missions in peacekeeping and humanitarian operations, providing direct air transport, day and night.

I watched a Spartan do an impromptu air display, when we were in Poland. The Italian crew didn’t hold anything back doing barrel rolls and loops, something I never expected from such an aircraft. Awesome to watch though.

USAF use some for Special Ops I believe?

There is a ‘Praetorian’ MC-27J gunship prototype that has completed testing at Eglin AFB in Florida.

The Preatorian utilises a roll-on / roll-off palletised gun and mission control package for gunship missions, and retains an integral L-3 Wescam MX-15Di EO/IR turret in a permanent mounting under the nose, so it can perform gunship, ISR, and search & rescue missions, as well as conventional tactical transport missions (with the pallet removed).

Thank you. Was wondering why this is something MoD never looked at for UKSF.

The idea of a flexible gun pallet is worth investigating for the Hercules on the back of the Praetorian ‘proof of concept’.
Something the MoD could keep an ‘eagle eye on’ is the RAAF repurposing their Northrop Grumman AN/AAQ-28 Litening AT targeting and EO/IR pods to integrate them with its fleet of 12 C-130J Hercules airlifters. They have about 40 such pods becoming surplus as they are released from their F/A-18A Hornets as they are progressively stood-down. It wouldn’t take much to link a mounted targeting pod with a similar palletised gun package (or 2) in a Hercules.

Super aeroplane. But oddly a niche too far even for the US. They have been a bargain for the countries that picked them up.