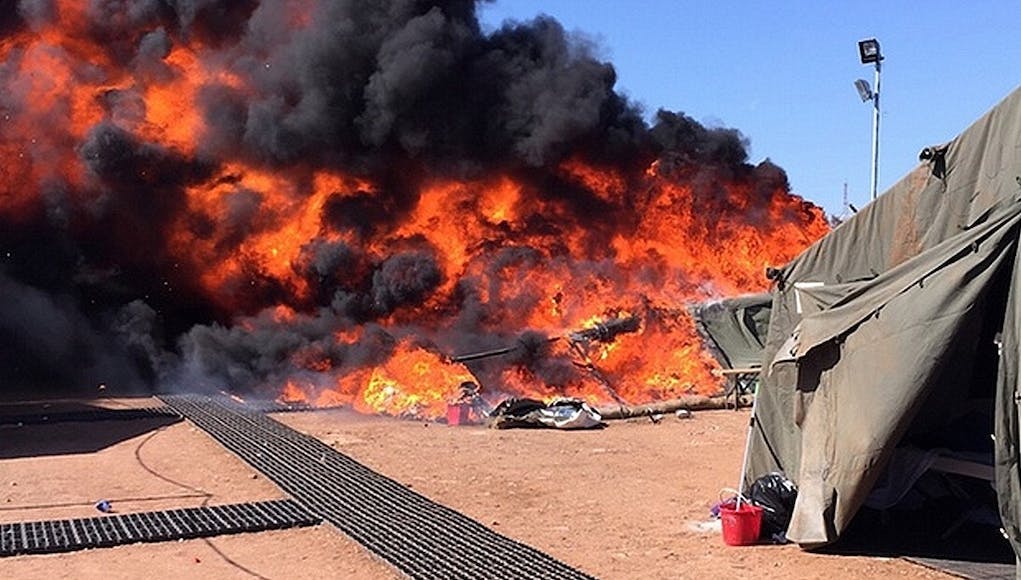 Groups of migrants who want to leave RAF facilities are seen protesting in apparent anger at the conditions there.

A total of 11 migrants, most of them from Syria, landed on the island last month at the nearby RAF Akrotiri, including 28 children.

One man is seen in the footage obtained by The Guardian, shouting “we are people, not animals!” while another is captured seemingly threatening to hang himself.

Pictures passed to the newspaper show a number of tents at the base on fire.

14 of the 114 migrants being held in a transit facility in Cyprus have now been moved into accommodation in Cyprus. Read the latest statement below.

“We can confirm that 14 migrants have been moved to accommodation in the Republic of Cyprus today. The move was conducted with the assistance of the Cypriot Authorities, who will now support these migrants on behalf of the Sovereign Base Area Administration. Those who have been moved include a number who have claimed asylum, as well as those deemed to be vulnerable. We will continue to work with the Republic of Cyprus to provide support and accommodation to those who are yet to claim asylum. Their options for either claiming asylum or being repatriated are being discussed with them and they all have access to advice from the UNHRC regarding these options.”

It was the first time that refugees have landed directly on what is considered British sovereign soil. little is currently known about their journey to the base or their country of origin.

RAF Akrotiri is used to launch British air strikes against Islamic State fighters in Iraq. Akrotiri has also played a crucial role during Britain’s other recent operations in the Middle East. During both major campaigns against Iraq in 1991 and 2003 and also during the no-fly zone operations between, it operated as a staging post for British forces en route to the region.

Due to the station’s relative proximity to the Middle East, it is often used by British allies when needed, such as for casualty reception for Americans after the 1983 Beirut barracks bombing and as a staging post before heading into theatres of combat in the Middle East/Persian Gulf theatres.

Akrotiri is also the winter training grounds of the RAF display team, the Red Arrows.

A Sky News source on the island said the vessels were apparently able to reach the shoreline unchallenged .

“As we reflect on the landing of these refugees, we must also reflect on how the UK has allowed three to four boats, with up to 180 people, to land undetected and unchallenged within the perimeter of it primary military base from which it launches operations in Syria? What if the landing had been of a smaller scale and by members of IS, seeking to attack?”

There has been extensive coverage this morning of a number of boats containing migrants landing on the shore of RAF Akrotiri in Cyprus.

“We can confirm that a number of boats with migrants on board have landed on the shore of RAF Akrotiri in Cyprus. At the moment our key priority is ensuring everybody on board is safe and well and when we can release further details we will.

We have had an agreement in place with the Republic of Cyprus since 2003 to ensure that the Cypriot authorities take responsibility in circumstances like this.

Events like this underline why it is important for us to develop a comprehensive approach to the migration crisis working with our international partners to provide humanitarian assistance in Syria and neighbouring countries; to disrupt the trafficking gangs and to address the root causes of instability that cause people to seek a new life elsewhere.”

The MoD says Cypriot authorities will take responsibility for the migrants on the vessels that landed at RAF Akrotiri.

Religion of peace ehhhh. Simple stick them in a plane or boat and send them back, these people don’t want our help or generosity they are here for a nice house and free money and health care, and then try impose their way of life into us

Not sure what this has to do with religion, you realise the majority were Christian, right?

You do realise it’s all to do with religion right, if they are indeed Christian why do you think they are here, the whole thing in Syria is all about religion!

However, the Islamophobes ignore anything that doesn’t back up their pre-conceived views.

Let them burn they bring it on them self what ever the religion is, if they don’t won’t our help then fuck off and give it to some who needs it

They should just kick them out of the base, why these people refuse to claim asylum in Cyprus is a joke they claim to be escaping war etc for a safe place to live so why not Cyprus its safe but no these people like many others are not refugees there economic migrants and they are just after money not safety.

Would be a rather silly idea.

So UK Defence Journal. As we who have served and are serving to protect the UKs way of life know what we will do, what will you suggest is the best way to solve this problem?

These damned migrants are pushing their luck too far. Not content with being looked after at considerable expense and inconvenience they now think they have the right to make demands.

Our way or the highway!

Arrest them under the terrorism act

Not good at all

Doesn’t exactly encourage us to welcome them here does it? If they riot at the first rule of law that they disapprove of what are they going to do in Britain? Throw a petrol bomb if they get a parking ticket?Sorry but anyone involved in violence is not welcome and should be turned round and sent home.

I am guessing that the filthy comments like shooting them are coming from people who have never worn a uniform or picked up a gun in the service of their country.
SOLDIERS don’t do shit like that, at least they don’t do it if they represent this country.

Sleepers sent by over seas power things to come, needs sorting out quick before we are under the jackboot

Give them some of the hospitality that they get in there own countries then see how many still want to come here!!

Force them back into the sea at bayonet point.

Tom I have a very strong suspicion that your real name in real life is Walt.

Hahaha. Nope. That really is my real name, Karl. Ttfn.

Were they not keen on the scoff in the cookhouse?

that attitude brought them out from their country. there’s no time and space to seggreggate them

Ship em back to their own fucking country if they are causing chaos like that in cyprus what will they be like in europe?

Cyprus is in Europe.

Some very fine examples of unintelligent knuckle draggers attracted to this post. 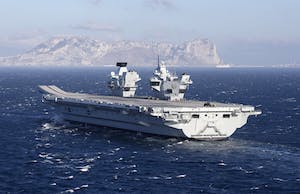