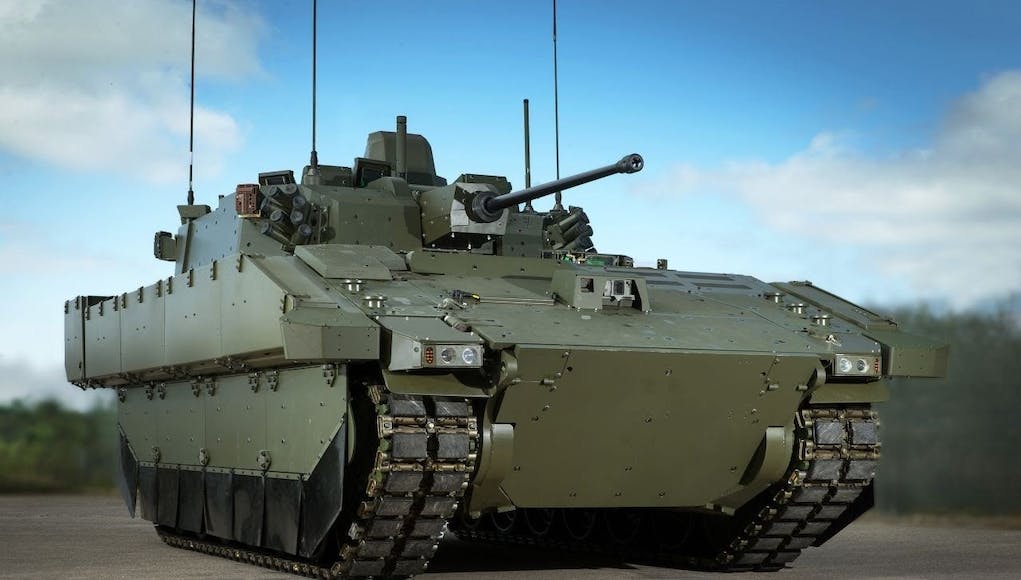 The Defence Secretary has announced a £3.7 million contract for the Army’s next generation armoured vehicle with a new automated threat warning system.

Thales UK has signed a contract with General Dynamics Land Systems–UK for the installation of its Acusonic sensor, a vehicle-mounted acoustic shot detection system, on the £4.5 billion Ajax family of armoured fighting vehicles.

The Ajax Shot Detection System will be manufactured at Thales in Templecombe in Somerset, which employs more than 700 people in highly-skilled manufacturing and technical roles.

An MoD release on the matter said:

“Designed to accurately sense and report the direction of incoming enemy fire, the system will give the vehicle’s crew the critical situational awareness to react to the threat. Its innovative sensing system is based on Thales’s world-class sonar technology that provides the ‘ears’ for ships and submarines around the world.

Each Ajax will be fitted with three Acusonic sensors, giving the crew a 360-degree threat-detection capability.”

“I am pleased to announce today that we will be spending almost £4million with Thales and General Dynamics Land Systems-UK to deliver the Ajax Shot Detection System, which can sense enemy gunfire and protect troops using our next generation armoured vehicles.”

Under the terms of the contract, 735 Acusonic systems are now on order for integration onto Ajax. Thales is already on contract to supply the primary and secondary sighting systems on the vehicle.

The six variants in the Ajax programme – Athena, Ajax, Ares, Apollo, Atlas and Argus – are due to come into service in 2020, providing a full suite of medium armoured vehicles and capabilities.

“Ajax will deliver a step-change in versatility, agility and protection for our soldiers. Integrating this new sensor on to our family of Ajax vehicles, which will provide critical situational awareness, is another innovation we are investing in to ensure that British soldiers have the very best equipment to maintain their competitive advantage on the battlefields of today and the future.”

General Dynamics Land Systems–UK, as the prime contractor for Ajax, was awarded the contract to provide the Ajax family of armoured vehicles in 2014.

all the other shot detection kit we’ve had before. none of it worked, it was crap.

Most of that list are things that do work,though…
40mm grenade launchers work very well for example.
No offence but you sound a bit over the top with your negativity. Or just very ill-nformed

I suspect he’s Brirish negativity seems to be in the genes sadly.

Not much info about it around after a cursory search online.

The system that is really required for the light, medium and heavy armour is an Active Protection System (APS) such as IMIs Iron Fist (faster and with more reloads than Trophy). Having a shot detection system is useful but not essential. The Iron Fist not only deflects/destroys the incoming threat but also shows where it came from as a bonus it can be networked to other vehicles/aircraft etc. The system uses an X-band radar which is not massively affected by the weather, so could be used for area search as well as self-protection. Just need somebody high up in the… Read more »

That sounds amazing. So amazing and to my mind so obviously imperative what is the cost of such a system compared to the shot sensor?

And why MoD does not jump on it?

It emits radiation, the acoustic sensor is passive

Acousticfetection devices have been around since 80s, what is didn’t is an active protection system that intercepts incoming munitions.

I would consider this a very high priority, but it seems the MOD doesn’t agree.

So lets throw this system away because it isn’t an APS. Jeesh.

Surely knowing you are going to be hit is a little pointless if there is nothing you can actually do about it.

So 735 acoustic systems ordered but each vehicles requires 3 sensors. Well we are not buying 735 Ajax only 589 but the numbers are perfect if it’s 245 x 3 = 735 which translates as only the turreted Ajax will receive the system and the other variants, all 344 of them will not. Unless of course we are indeed buying 735 sets of 3 sensors which I just can’t see as it would leave 146 systems unused. Can’t see us getting an active protection system for anything if we can’t even manage detection sensors on the whole Ajax fleet.

GD images only show Ajax with the system. Not the other versions.

Them in the MOD do not go anywhere near an APC so what do they care.!!

Can any one tell me why our military bought the ajax? , it looks cheap , is it actully any good?

Good? Yes, but not the best or most cutting edge. Cheap enough to acquire in meaningful numbers.
Probably would have been smarter to buy CV90s from BAE on the provision of domestic production. The higher cost would have been more than been defrayed by the taxes taken in.
As for why they picked Ajax (ASCOD)? Cheaper in the short term but not in the long. While still being a good offering.

‘Short term gain, Long term pain’ is the unofficial motto of the MOD.

How BAE managed to loose this competition I will never know. I read somewhere they planned to build most of it in Sweden until they realised they where going to loose the competition which they thought they had it in the bag, so I don’t have much sympathy for them.
It was a big knock to the CV90’s reputation it may even hinder future exports when customers see the British turn it down, completely moronic really.

The reason has to be that manufacture in an existing Swedish plant is more profitable. Accountants rule ok, not common sense.

A good purchase but what British armoured vehchle need is a trophy system. Every major armed forces on the planet is moving to grt one but the UK like always will wait until troops have died to acquire it. A trophy system would negate this purchase entirely and kill two birds with one stone as detecting where the attack came from is part of its operation.

Lewis, Trophy is the older system, Iron Fist is the newer, although the Trophy is battle proven! Iron Fist fires a non fragmentary explosive charge at the incoming threat rather than the Iron Fist’s tungsten shot. The idea being the concussive wave destroys or deflects the missile/rpg. If you can have a quick look on YouTube (only shows the two shot version). It has been shown that not only can it defeat side attacks from RPGs and ATGMs but also top attacks. In one demonstration it has been shown to deflect an APFDS dart away over the tank!

Fascinating. Thank you for this.

I am a scimitar commander .. we have always been of the view that if we are getting shot at we are not doing the job properly !! Recon isn’t about fighting that’s why we have the warrior … I would be more concerned with adding a stabilized platform to the turrets if you want to start thinking of being shot then having to stop to fire effectively is always going to fall in the enemies advantage…