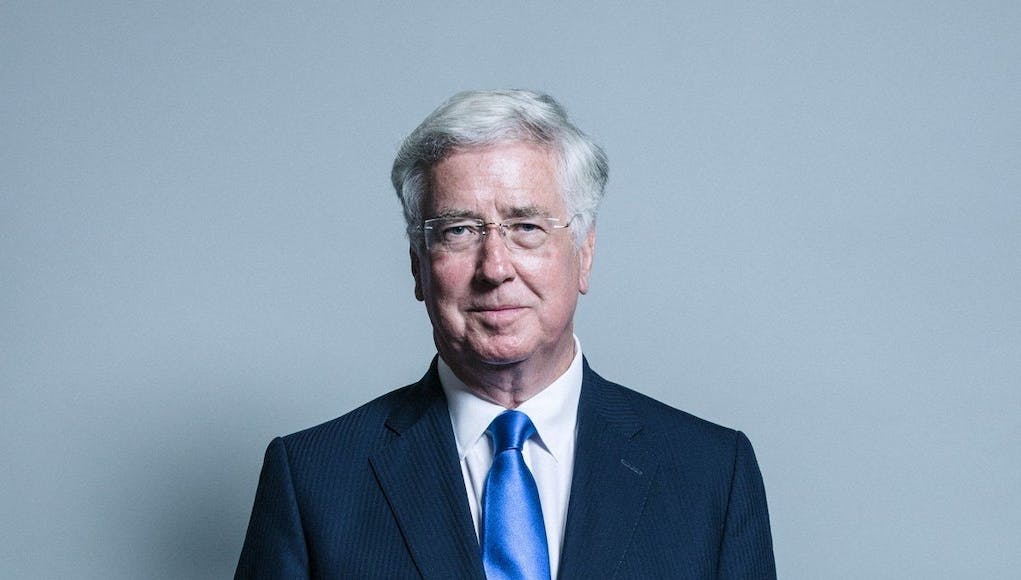 Fallon has left the government’s front bench, saying that his “behaviour in the past may have fallen short.”

Earlier in the month the Minister made front page news when it was revealed he had inappropriately touched journalist Julia Hartley-Brewer’s knee during a dinner in 2002.

Hartley-Brewer recalled that, after Fallon kept putting his hand on her knee, she “calmly and politely explained to him that, if he did it again, I would punch him in the face”.

Shortly after, on the 1st of November 2017, Fallon resigned due to “allegations…about my previous conduct”.

In his resignation letter to May, Fallon said:

“A number of allegations have surfaced about MPs in recent days, including some about my previous conduct.

Many of these have been false but I accept in the past I have fallen below the high standards that we require of the armed forces that I have the honour to represent.

I have reflected on my position and I am now resigning as defence secretary.”

In her reply, the prime minister said:

“I appreciate the characteristically serious manner in which you have considered your position, and the particular example you wish to set to servicemen and women and others.”

He is an idiot but i think Boris would actually fight hard for the military which would be a change for the better.

Yes his ego alone wouldn’t let him lose out on funding.

Penny Mordant MP for Portsmouth north, former junior minister in the MOD, RN reservist and father was an ex para is my choice.

Fallon was past his sell by date as a safe pair of hands and no doubt more revelations of his behaviour are to come, but don’t expect miracles from a new minister the straight jacket of defence budget leaves little room for manoeuvre.

Don’t know much about the lady mentioned but what you say otherwise is right on the button. Nobody should get carried away. It may even be a case of better the devil you “knew”….maybe.

Or failing that what about Hartley Brewer, I like her “punch in the face” attitude.

Even in imagination, not a bad choice. Hartley Brewer would take no prisoners and has a sharp mind. She would be immediately undermined by the civil servants who mismanage everything to their own satisfaction. The Defence Secretary is usually just a push over for Whitehall. The last one I admired and respected was Roy Mason.

I met Roy Mason once in NI 76 or 77, he wanted to accompany a foot patrol around the New Lodge Belfast. Which was quite brave of him given the PIRA presence in the area.

After some discussion this was permitted, however we flooded the area with troops and police. The locals were very worried to see so many security forces they thought we were going to evict the lot of them and send them to the Republic.

If it is Penny it would be a further kick in the teeth for the amphibious fleet and th RM – all of which are based in Plymouth, not Portsmouth.
Would be difficult for her as a local MP to protect the Plymouth “fleet” at the expense of Portsmouth.

If you want a balance I give you Johnny Mercer, Plymouth MP. Retired 2008 as Captain, attached to 29 Commando Royal Artillery, three tours of Afghanistan and more and currently a strong and active campaigner for veterans rights. Good bloke.

You know whoever it is they are going to be a lying, two faced, incompetent politician who has zero knowledge of defence. Too many of our political class have zero life experience and have ever served the country in public service, before going into politics that is. We need politicians like Paddy Ashdown (ex SAS) who will at least have some awareness of military matters- I am not aware of any Tory MP of this calibre or experience. The country’s defence is in a mess- canabilising active RN ships and subs to keep others going due to a lack of… Read more »

MR Bell,
While you were writing your tirade I put the name of my MP up who definitely has experience. If your so jaundiced as to condemn people you don’t know before their names are even mentioned why bother to subject the rest of us to a constant, repetitive blog. It really is becoming boring.

Mr Bell An interesting tirade as usual but sadly, as usual, full of errors. And your anti-Brexit standpoint shows through if you recommend that EU Luvvie Ashdown (who isn’t actually an MP but never mind) and your “stupendously massive Brexit bill to pay” comment. However your biggest mistake was your “incompetent politician who has zero knowledge of defence” comment. Really? Try these Tories for a start. And just to rub salt into your Brexit wound the guy leading that negotiation is himself ex SAS (David Davies) (As of pre the last election) Sir Gerald Howarth Royal Air Force Volunteer Reserve… Read more »

The use of RHA for some RA units is purely for symbolic purposes.

Mike – Glad someone actually read it all and thanks for the accuracy …. what struck me was the very strong Service backgrounds of Conservative MPs rather than Labour or LibDem. And I make no political point here.

That’s ok Chris, thanks for posting the list. I never knew so many had served in the UK forces.

Being an ex gunner myself I am aware of such trivia regards RHA and RA.

My own experience it that most service personnel see the Tories as their natural political home. That’s just the way it is.

I for one am not overly happy about this. I am not condoning inappropriate behaviour and if it turns out that there are more instances then it is correct for him to go. If there aren’t then I am at a bit of a loss why he is going. The lady concerned certainly didn’t want him to resign over it.

He may have said “growing navy” and £178bn defence budget” a few too many times but I genuinely believe he was trying to secure more resources for defence.

The spreadsheet suggests it was far from a single ancient knee touching incident and his resignation speech says as much.

Although I suggest it was the moralising hypocrisy of last weeks RN submariner bashing which was designed to shut down their public lobbying which really did for him.

Its a shame really – for all the moaning people do on here he wasn’t the disaster that many think he was. I had real hopes that we could get more resources for defence and it was good to hear him say that was his aim. From what I am reading now no one appears to be suggesting that he was some sort of predator, but clearly his behaviour was unacceptable.

Rob. Fallon had to go. One cannot have officers and ranks going before Courts Martial for this sort of misconduct that the ‘man at the top’ admits to. He had to go.

From Fallon to felon in one foul swoop! Just what the MOD needs right now, and the crows will be circling to take rich pickings for their own departments. Should the security of our country be so badly managed?

The crows are circling on this site as well!

Tobias Ellwood, seems to be another name in the frame. Ex RGJ officer and assisted in the aftermath of the terrorist attack in March this year rather than running away to seek a safe haven.

Another good contender, but remember this is politics which is not a meritocracy.

Gavin Williamson it is, no doubt a safe pair of hands but no experience of the military

Never heard of him – just read his wiki page and there isn’t much there. I would assume this is more to do with shoring up TM’s government than it is the best person for the job.

Still, lets give him a chance before slating him.

First issue for Williamson to investigate, why do the wheels keep falling off army land rovers?

Because they are older than him in some cases? Slight exaggeration but not much.

I was disappointed when Hammond left. At least he can manage money.

As opposed to being unable to manage his hands when in the company of young females.

Too convenient for me. Hartley- Brewer has said she doesn’t see these allegations as a resigning matter. Am comcerned the real reason for the resignation is that Fallon has given up in the fight against defence cuts.

Or maybe several more accusations of inappropriate behaviour on his part.

I bet most of Westminster is quaking in its boots about possible revelations or cover ups, this story has a long way to run before we end up with the truth.

Very possible. That said on the whole I would say Fallon was one of the good guys. Westminster is a hot house, MP’s are away from home in the week. This looks like nice guy has mid life crisis and trips up, not a Cyril Smith incarnation of evil. A change of press culture away from sleeze towards a bit more good news would not go amiss. I wrote to the BBC to point out that they seemed to have missed the fact on their web site that Lewis Hamilton has won the F1 world championship for the 4th time-… Read more »

Come on guys Ministers of State are picked around the power dynamics within the top of the political party in power. Their knowledge, understanding or background in a field is of apsolutly no bearing whatsoever, it’s who the PM needs in one of the top stops to keep a particular group of MPs happy/reward one of her supports. It’s just how it is.

Resign or be fired? I’m fed up with you suggesting defence needs more money. These thing happen .