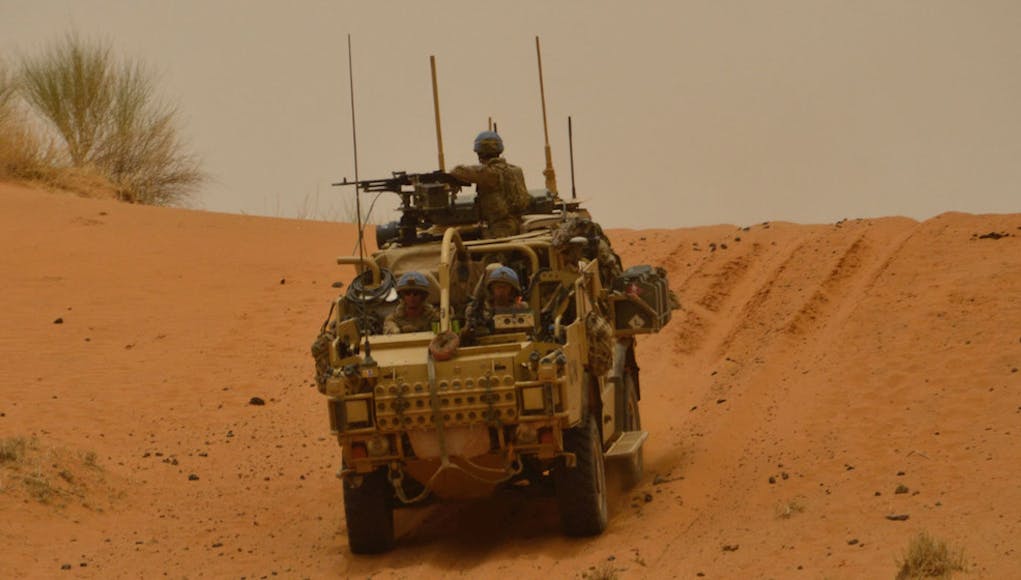 The British contingent to the United Nations mission in Mali (MINUSMA) have been operational now for eight months.

In that time, the 250-strong Task Group have been busy disrupting insurgent activity across the open eastern Malian plains, whilst reassuring the local population, and crucially enabling humanitarian relief and assistance to an area ravaged by violent Islamic State-inspired terrorism since before 2015.

This article was written by Robert Clark and Will Meddings.

Robert Clark is a Defence Policy Associate at the Henry Jackson Society. Prior to this he served in the British Army for 13 years, including tours of Iraq and Afghanistan. Will Meddings is the Commanding Officer of the Long Range Reconnaissance group. A British Army officer in the Royal Anglian Regiment, he has experience of operations in Iraq, Afghanistan and across Africa.

The British soldiers, drawn from 2nd Battalion the Royal Anglian Regiment and the Queen’s Dragoon Guards, form the Long Range Reconnaissance Group (LRRG), pushing out well beyond the areas where other UN troops can patrol. Here, the British conduct intelligence gathering operations and local population reassurance patrols, deep inside what has up until now been enemy controlled territory.

As part of enabling the humanitarian assistance to the region, the Task Group have recently been involved in facilitating a special UN Human Rights team, investigating suspected war crimes.

On 8 August, between 50-100 Islamic State in the Greater Sahel (ISGS) fighters rode into four villages around Outtagouna, close to the Niger and Burkina Faso borders in the south east of the country. Here, the Islamist fighters cordoned off the villages, and began ruthlessly murdering any males over the age of 15. In all, 57 were reported killed, and a dozen more wounded.

As reports of the killings came through, the British launched Operation MAKARA 2. Fortunately, the Task Group were due to patrol the same area, located approximately 150km south of their base in Gao. Launching a day earlier than planned, the 250 British soldiers accelerated the deployment of their specially designed off-road desert vehicles and arrived less than 36 hours after the attacks.

The LRRG stayed on-site for three weeks; they are the only nation who stay out on the ground for longer than a week. During this time, the troops were involved in carefully collecting eye-witness accounts from the local population and physical evidence left by the attackers, as well as providing security. In addition, they hosted an eight person UN Human Rights investigation team, who flew out several days later to conducted crime scene investigation and interview local Malians.

Due to their rapid advance to the area and their presence in the affected villages for several weeks, they were able to provide critical information to support the UN investigation. Its final report will be presented to the UN Security Council and help bring the perpetrators to justice. Furthermore, due to the continued security they provided, they also hosted a field mission from the Civilian Affairs Division, allowing MINUSMA’s community liaison officers to access villages in the area not visited for several years.

Following the return of the investigation team, the Task Group continued patrolling the area at night, deterring any further ISGS activity. Demonstrating the range of capabilities for which the British were originally requested by the UN commander in Mali, the LRRG used their unarmed Intelligence, Surveillance, and Reconnaissance (ISR) drones, conducting missions over the towns to identify and prevent further violence.

This light footprint approach, of a British Task Group numbering only 250 personnel, is a perfect demonstration of the tactical, operational, and even strategic level effects which the modern British Army can achieve. Deploying into a contested security environment, a small but professional force can deliver a broad range of highly effective operational missions.

Operation MAKARA 2 has highlighted the determination, versatility and wide range of capabilities the British Army have deployed to southern Mali. It has also demonstrated that a conventionally-deployed Task Group can provide the security needed for indigenous troops to counter insurgents, whilst securing the local population, and ultimately bringing to justice to those who seek to threaten innocent civilians.

How about hunting down and killing the savages responsible ? Or is that considered a “politically incorrect” concept for a modern army to do ?

Give it a few weeks, the wonks will be demanding we bring all the ‘hero’ interpreters to the Uk whom it appears the British employ on the basis of 20 locals to each Brit.

Read this the other day UK FORCES stopped using local interpreters in 2014, so they have had 7 years to leave the country. yet only tried to leave in the last 2 months, what skills will they bring to this country apart from telling there 16 kids and 57 family members how to complete there claim forms.

From what I can see its nothing more than a huge con job. First it was interpreters then they started adding folks: Teachers Doctors Students LGBT Politicians Charity workers Aid workers Sportsmen and women TV presenters Cats and Dogs Extended family Currently the UK is been taken to court for not taking in judges Then there how so many so called asylum seekers living in the UK just happened to go on holiday to the very country they sought asylum from.  The likes of the BBC are knocking out stories by the bucket load how these people feel betrayed. There… Read more »

No air over required and we have pumas and Chinooks over there for rapid reaction force and evac if necessary.

Ah right, I just have visions of an ambush type situation like what happened to the yanks and got almost all of them killed in the area.

Chinooks are part of the French OP Barkhane and it depends if their busy or not at the time. First I’ve heard of Pumas being over there or are you talking about the French Caracal helicopters?

No pumas I knew we had Chinooks over they supporting the French the helos I saw on the news buliten over there are probably the Spanish ch90s or French Caracals. The helos were kicking up dust landing and it was about our lads over there just assumed they were ours.

This is good work. But prevention is better than cure. Is it possible to implement early warning and rapid reaction to these awful atrocities?

It is all about reducing the ability of the Islamic groups freedom of movement. To do that you have to lock down an area, which means you need lots of eyes in the sky but just as importantly boots on the ground. Mali is a bloomin huge country, where its geography ranges from Sahara desert, savannah, to tropical forest along with a mountainous region in the East. Realistically to properly lock down this country you will need thousands of troops. Which at the present time no Country’s political masters are willing to do. So we are paying lip service to… Read more »

I appreciate the geography is a challenge. No chance of forming local militias and a signalling system I suppose?

There is a USAF facility in Niger, to the east. Used for drones according to Wiki. So in theory could use RPAS, maybe our older Reapers, from there, for persistent coverage. But the area is so big and the troops on the ground far too small. Rather than reaction to attacks how about using Intelligence to find the ISGS camps and exterminate them by direct action. In the troubles in N Ireland intelligence had worked out who most of the terrorists were, but politics and ROE prevented them being visited in the night and dealt with. Save another Afghanistan and… Read more »

Why on earth are we there ? Why should we care what’s going on in the French informal empire ? Terrorism ? Name one attack in UK carried out by Francophone African Islamists ? We have more important things to do than this.

Please before getting on your soapbox, do a little bit of background checking. As part of an agreement in 2016 where French Atlantiques would provide maritime patrol coverage for our CASD, in return we would provide helicopter heavy lift support for their troops as part of Operation Barkhane along with a monthly strategic airlift using our C17/A400Ms. There where to be no UK ground troops, as this was a purely support operation. Operation Barkhane is a French led mission in support of the Malian Government which also involves 4 other surrounding African countries. Their mission is to try and stop… Read more »

There are Islamist groups operating in Indonesia and the Phillipines threatening the crucial straits of Malacca. Mozambique threatening the vital Cape route if the Suez Canal is closed. With al Shabab and the Houthis plus the war between Ethiopia and Tigray threatening a pincer attack from the Red Sea end of the Canal. Growing Islamist influence in Tunisia directly threatening the central Med trade again threatening this time the Northern route to the Canal. All these existential threats must be confronted with all our forces or our very existence is at stake.
Come on cheer up.
﻿

Ok a couple of questions spring to mind. Out of all the places in the world that are going to hell in a handcart why is our largest combat deployment in the world in Mali ? Our national interest there is ?

Personally id rather leave the French to it after they have thrown the toys out the pram, pull all UK assets from the place and leave them to go cap in hand to mother Merkel to ask for help.

Yep even before the latest French tantrum.

Especially as they have cancelled defence ties or whatever it was they decided to in the last 36 hours with the UK. We arent bound to them at the minute so crack on lads, we shall DHL a bag of white flags down for them just incase.

If you don’t want a wave of hard line Islam to flow all the way north to south resulting in the whole Africa becoming a ‘stan’ you have to draw a line somewhere: Mali is the front line. We are posting an OPV to the Guinea. As Daniele posts above, the USAF are in Niger. The Islamic fanatics are very active in Nigeria. We will station a Ranger battalion in Kenya which is next door to Somalia and a neighbour of South Sudan which is mostly Christian and split itself off from Sudan which is 99% Islamic. North of an… Read more »

So we’re there to help the locals convert ?
PS There’s no bloody edit button for me to delete my top comment. I thought it hadn’t come through so tried again. Sorry everyone.

Short term no, we are there to hold the line, run down terrorists ( whose actions inspire UK head cases) and protect innocent women and children from being kidnapped and abused. Medium term we hopefully bring stability and help with building schools, hospitals, train local forces etc. They get to know us, they see our troops combine resilience with kindness; we build a relationship of trust. At some point they wonder how these ‘men of the west’ came to be, since their local young men often turn into maniacs. At some point they twig that this flexibility of mind is… Read more »

Your an optimist if your right this will be a happier world. I’m a pessimist so hope your right and i’m wrong. To be honest with my prediction success rate your odds are a lot better than mine !

The problems in Mali are entirely due to a religion. So are the solutions.