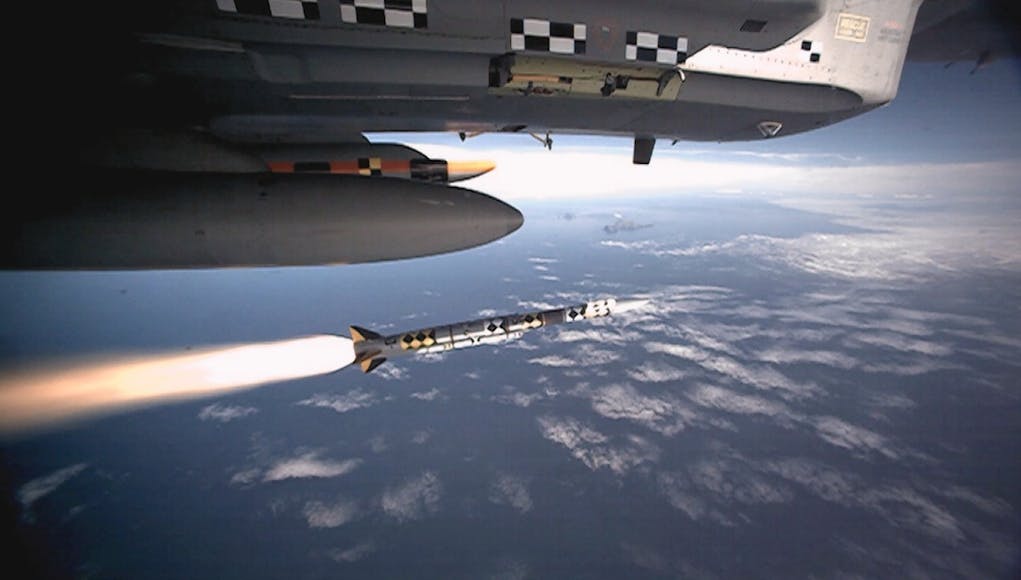 Japan and the UK are moving forward with efforts to develop a new joint air-to-air missile.

The project is understood to be supported by a successfully conducted project to integrate Japanese seeker technologies into MBDA’s Meteor Beyond Visual Range Air-to-Air Missile, IHS Jane’s has reported.

The project utilises Japanese technologies to enhance the accuracy and performance of the missile.

Meteor is an active radar guided beyond-visual-range air-to-air missile being developed by MBDA. Meteor will offer a multi-shot capability against long range manoeuvring targets in a heavy electronic countermeasures environment with range in excess of 100km.

MBDA is planning integration of Meteor on the Lockheed Martin F-35 Block 4. The Meteor has already been checked for fit in the internal weapons bays of the JSF. It is compatible with the aircraft’s internal air-to-ground stations, but would require modification of the fin span and air intakes to be compatible with the air-to-air stations.

It is understood that it is in this context, MBDA has agreed to jointly research a new seeker with Japan.

“Japan is our closest security partner in Asia and I want to significantly deepen defence cooperation between our two nations.

We will do that through joint exercises, reciprocal access to our military bases, military personnel exchanges and cooperation on equipment, including a new air-to-air missile.”

Following the success of the first round of talks on the Co-operative Research Project on the Feasibility of a Joint New Air-to-Air Missile (JNAAM), the Ministers have confirmed discussions would move to the second stage.

Further additional cooperation could, according to a MoD press release, include mine hunting in the Gulf; cooperating to improve amphibious capability; and improving counter-IED (Improvised Explosive Device) capability. The UK also welcomed increasing Japanese participation in NATO exchanges and joint exercises.

If successful, The RAF would have the best BVRAAM available and would make the F-35B exponentially a more potent threat on our carriers than previously considered.

Also, Any cooperation with outside military technology companies and powers that helps reduce the risk our soldiers are maimed by IED’s is extremely welcome.

Do we know if the required modification of the fin span and air intakes to be compatible with the air-to-air stations are also being done? If yes then is that planned to be completed in time for the initial block 4 integration? This would seem a very desirable modification since it would allow an F35 to go on a ground attack mission and also carry Meteor in the internal bays if it wanted to maintain full stealth characteristics. I agree that we are heading towards the best BVRAAM out there but needing to carry it externally or in place of… Read more »

AFAIK no work has been done.

If I had to guess, unless the US joins the project the likliehood isn’t great.
I wouldn’t be surprised if modifying this missile so long after design will be very expensive.

Google is your friend

Yes it has been done and yes, that has nothing to do with this article.

Hope these missiles can be turned into defence missiles so they could potentially shoot down any North Korean missiles launched by Kim “Gong” Moon.

or whatever his name is.

Britain to deploy fighters to the South China Sea; carriers post-2020 to the Asia-Pacific – Indo-Pacific Review

[…] of David Cameron and his successor Theresa May have courted Japan. At present the states have a bilateral agreement to develop a Joint New Air-to-Air Missile (JNAAM). In a clear deliberate signal of closer defence […]

Good a defence partnership with an island nation with similar needs to our own. If we start doing more with Norway and keep the cousins, France and maybe Italy on board for major projects things may start looking up.

No more Goliath projects of compromise and mediocrity just to say look at us collaborating.

Japan have developed a really good maritime patrol/survellience aircraft and although we went down the P3 route – make no mistake Japan has some good kit, as do our Scandinavian partners. Closer integration with these countries could well reap significant benefits.

I think this relationship with Japan is good news. We have much to learn from Japan as I agree with Gerard, Japan and UK have the most similar defence needs in the world, most notably the navy. So it’s worth noting that Japan has four times the number of helicopter carriers, more than four times the number of destroyers, twice the number of mine hunters and will have three times the number of attack submarines. Just saying… As Defence Select Committee says, we may have great and capable ships, but we have so little capacity, I hope the Govt will… Read more »

Whilst I agree with the sentiment of naval expansion (we do need more of a fleet ) especially drone carriers . Japan is well within strike distance of an aggressive Chinese govt.

I agree totally Ian and as for the March budget??? Your answer will prove to be true unfortunately – especially if the rumors are true that the Navy has to find 500m in new savings due to ordering the 5 OPVs they never wanted in the first place! How we do defence just boggles my mind! How can we ring-fence overseas aid to the tune of 11Bn EVERY year but not defence??? Absolutely ludicrous!!!

Will
Reply to  David

Who’s to say that if money was released from the foreign aid budget that it would (a) go to the MOD instead of, say the NHS and (b) be wasted e.g. on battlefield radios that don’t work, ships that don’t do hot weather, perfectly good marine patrol aircraft that are smashed up to make a political statement or on unecessary and expensive OPVs? I’m sure that some money is wasted in the overseas aid budget but cost benefit analysis of aid programmes around the world show that they deliver more than they cost. In the US for instance, every $1… Read more »

Ian Roberts
Reply to  Will

For me, we need to be thinking a little smarter. I don’t think it has to be RN OR foreign aid. I would like to see the development of a Royal Humanitarian Fleet paid for and operated from the aid budget because it would be aid. This would include hospital ships, transports, helicopter carriers etc would all be political and aid multipliers. If the MOD needs these ships in times of crisis it can requisition and lease them back from DFID and commission / decommission military systems at its expense. The UK then gets dual use physical assets to help… Read more »

Will
Reply to  Ian Roberts

Agree with all your points Ian Roberts. I’d have no problem with the money for RN naval operations in support of Humanitarian work coming out of the DFID budget. In similar fashion, I’d also pay for the nuclear deterrent from a totally separate budget and not burden the navy with the cost bar for the crews and maintenance. Perhaps the money could come out of Boris Johnson’s budget? That would only be fair, seeing as how the deterrent is a political tool as well as a weapon.

While I agree we should not be spending what we do in ‘Foreign Aid’ you are asking the wrong question. It wasn’t the Navy ordering OPVs they didn’t want it was the politicians who, post the Scottish referendum, promised them the world in the shape of continuous work and then had to keep the promise when the Type 26 took longer than expected. Somehow we managed to guarantee BAE a fixed sum to stay open and that was more than the OPVs would have cost. Competitive tendering ash been sacrificed on the alter of Scottish Devolution. In a normal world… Read more »

There is little doubt that we need more Navy not less. With GDP at 3% rather than creative budgeting at 2%
But i fear a one for one appoach at the already reduced numbers will leave us pixxing in the wind.

Amazing to think that a former foe in Japan is our closet ally in the region, was the empire that bad to have chased away the likes of Singapore and india in the modern day.

You’ll be totally mind blown when you find out that Germany & Italy are our top NATO allies in Europe.

Would be nice to see UK sell spear 3 to Japan in exchange for a corresponding purchase of their extended range asroc sub killers.

Despite the headline there are zero details here and nothing new. What would be interesting is learning how the partnership will solve the issue that the current Japanese seeker has a much larger diameter than Meteor making it impossible to fit without changes. Unfortunately the AESA technology they use, has the drawback that fixed AESA radars have a smaller field of view. They solved this with a larger diameter radar in their current missile. There appear to be 3 choices: build a smaller AESA seeker to fit Meteor and learn to live with the disadvantage that the host aircraft will… Read more »

This is a good news story. With integration of Japanese guidance systems the meteor should emerge as the best bvraam in the world. Hopefully leading to export success for Japanese and UK defence industry. I agree 100% with David. We have much to gain from Japanese joint working. Such as learning how to build up a powerful navy without massive,wastage of precious defence budget. Also agree how can we possible justify hiving £11billion a year to foreign countries when we cannot afford enough destroyers and frigates to meet national defence commitments. The defence select committee state I quote “the number… Read more »

Do you have the faintest idea how much Japan pays for its warships?