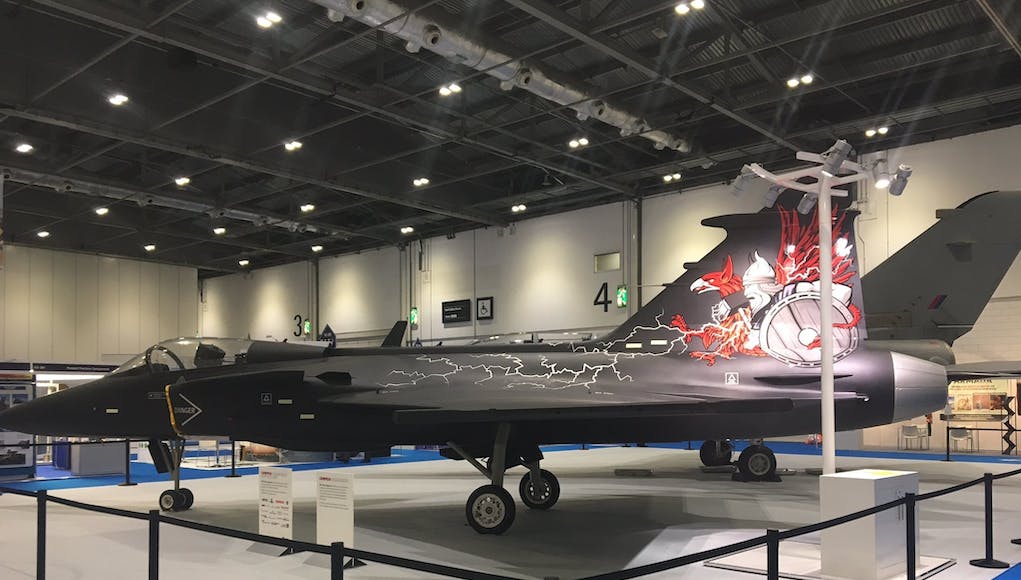 Saab have presented a new variant of Gripen, the ‘Aggressor’ at DSEI in London this week.

The company say the Aggressor is based on the ‘proven Gripen C-series and is the ultimate platform for the adversary air combat training market’.

There is a growing segment within the adversary air combat training market for highly advanced aggressor capabilities to be able to perform realistic combat training. Saab rather enthusiastically say that the Aggressor provides an exceptional, dissimilar opponent aircraft system against which pilots will sharpen and refine their combat skills ‘so as to fight and win against an advanced enemy threat’.

“There is a major difference in the capabilities provided by the aggressors on the market today and what the need is for the coming years. In order to train as you fight, you need to fly advanced combat tactics against peer and near peer opponents like the Gripen Aggressor. Essentially world class pilots need to train against world class opponents and that is the Aggressor”, says Richard Smith, head of Gripen marketing & sales at Saab.

The company state in a release:

“Gripen Aggressor is based on the proven Gripen C-series fighter weapon system, but has been customised for the aggressor role. It has all the renowned handling and flight characteristics associated with the Gripen C and its advanced sensor and datalink capabilities, but will not carry live armament.

The Gripen C-series is in-service across the world including NATO members and has a firm development plan with on-going enhancements in hand.”

An aggressor, or adversary, aircraft, is used to act as an opposing force in advanced military combat training. Aggressor squadrons use enemy tactics, techniques, and procedures to provide a realistic environment for the fighter pilots to train against.

Saab sees potential for the platform as a high-level aggressor option within both the United States Air Force’s Adversary Air (ADAIR) and UK MOD’s Air Support to Defence Operational Training (ASDOT) requirements, and wherever users look to prepare pilots for the challenges of sophisticated modern air combat. 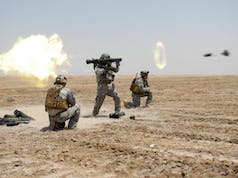 So could Gripens replace the current Hawk T1’s in the “aggressor” role in the Royal Navy’s 736 squadron ?
The aircraft will need replacing in the next few years and 30% of the components of each Gripen are made in the UK which is a bonus.

Good point, Gripen certainly can be adapted to a variety of roles.

Gets a “thumbs up” from me, also the Swedes will be less Pee’d at us for scuppering the Argie purchase of Gripen.

I didn’t know that much of it was made in the UK, that’s probably a bigger peace than we get from the Eurofighter. Would be nice to see the Baltic countries buy more of these given its great STOL characteristics and low radar cross section.

This would be an extremely good choice to train against but what I would say is… Leave in the capability to fire live ordinance as the fleet could also be used as a low cost back up force similar to the old Auxiliary Air Force of yesteryear!

Hope this is pulled off!!

I don’t. I can think of a lot of better ways to spend limited cash on he RAF. Dedicated aggressor squadrons are low down the priority list. We can achieve dissimilar air combat training by flying against other NATO nations. The US might look at the gripen. The existing aggressor airframes are tired… I wonder how well the Gripen would simulate SU35s, anyway.

Always liked the Gripen. Personally I would have preferred the Gripen to Eurofighter and the F 35

Greetings from Sweden I’m going to use google translator from an text published in one of swedens major newspaper the article is here http://www.expressen.se/kronikorer/carl-bergqvist/darfor-slar-gripen-alla-i-en-top-gun-fight/ I realize ( me writing not wiseman that the article here on ukdefence is about the aggressor plane but it’s still good stuff on the JAS 39 gripen from one off the few that acctually flies some off them). CARL BERGQVIST That’s why Gripen hits everyone in a Top Gun fight The general asked me when we were presented if I was happy to fly the Gripen. I said that I really was and exemplified it… Read more »