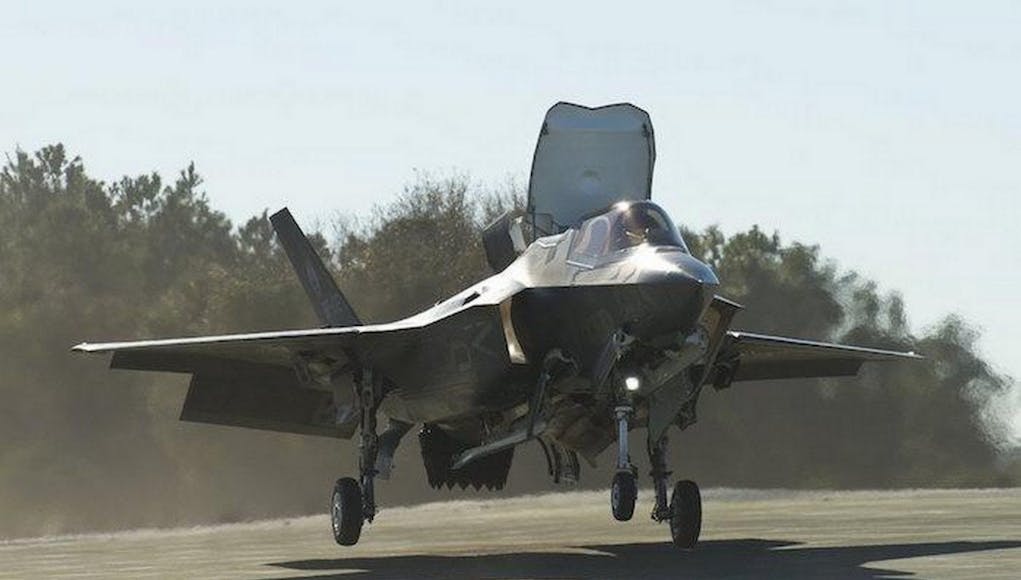 The F-35 Integrated Test Force team have wrapped up testing of the F-35B STOVL envelope with sloped surface vertical landing tests this month.

“The Marine Corps is an expeditionary force capable of deploying on short notice to crises around the world—even to the most austere environments, and the F-35 has an exceptional expeditionary capability.” said Maj. Michael Lippert, F-35 Pax River ITF test pilot and detachment officer-in-charge.

“Conducting the testing at Bogue Field provides the Marine Corps with a unique opportunity to continue the test and development of the F-35 in the [short takeoff/vertical landing] mode, while simultaneously exercising components of the [Marine Air-Ground Task Force’s] Air Combat Element, specifically the Marine Wing Support Squadrons at Bogue and MCAS Cherry Point.”

“We hope to be able to relax the landing pad certification limits in terms of maximum slope/gradients in the context of expeditionary pads—existing and future,” said Bob Nantz, F-35 Pax River ITF Performance/Environmental Technical Specialist.

The Pax River ITF will analyze nearly 200 data test points to assess how well the F-35B operates on varying slopes, impacts of head and tailwinds, and the effect of aft center of gravity in conjunction with ground slopes.

Erk: Sir, you know that SLVL you just did (and rather well may I add)?

QFI: Yes I did nail that one didn’t I? And thank you Corporal

Erk: Most kind Sir. But can I ask something?

QFI: Of course you may. Always pleased to help

Erk: Well Sir. After you left the aircraft it slowly started to run down hill. Our chocks didn’t work and your aircraft is now slowly sinking in the lake about 1/2 mile away. Can you make a note to put the farking Park Brake on next time…. SIR!