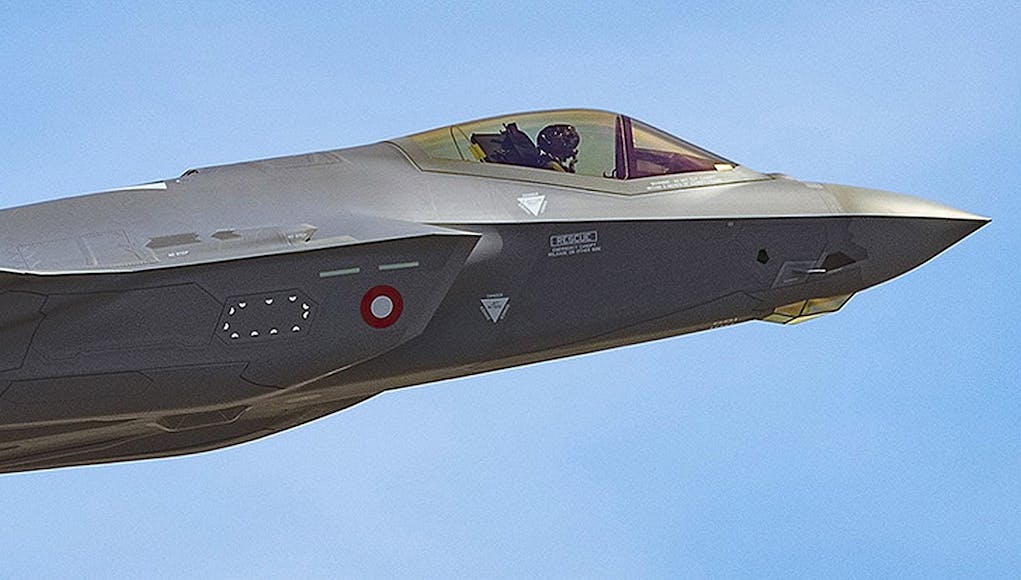 Lockheed Martin test pilot Joe Hutcheson was at the controls during the flight, which occurred at the Lockheed Martin facility at NAS Fort Worth JRB, Texas.

According to a news release from Lockheed, Hooch took the jet through a series of functional flight checks during a sortie that lasted approximately 90 minutes.

Following its maiden flight, the jet will complete a series of company and government checkout flights prior to its acceptance by the Royal Danish Air Force.

“Achieving the first flight of Denmark’s first F-35 is major milestone for the Denmark F-35 program and a testament to the outstanding abilities of our dedicated and highly trained joint industry and government team,” said Bill Brotherton, acting F-35 vice president and general manager.

“This team’s focus on delivering the most effective, survivable and connected fighter in the world will ensure the sovereign protection of Denmark and strengthen allies and partners through the NATO F-35 coalition.”

L-001 is scheduled to be delivered to the Royal Danish Air Force next month and will be flown to Luke AFB, Arizona, later this year for pilot and maintainer training.

And they are buying 27? Not bad for a population the size of Scotland. How many are we getting again?

To be fair they are replacing their F16s with these so the 27 aircraft will be the entirety of their fast jet fleet, down from 30 F16s.

I think the numbers and maybe even the type of our F-35 buy is linked to the evolution of Tempest and ‘loyal wingman’. There are suggestions that Tempest might be unmanned for example or that it might be an umbrella term for a family of aircraft some of which might be carrler capable. If this is the way they are thinking then they will have to design some kind of architecture which is inclusive of F-35 rather than dependent on F-35.

I think we will find out on Monday Paul. It does look like we are drawing the line at 48 and switching resources into project Tempest. I’m somewhat ambiguous about it really, as long as we have enough F35’s for carrier strike and a potential Tempest UCAV has a boot in both camps with Carrier capability in the 2030’s to supplement F35B. I think 48 will mean almost exclusive Carrier use, but I’m getting the impression that the RAF is very much more interested in getting gen 6 Tempest, with its manned/ unmanned mix into service as early into the… Read more »

I suspect we will continue to drip feed F35B at a low buy rate of 3-5 units per year to deal with attrition/air frame hours and buy into later blocks.

That is a politically acceptable as it is such a long program.

Something to bare in mind is the contractual obligations and work share in the F35 program…. The Uk has a (comparatively) large work share of every F35 built based on the the commitment made when we became the only tier one partner….

If we slash the number of F35’s ordered, then there will be a corresponding substantial reduction of work share…

My eagle eye noticed this Danish aircraft has coloured roundels. If we could get rid of that hideous greyscale RAF roundel I’d be happy

Oh that would be lovely. Go back to a roundel similar to ww2. A thin white line on the outside, blue on the inside and red in the middle.

Honestly, I’d be happy with a standard low-viz roundel and fin flash we had on camouflaged Tornadoes.

The F-35 roundel is some kind of camouflage, it seems so.

Just a reminder for those headed down into the bunker on the 16th. I believe the details proper regarding MoD are released on the 22nd with the DWP. 16th is more about the wider ISR. More deployed, more Pacific focussed, Cyber, Space, blah blah blahhh, and so on.

Space might be interesting Danielle. That can eat up a lot of money but potentially extend the reach of the UK.

Yes. Need to look closely at detail beyond the grandstanding, mind. Shuffling the chairs and creating an RAF Space Command and a Space Directorate at MoD, ( when the RAF has already operated satellites decades ago ) won’t count for much if there is no new teeth behind it beyond the existing NSPOC, Carbonite 2, Skynet, Artemis project, and so on. Same goes for these other uplifts. ComStratCom is tweeting all the right buzz words, and talking of SF and Cyber, but what substance will come from it while capabilities are cut at the same time. And those areas are… Read more »

6th gen Tempest is intended to deliver a range of options and I expect one to be a manned combat aircraft. If that’s the case then the RAF needs to have experience on 5th gen architecture and capabilities leading up to that point which most agree is at least 10 to 15 years away. As good as Typhoon is, and it is good and will become more capable, it’s still 4th gen. The only 5th gen aircraft available to us is F35. The RAF will need to practise to meet their obligations which is why the F35 force cannot be… Read more »

Mark B
Reply to  JohnM

Looks to me like 50% Carrier, 25% RAF and 25% maintenance, training and reserve although I’m guessing those are not fixed and the RAF might have anywhere between 0 and 36 aircraft at times.

Ive heard rumblings that not many Defence high rankers in the Danish Airforce are happy with just 27! Just enough for a constant QRA and possibly 4 airframes for any future deployments, and not much else.