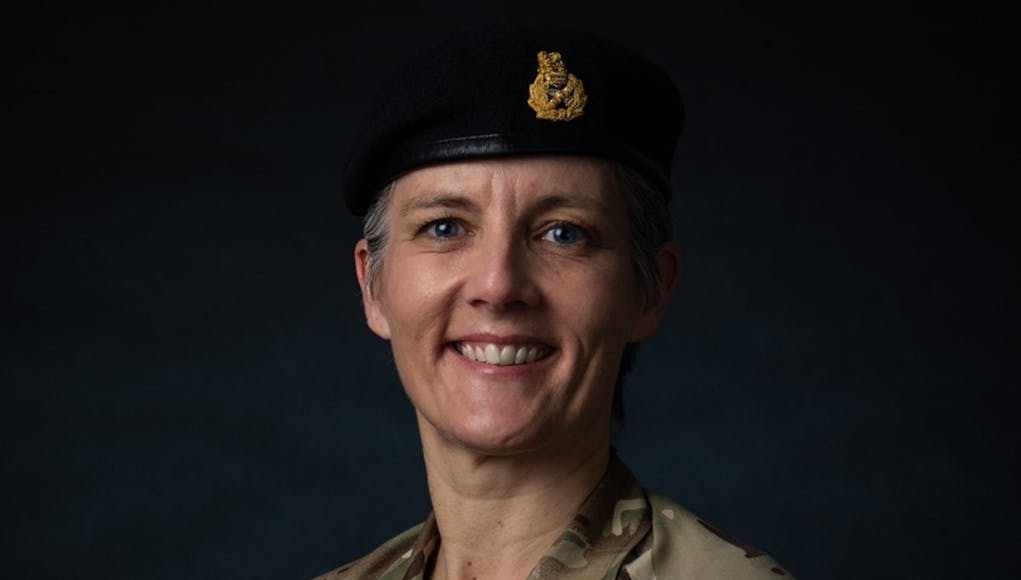 Major General Sharon Nesmith has become the first female officer to command at the 2 Star level in the British Army, as she takes up the role of General Officer Commanding (GOC) the Army Recruiting and Initial Training Command (ARITC).

According to the British Army, Maj Gen Nesmith, who joined the Army in 1992, is taking leadership of the division-level organisation responsible for the recruitment and subsequent training of soldiers and officers throughout the Army.

She was quoted as saying:

“I am delighted to be taking command of the Army’s recruitment and training. I am proud to be leading the Command responsible for developing excellence in our soldiers and officers.”

As GOC of ARITC, Maj Gen Nesmith will be responsible for recruiting and training the right quantity, quality and composition of Regular and Reserve officers and soldiers to the British Army.

“To do this she will oversee a mixed military, civilian and contractor workforce of more than 6,000 people spread over approximately 130 locations in the UK and overseas. Each year she will manage a budget of over £200m and the training of over 35,000 students over 280 courses. As the second ever female Major General and the only currently serving Regular female Major General she has worked her way up through a number of appointments, from commanding 1st Mechanised Brigade HQ and Signal Squadron (215) deploying on Op Telic 10, through to commanding the 1st UK Signal Brigade.”

The Army also say that following promotion to Major General in March 2019, she was appointed Director Personnel (Army), where she oversaw the personnel strategy and policy required to support the workforce, including support to mental and physical health and wellbeing, enabling inclusive culture across the Army, and improving behaviours across the whole forc

Well done to her. Not an easy accomplishment.

I couldn’t agree more, but in away it is sad that it is still ‘news’.

I read somewhere a little while ago that the RN is concerned about the slow progress that women are making in the promotion stakes, given that they represent 10% of the work force (at the time).

Sounds like a ploy of woke brigade. Can do any of the tasks the lads will be training to do? Fireman carry, 30-miler, bayonet charges?

I’m in favour of female combat medics, but not as frontline soldiers. If we put a 125lbs woman against a 200lb Russian, we’re not going to win are we?

And when do you expect the GOC of ARITC to go hand to hand with a Russian?

After 28 years service in the British Army, I don’t think she has anything to prove do you? Bloody good on her ??

Well said. I’ve worked with any number of formidable women who’s mental and physical fortitude would leave your average 200lb bloke in the dirt.

George, you are treading very old ground. Females have done far more than fill Combat Med Techs roles (itself a frontline role) in recent years. There was a very long running debate within the army about opening up combat roles to women from at least 2001/2 including studies that looked at fitness and strength etc and finally David Cameron declared in Dec 2015 that all combat roles would be open to women.

The British Army is woke and the above “inclusive” speech says it so. Nevertheless she might got there because of her qualities and not because she is a female. She already had an operational combat role and seems to be a communications expert. But this position is very different, it will be political, bureaucratic, logistics and management with some vision to the army future, not a combat role. Her qualities in management will be the stress point not if she can deploy a division in front line combat or do a Patton in Southern France. Instead if she was posted… Read more »

This is the 21 century! no need for carrying heavy gear when UAVs, USVs and UGVs will be going much of that carrying and as for yomping 30 miles well we have things called vehicles and helicopters for troop transportation.
Things have moved on from the Falklands.
Also, there are such things as, handguns and rifles which we point at the enemy long before they bloody get close enough so the size of soldiers is irrelevant
Your out of touch with times

Not so out of touch as let me assure you the carriage of heavy combat loads is routine thing. The belief that a super duper unmanned vehicle will carry the extra link, the 81mm bombs, the Harris radios, the extra 3 x bandoliers of 150 rds, the NVGs, the heavy batteries, the med packs, the water, the food, the 7.62 link for the GPMG, UGL bombs, then loom zt the size and weight of the weappns carried, the ladders, the breaching kit, the L2s, the smoke, and the special to arms kit such as RE kit, FST comms and obs… Read more »

Loom zt…..mmm I think that was supposed to say “look at” , sorry, big hands and rum, matched with a weeks leave….not a great typing combo….?

Every single thing you just wrote, is utter guff.

Goodness me, you have to be joking? When at this very moment, we urgently need to attract and increase recruitment? The last thing our Defence Forces want is anyone who thinks that 50 percent of the population have less potential to contribute positively to future performance!?

Tell that to my knees.

Leaving aside the physical limitations arguments with regards the issue of women in combat roles, MG Nesmith has come from the R S, through to DP ( A ) and now ARTIC ( another blasted rebranding, what was wrong with ARTD???! ) so what’s the issue?

Women serve in DSF, and were effective in the Great Patriotic War at places like Stalingrad, so they have their place.

Not woke at all for me.

I have absolutely no problem with the General being a lady. What does bother me is how many Maj Generals does an army with 2 and a bit divisions need?
1 for 1 UK Div, 1 for 3 UK Div, 1 for Force Troops + maybe 1 Maj Gen for recruitment (as above), maybe 1 for doctrine & procurement & a couple for NATO roles + maybe a couple more for deputy roles to higher ranked Generals. So Max 10 Maj Generals. Currently we have 38!

Well, there are dozens in Main Building alone in various roles both operational and in support directorates that I cannot be bothered to list, all of which require a figurehead of certain rank. You also have the DSF, which was once 1 star until the directorate was expanded, and GOC London District, Sandhurst and Shrivenham also all require such officers. You also need to take into account that much of the military/ MoD is now purple, with joint directorates so others of MG 2 * rank will be with areas like DES and NATO roles, or in the BMS in… Read more »

I wish her good luck with the recruiting side of her remit if Capita still has anything to do with that role.

She certainly has her work cut out if recruitment and Capita are anything to go by over the last few years. Lets hope she is there to do the job and, sadly, like many others in that position and rank, she doesnt just tick along, nodding to the powers that be to ensure her next promotion and job. Recruitment and retention are two of the most vitaly important jobs in the military.

A position like this is always overtly political, not only army departments competing for resources but also with real political world outside. You have to think what message you say to potential recruits and existing personnel, how to appeal them without lying even knowing that any Government can change a policy and the department might end up lying on promises made.

Recruitment comes in fits and starts, you will always get the young people who want to join, and nothing will deviate that thought process (like me) and you will have the people who are struggling depending on the current economic situation….the first are easy, the second are not! Like it or not, war and conflict is always a great recruiter, as between 2006-2012 recruitment was no issue as you had Afghan on TV every day, and no matter how bad it was, on TV it is a little more sterile, more exciting and challenging. At the moment, while we are… Read more »

Better late then never I guess.

Side note, how many women comments here? i am only aware of 1 at least by the avatar.

By the Avatar? There are few of those here. I can only think of 1 looking female , and I’ve always taken Dern as male.

Yes i was thinking of Dern,i thought was a female.

Not many females but Harold I think is certainly a fanny……i know I know I will grow up.

I never knew English and american have different meaning for fanny, I only knew Ami version. Thanks airborne ?
Side question, assuming you ex para, ever wish you had equipment like VDV?

VDV were so much bigger, more kit but less quality per person. Different concept of ops, VDV were there to disrupt rear echelon BOAR, we were there in the old days to stop them, or at least slow them. And proof is in the pudding, we have continued our role an operational deployments all over the world, whereby VDV are sat about waiting to take over the Baltic states. But as one airborne soldier to another, they have my respect.

Yes, understand role during soviet days, today it is force looking for a role, not enough planes to use in mass anymore so now strategic reserve. Training is now much better and goal of 80% contact soldier even as military plan to expand force to about 72,000 from memory and give tanks and artillery, be interesting to see how that works out. They have served well in Syria, Ukraine, Lybia and I have seen small numbers in Iran when I was there, they help with training I was told. Lucky Baltic states are so patient, doing all that waiting for… Read more »

Reports at all levels suggest this General has been outstanding – soldiers have the utmost respect and are delighted she has climbed the very Rocky Mountain. That tells me far more than any 1st or 2nd SRO comments. Let’s have more of this quality.