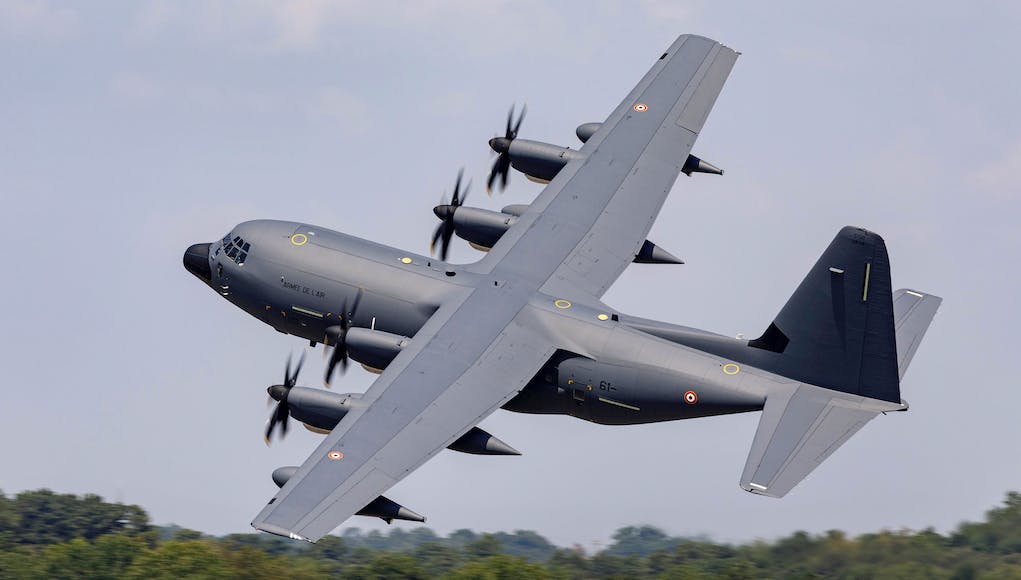 France will receive a total of four Super Hercules aircraft — two C-130J-30 combat delivery airlifters and two KC-130J aerial refuelers — through a Foreign Military Sale with the US. government.

“In choosing to operate both the C-130J-30 and the KC-130J, France has built a diverse airlift fleet that expands both the capabilities and global reach of the French Armed Forces.”

Lockheed say that as the preeminent tactical aerial refueling tanker, the KC-130J is a “battle-tested solution that takes full advantage of the tremendous technological and performance improvements inherent in the C-130J Super Hercules aircraft”.

In 2018, Germany announced the acquisition of a C-130J-30/KC-130J fleet, to be operated in partnership with France — making this first such operator relationship in C-130J history.

“In 2108 Germany announced the acquisition of a C130J-30KC-130J fleet, to be operated in partnership with France” Or, in other words, can we do bare minimum, pay bare minimum to get a capability at the cheap, at the expense of others. Ah Germany, fast becoming a military irrelevance to NATO.

No wonder Germany’s the only G7 nation that has a surplus of many billions each year. They need to start buying and building like France and The UK does. But weirdly Both France and Germany have Far more millitary personnel than the UK! According to these stats – https://en.m.wikipedia.org/wiki/List_of_countries_by_number_of_military_and_paramilitary_personnel

Cam they have more people but not the capabilities. Its cheaper to have a shed load of light role infantry Battalions, than expensive and role specific equipment capabilities. Although France is a lot better than Germany in that, and unlike Germany, not afraid to gets is troops into a scrap.

There have been restrictions on Zee Jarmans putting boots on the ground for fairly obvious historic reasons.

Is this not a strange choice? Why didn’t they opt for the A330 MRTT?

BB I’m reliably informed, having spoke to a couple of French ex 2 REP colleagues of mine, its more to do with the ability of the C130J and KC130s ability to use rough strips, and provide direct support to Frances SF and their ongoing battle against the various brainwashed scumbags in Northern Mali etc. Its a capability France is missing (as are we with the KC) and it would seem to be the choice with the least risk and leadtime/cost. I could be wrong, and willing to be enlightened. The KC and the J fly higher, faster and have more… Read more »

Yeah I agree Airborne, and we dont hear much about the French missions and success or failure abroad but by most accounts I’ve read they’re doing good. The French British alliance should be getting allot stronger after that LANCASTER HOUSE treaty where we agreed to work on joint use of aircraft carries, 10,000-strong joint expeditionary force and unprecedented new levels of co-operation over nuclear missiles and Nuclear testing and technology. France and the UK kicked each other’s asses for hundreds of years (UK winning more times with less numbers obviously lol) but now we should work together far more and… Read more »

We do a lot together already Cam, much of it not noticed by the tabloids! But yes, the French lads are good at what the do, and so much more professional than they used to be 20 years ago. Both countries have a similar outlook on foreign policy and defence.

The major reason why they bought these aircraft is simple. It’s the best option for doing aerial refuelling of their helicopters. The Super Pumas are required to do long range insertions and therefore require airborne refuelling. The A400M at present cannot do this, as the props generate too much turbulence. They tried with the standard 90m hose, but it kept getting buffeted and hitting the tail. They have tried a 120m long hose, but the turbulence is still quite severe.
The good old Herc with lesser power doesn’t cause these issues.

The Hercules is great for the likes of Africa where the French are deployed in numbers these days and where landing strips are short and barely existent and the Hercules can also land where others can’t, Good choice really.

France has bought 15 A330 MRTTs as well. These are for refuelling SF helicopters (Caracals), and the other C-130s primarily support SF. I imagine the Germans have them for the same role – and the joint force helps maximise utility. Germany’s A400Ms have refuelling capability too.

No, the MRTTs cannot fly slow enough safely to do aerial refuelling of a helicopter, this is the sole reason why they have bought the C130.

I meant that ‘these’ C-130s (the ones in the article) are for SF helicopter refuelling, not the A330s.

I thought the A400M had a limited tanker capability with underwing pods?

It’s still being worked on. The hose was being moved by the airflow too much for safe refuelling. Like the issue with paradrops it will be overcome but it will take time. But this is primarily for French SF in Africa. The distances involved are colossal (the Mercator projection manages to make Africa look small…) and for their Cougar’s to get around they need AAR, plus the transports are safer to use on unprepared strips than a much larger, hugely expensive A-400 (remember A400 is the main French strategic airlifter, its their no.1 asset, the UK as C-17 above A-400).… Read more »

I had understood it was a speed issue also. Turbo props can fly at slower speeds required to refuel helos, which would struggle to keep up with a A400, which would stool if flown at those speeds.

The A400m is also Turboprop.

Was thinking voyager which is our only air to air refueling platform currently.

Article on the testing of in-flight refuelling of helicopters by the A400.

Yes, Airbus have managed to refuel a H225M Caracal helicopter from the A400M. The main problem before was the standard length hoses which were 90m long, these have been replaced with 120m length hoses. The issue with the shorter hoses was that turbulence caused by the prop wash forced them up towards the T-tail. Also because the helicopter had to get closer to the aircraft it suffered severe buffeting. The 120m ones go beyond the tail, so the propwash has less effect on the basket or the helicopter. There is still a significant amount of turbulence behind the aircraft due… Read more »

This is a great advert for the A400M. All the primary customers are still buying and operating the legacy aircraft the A400M was slated to replace. Don’t get me wrong, the A400M is a nice piece of kit to have, if you’ve got the money to afford to operate three types of military airlifter in your air force as the RAF does. But last time I checked, the UK hasn’t got much cash for defence and had to make a lot of drastic cuts a few years back, which involved culling core capabilities such as carrier strike, maritime patrol and… Read more »

I never got the point of the A400M other than as an economic and political project. The C130 is proven tacticallt and mature. The C17 fits the strategic need. The A400M is not fully capable even now and cost far too much.

Now France should buy a squadron of heavy lift helos like the CH-47F so they don’t have to rely on the generosity of other nations to provide them this capability.

Yes, to be fair other nations, including France, help out when we have no MPA available when the Russians come snooping.

They certainly do, despite the utter mess and ground hog day like bun fight with the EU ( and each other), military forces quietly carry on cooperating and getting the job done.

French MPA’s looking for sticky beaking Russians in our back yard and our Chinooks and SF’s backing them up in the dusty back and beyond.

It’s all in a day’s work and long may it continue.