The aircraft and crews will conduct an interoperability mission with the Italian Air Force under the existing ‘Plug & Fight’ series.

According to NATO here, within the concept of ‘Plug & Fight’ a small contingent of personnel and aircraft from one Ally conducts operations with another Ally by docking on existing structures, thereby further developing interoperability during a live deployment.

“A highly innovative concept, ‘Plug & Fight’ operations have been executed between the German and British Air Forces before in Romania as well as during Baltic Air Policing in Lithuania and Estonia.

The planned cooperation between the Italian and German Air Forces will enable Eurofighter aircrew and support staffs from the two nations to work closely together to launch enhanced Air Policing missions. This kind of event offers real benefit to all NATO personnel, as well as enhancing Allied interoperability, building trust and practising essential communication procedures.”

The Italian and German QRA fighters will maintain the same reaction times and ensure 24/7 readiness for NATO, but the additional aircraft and personnel will offer “extra resilience” to the Alliance, say NATO.

For all those who doubt Germanys commitment they have sent every working Typhoon they have. Fair play to them 😀

They even provided a photo of it for the article. Bless em.

Yeah did they pack their beach towels? Seems like Romania is the soft option where they can spend time on the beach.

Their armed forces are in an abysmal state, I remember reading an article a few years ago about how just four of their tornadoes were I an operational state.

They spend almost as much as we so on their miltiary. Makes you wonder what gaps /holes are hidden under the surface of our capability.

I actually had to check this, and actually you’re right, wtf are they doing with it?? Genuine question!

My guess is our government likes showing off kit but keeps details of logistic supplies quiet.

I would guess if you openned the supply cupboards and did a check we would find we have almost none, and definitely not enough to do a long term major deployment without UOR. The SA80 question showed that we don’t have enough to supply the entire army/reserve force, so couldn’t deploy fully. Wouldn’t be surprised if same was true across the board from missiles to body armour.

Steve, while I agree some items in the inventory might well be low, SA80 is hardly a glowing example. 130,000 plus A2 and, was it 17000 A3 comfortably supplies the Army and Army Reserve when one takes into account how many of an even 73000 army are going to be non combatant even in a major war and a 30,000 strong reserve which in reality is largely unemployable. It still leaves enough spare for the RAF and RN. The whole force will never deploy fully, I wont lose any sleep over that one. I also believe many items of supply… Read more »

I guess with the royal marines getting new weapons, that frees up some. Just feels low as it doesn’t give any flexbility for surge numbers if needed, taking account that not all the quoted number will be servicable. If you look at Russia or the US they have massive reserves of gear, that could be brought back into service if needed. Not a major problem, as we are not on a war footing, but to me it just indicates that maybe the stocks are not where they should be also of other things. That combined with various other stories of… Read more »

You can say that again! Absolute shambles in various areas.

The point you made the other day about just what % are serviceable might well alter my view regards SA80.

But secrecy hides incompetence as well as things we don’t want the enemy to know.

Realistically any potential enemy will have a advanced spy network and will have details of any gaps /issues, afterall even the top secret f35 plans were stolen. It’s only practically keeping it secret from the public and therefore avoiding accountability.

I heard there is 12 billion worth at least of kit in war reserve. What it is I don’t know. Some MP was on about it costing 270 million a year to store it all and it needs reduced. Really depends what it is. Hopefully not lots of green goddesses lol

No, they were disposed of years back I believe.

this is where the M.O.D fixation with the BAE sales catalogue is proven.

Especially as our navy is much larger. I know the Germans have a massive lack of individual equipment, I recall some German officer jokingly exclaim it’s more than we get or words to that effect in reference to the 5,000 helmets donated to Ukraine

the heckler kochwhich is an alternative to the sa80 is an excellent piece of kit the marines, sas sbs and police units in the u.k us the mp5 semi/full auto version version.

ships too with only 3 submarines operational

It’s a throw back to their ‘Eurofighter light’ option of the early 2000’s, they also lacked some of the ESM and probably some of the active countermeasures system too.

Seems odd not to retrofit a plug and play part like IRST at this point however, it’s an extremely useful sensor….

Learn something new everyday. I assumed they were all on as standard and it was only the ecm systems that raf had different and the upcoming radars.

After early experience with IRST on their MiG29, Germany wasnt convinced of the necessitiy of PIRATE on a non-stealthy aircraft. Basically, LW was 1) short on money 2) of the opinion that its range was generally too short for the purpose, esp since the LW would usually fight under the cover of AWACS radar aircrafts in Europe providing targetting data. Just in case, they still got (about 100?) pods with IRST sensors that can be put on if the mission requires it (i.e. if there is no AWACS around). The new tranche 4 ordered last year probably will get PIRATE,… Read more »

Only one for test and evaluation I believe? 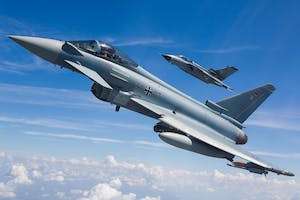 Lucky Romania ! I bet they feel a lot safer now.

they’ve refitted and upgraded their ex RN type 22’s and now designate them destroyers which we should have done, buying a couple back from either brazil,chile,romania and crossdecking(swapping) artisan and ceptors from type 23’s already slated for disposal and designating them as destroyers, would take a lot of the strain being dumped on the type45’s.

I suppose at least they are doing something, I hope they are getting their Armour ready too, we might be needing those Leopards revved up and heading for Poland soon..

Nordstream 2. They won’t do anything without clearing it first unfortunately.

Like the UK, GER heads a EFP battlegroup in the Baltics (Lithuania) Unlike the UK, GER is actually increasing its tank fleet from 228 to 332 Leos. The first 32 new LeoII A7V fired their first shots with the Heer last week. (The downside of the tank modernisation program is that too many A6s are currently parked on some Rheinmetall courtyard waiting for upgrades to be installed ..) They, as well as upgraded Puma IFVs, are currently prepping for the 2023 VJTF (NATO rapid reaction brigade). All in all, the German parts of the 2023 NATO reaction force (NRF) will… Read more »

turkey,greece, romania and bulgaria( with their mighty kayaks!) are a useful ace in the pack if only as staging and basing rights

nice of germany to finally spare the time 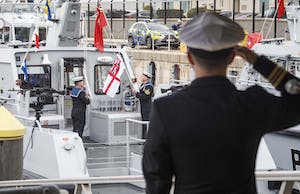 May 11, 2022
HMS Cutlass, the first of two new high-speed patrol boats, has been commissioned into the Gibraltar Fast Patrol Squadron.