The newly unveiled Bundesnachrichtendienst (BND) HQ located in Berlin is now home to the world’s largest intelligence service in terms of geographical size.

The new site, with a footprint of 25 hectares has cost an estimated £870m to construct.

The complex, using 135,000 cubic metres of concrete and 20,000 tonnes of steel, took 12 years to complete. Its creation has proven controversial, as it was finished significantly later than expected and over-budget.

The completed site is located in the heart of Berlin close to the former Berlin wall, after being moved from Pullach on the outskirts of Munich where the BND was founded in 1956.

The construction process was plagued with problems, from blueprint plans being stolen, to huge floods resulting from thieves removing the taps off sinks, nicknamed ‘Watergate’ by the German press. This fiasco threw into doubt the capacity of the BND to secure the perimeter of the site whilst it was under construction.

The Promise of a Rejuvenated BND

When stationed outside of Munich, the BND wasn’t regarded as a serious world-beating institution. But former BND chief Hansjörg Geiger believes that after the move to Berlin, the BND will “be taken more seriously” as it will be able to play a much more proactive role in intelligence gathering, with a greater capacity to act.

Federal Chancellor Angela Merkel stated at the opening of the new site, that “now, more than ever, Germany needs a strong and efficient foreign intelligence service”.

The BND is a symbol of Germany’s belief in becoming a world leader in intelligence, despite the history of intelligence gathering being viewed with staunch contempt in Germany. The distrust of such organisations is rooted in memories of the Stasi and Gestapo.

When addressing this issue at the complex’s inauguration, Merkel said that “a healthy distrust is helpful, but being overly suspicious is a hindrance”.

When it was revealed that German intelligence services co-operated with British and American services to spy on European officials and companies via digital communications, it shocked many and led to reduced US-German interactions.

Angela Merkel hopes that the move will secure Germany’s BND transition from Pre-to-post-Cold War context and responsibility. She also hopes to build the reputation and trust-levels of the institution.

Merkel clearly believes in the grandeur of the new site, stating that it would “impress any foreign intelligence service”.

Well, that isn’t a sinister looking building. The Germans will need somewhere to run the EU from.

Your thinking of Gestapo HQ on Prinz Albrecht Strasse eh?

Who was it that said headquarters expand in grandeur as an organisation declines? In a time of expansion there is no time to plan the perfect HQ.

Read this years back when someone was talking of the Sir Henry Leach building on Whale Island.

A Guardian article (https://www.theguardian.com/world/2019/feb/08/worlds-biggest-intelligence-headquarters-opens-berlin-germany-bnd) says “world’s biggest” and then quotes “Approximately 3,200 of an expected 4,000 employees have already arrived”. Wikipedia quotes GCHQ headcount as 5,806 in March 2016. Admittedly spread across a few sites but I’m not sure what metric the Guardian report is using to call the German one the “world’s biggest”. The 25 hectare footprint I suppose but both employee and internal space wise I am suspicious of the claim given the NSA & GCHQ facilities out there. In all these cases we don’t really know how much floor area is underground (computer rooms etc) so I’m… Read more »

What a ghastly building…looks more like a bloody prison! Makes the design of our GCHQ look positively inspired. Is this a look backwards to the ‘Brown House’?

Afternoon Julian. The GCHQ site at Benhall is already full, which is why Oakley was retained for a time. Contractors also now have their own building located elsewhere. The Computer hall is beneath the central garden within the Doughnut, and is considerable. Many of GCHQs staff are at the outstations, and even more are provided by the 3 services. The BND site can be as big as it wants. The main game in town is 5 eyes, of which Germany is only a level 2 or 3 partner. Size of the HQ is less important. The UK, through the remnants… Read more »

That’s a very strange looking palm tree next to it.

It’s a lever, when you pull it the building peels back and then Germanys very own Thunderbird 1 is launched!

Sadder is that you’ve messed with my head. All that you say is 100% correct but given that T1 took of verticaly from below the pool I’m now desperately trying to remember how the bigger vertical launch rocket that went up to the space station (Thunderbird 5) launched. I can sort of remember the crew getting taken to it on a sofa that travelled along the floor of the hangar and then rolled onto a hydraulic ram that lifted it up to the crew area close to the nose cone but I can’t remember what concealed launch area it launched… Read more »

Germany positioning itself as the natural choice to spy on *ALL* EU citizens.

Thank god we’re out of it soon then !

You do know Captn we do exactly the same?

Thunderbird 3 launched from a silo below the roundhouse on the island.

Thunderbird 5 was the space station.

Thunderbird 6 was the name of one of the Thunderbird films, at the end of which a de Havilland Tiger Moth was unveiled as ‘Thunderbird 6’

Let’s be honest though, that palm tree really does look like an import from Tracey Island. And the building looks like its come straight out of the 1930s. …

F.A.B. – Thanks Lusty. Now that you’ve reminded me it all comes flooding back. And let’s not forget “the mole”. That was another thing carried in T2’s pod wasn’t it?

Yes, indeed it was! Along with Firefly and a fair few others.

Julian, When I were a lad, I was told that F.A.B. meant, (F)Thunderbirds Are Brill !

Surely in light of the article being about “spying”, we should mention “Joe Ninety”

Bleak and alarmingly sinister….. how many torture chambers does it have again?

So when this is fully operational, the Germans will know exactly what the Russkis are up to.

Unfortunately they won’t have any operational kit to do anything about it. Sounds logical. 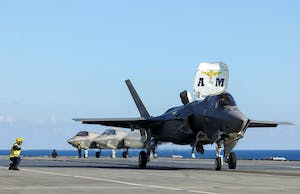 November 23, 2021
This is the first time in history that three nations have flown jets from the same aircraft carrier with British, American and Italian F-35B jets taking off from HMS Queen Elizabeth.