Soldiers from the Highlanders (4th Battalion, The Royal Regiment of Scotland) will head to Ukraine to take part in Exercise Cossack Mace.

The exercise is in partnership with the military of Ukraine.

The British Army say that the soldiers from Catterick based 4 SCOTS will take part in a series of testing serials that will focus on their infanteering skills and co-operation with friendly militaries.

“Following an initial focus on those low-level infantry skills and trades that form the basis of a professional infanteers job, the exercise will move onto a larger scale to develop higher level co-ordination and allied activity. Both nations will be able to practice their skills in the field and continue to develop their high-quality capabilities.

As well as continuing to practice their military skills both sides will take time out to learn something about each other’s cultures and history, an opportunity to find out about each other’s difference but also a large amount of shared viewpoints and culture.”

4 SCOTS are a mechanised infantry Battalion based in Catterick.

The British Army say on their website that 4 SCOTS recruit mainly from the Highlands and Islands of Scotland and their traditions, built around the historical Highland Regiments, can be traced back hundreds of years and encompass every major conflict the British Army has taken part in.

“In recent years they have deployed to Iraq and Afghanistan. Highland soldiers have a worldwide reputation for skill and ferociousness in combat and this, along with the famous Kilts and Pipes & Drums of a Scottish soldier make 4 SCOTS and the Royal Regiment of Scotland one of the most distinctive and well-known infantry units in the world.

Relationships between British and Ukrainian governments and Armed Forces have gone from strength to strength in the last thirty years and the exercise reinforces this growing tradition of cooperation that looks to continue into the future.

With the Ukraine looking to improve their interaction and interoperability with NATO this Bilateral exercise is a visible commitment to the Ukrainian Armed Forces and Government and highlights the United Kingdom’s desire to support the Ukraine.”

Warrior could ‘be used in some roles’ until Ajax enters service 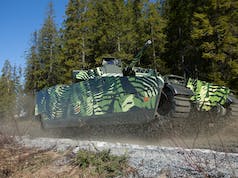 British Army to showcase ‘vision of the future’ at defence exhibition

Wonder who can drink the most…The Scots or Ukrainians?

I’m sure there will be plenty of tests. Whisky V Vodka.

My money is on the Ukrainians: 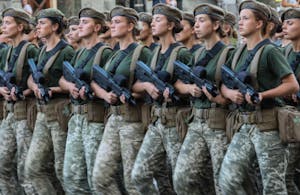 Who needs a kilt?

I wonder if they will adopt one (like a lot of countries have) after the Highlanders leave. Just for the info, the above picture is of Ukrainian women in the army whom the Ukraine have 57K in uniform.
https://www.kyivpost.com/ukraine-politics/112-ua-defense-minister-reports-57000-women-serve-in-ukrainian-army.html

Let me assure you, one Scots woman will be more ferocious than 57k Ukrainian women…. I should know… I was married to her!

Let me assure you, one Scots woman will be more ferocious than 57k Ukrainian women

My best mate a few years (a jock) ago was the PTI on camp, he was a hard bastard, and took no prisoners . His wee wife scared the crap out of all of us.

Wonder how the Ukrainians will get on with the Jock version of English? Gets worse when they’ve had a dram or two!

I seem to have read some time back that the Scots Guards found it difficult recruiting. This may be mistaken and happy to be contradicted. But it asks me the same about the various battalions of the Royal Scots.

I’m surprised it is in Catterick not Scotland.

In short, yes the Royal Regiment of Scotland really struggles to recruit; in fact at one point the joke was that “here come 4 SCOTS, the rest are Fijian!” In 2015 there was an 18 month waiting list for The Rifles, but the Scots couldn’t fill their places leading to Rifles recruits being asked if they’d be willing to go Scots if it meant joining earlier. It’s one of the weird ones where cutting the regiment is politically sensitive despite the poor recruiting record, but you can happily chop for example, 2 RRF who had no problem recruiting because no… Read more »

Bob Stewart revealed in commons that 1 inf batt only had 170 troops. He didn’t name the Regt but fair to assume which it was.

Thank you for that… it does seem disgraceful. Plus I guess all the none royal scots would happily serve in an english regiment.

I wonder if the problem is army recruitment policy or the recruitment delivery organisation, Capita.

I thought the same about 2 Mercian and couldn’t help thinking that because they’re Midlanders they were considered politically and Politically unimportant like all things Midlands.

The issues with recruitment for RRS only began after 2006 with the daft decision taken in London to amalgamate these historic and legendary regiments.

RRS around 400 short of target strength and are in same boat as Welsh Guards, Mercians, Irish Guards and Scots guards. This is what happens when you outsource recruitment.

Thankfully, I re-read your post because at first I read it as referring to 4Scots; however, it is still very poor across the whole Regiment.

Couldn’t agree more…. I seem to vaguely recollect from the 90’s that the Scottish Battalions were pretty well manned/personned or whatever the correct terminology is now a days, whilst a lot of English battalions struggled for numbers…. I never did understand why they culled the successful battalions… that’s politicians for you…

Manpower and manned let’s call a spade a spade and not wilfully engage in the bastardisation of the beautiful English language by these lunatic new age hippies that are destroying western culture with their [email protected] S%*te talk.

Yes in answer to your pointing out why they culled they did it cos they are a bunch of Kents like 99% of all politicians.

Royal Green Jackets weren’t lost, they formed the Rifles, one of four regiments of the Light Division who did so by choice.

Names are just names and not relevant to modern operations. We work in battle groups now, named after the unit HQ around which they form. But task organisation means that for example 5 RIFLES battle group might only compromise one company of 5 RIFLES and two sub units from an Armoured regiment depending on the task, plus artillery, engineers etc.

Your comment about task org’ing for operations is true, but does that really mean that regimental heritage, tradition and names are unimportant?

Increasingly less important I think. Maybe it’s because I was in a regiment that regarded itself as forward thinking, but times change and so do the traditions. Now if you tell a Rifleman to do heavy drill he’ll think you’re on crack and the regiment is proud of its heritage. But would anyone truly want to split up and readopt the names and traditions of the four forming regiments? No way- we’ve moved way beyond that. Then let’s talk practicalities. The regimental system messes up the career management across the infantry and it’s most acute in officers, but also in… Read more »

I think this is as much about sending a message to Mr Putin as joint operations.
Especially after his threat to sink the next British warship that conducts a perfectly legal Freedom of navigation exercise.

A few hundred British soldiers will terrorise him no doubt. If Putin forces an all out war Britain cannot and will not be able to do anything, Even the US would struggle. The EU would not and could not do anything.

You are entitled to your opinion but my opinion is somewhat different to yours. It is a game of cat and mouse and I would not underestimate the Ukraine forces. Just like the Russian’s hollow sabre rattling over HNS Defender recent sight seeing tour. Or the fact that the RAF Typhoons on patrol in Romania were more than capable of intervening and they could ve rapidly reinforced .

There can be only one. haha

I worry about this kind of NATO deployment because we are sending a signal to Ukraine that if push comes to shove we will back them up when, I suspect, we will absolutely not go to WW3 over Ukraine.

Very true. The last time Putin invaded Ukraine Obama/Biden was in office and did nothing. Putin knows Sleepy Joe won’t lift a finger either if he decides to attack them again.

Traitor Don, would Not have lifted a finger either, and refused to provide Ukraine with some warpons to defend its self!

The USA/UK promised to guarantee Ukraine’s borders/provide security and respect the independence and sovereignty of existing borders if they gave up the Nukes they inherited from the USSR…The Budapest Memorandum…So I think it’s fair to say, we squirmed out of our obligations when the little green men seized Ukrainian territory, and Putin knows that, and has called our bluff….

Hopefully our politicians have been clear as to what the limits are.

NATOs sacrificial battalion if Vladimir kicks off. Must be great knowing your are being NATOs suicide troops

The 93rd(Sutherland Highlanders) formed the original thin red line at the battle of Balaclava during the Crimean war against the Russians. The Ukrainians may see this as a good omen. 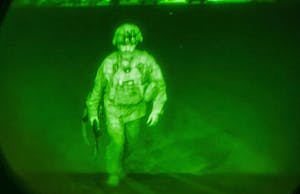 September 6, 2021
This week the panel discuss the fallout of the Afghan situation with guest speaker Kyle Glen followed by a roundup of the news from the last two weeks.

What was the total cost of British war in Afghanistan?