The first visit by a British warship to the world’s largest island nation in nearly seven years has been heralded a success as HMS Albion caps off a busy three day visit.

Following a traditional Indonesian greeting on her arrival in port, accompanied by dancers, musicians and flag waving children, Albion’s visit saw the ship play host to a wide series of talks between diplomats, military officials and industry representatives. While on the flight deck the embarked Royal Marines conducted a crossfit challenge with their Indonesian counterparts.

Away from the ship a team of young sailors and marines, led by Chaplain Eddie Wills, was looking to rekindle the link with the local Nuruz Zahroh Orphanage which had been visited by the Royal Navy in 2011.

Discussing the visit the Chaplain said the Royal Navy “would normally send a working party to help with painting or maintenance. This time, however, we were invited to experience a traditional Indonesian meal.”

“As a Royal Navy Chaplain, my role in HMS Albion is to be a friend and advisor to all onboard, and to support those of all faiths and of none. I was aware that charitable giving is one of the Five Pillars of Islam, so it was somewhat profound to be on the receiving end.”

“Having visited Nuruz Zahroh in 2011 and now again in 2018, the Royal Navy has clearly established a link with this particular orphanage. It’s my sincere hope that this can continue in the future, particularly if deployments to South East Asia become more frequent in the years ahead”.

“The experience made quite an impression on some of our younger sailors and marines” he concluded, saying that many of the contingent had purchased sweets and other gifts from the NAAFI to give away to the children they worked with.

Following the conclusion of the stay ashore HMS Albion headed back to sea for some exercises alongside the Indonesian Navy before heading towards Borneo for the next port of call in Brunei.

I think that you will find that Australia is the largest Island Nation.

Not the biggest island population, that would be Indonesia.

Indonesia has more than 13000 islands and by coastline is the largest group of islands on the planet they are building warships as fast as the local shipyards can work – again, the UK sits by and watches them buy German and Dutch machinery. they love British machinery – (see my post about the old Leander) and it would be an easy sell if someone in HMG could get off their ass and do some selling they are launching 3 x 80m OPV this year with British propulsion systems. -a contract won with totally no support from UKti I could… Read more »

Albion is like “Billy No Mates”
Sailing around the world all by herself.
She is supposed to be the current fleet flagship and yet has no escorting frigate or destroyer.
Says it all really about the current state of our Royal Navy. 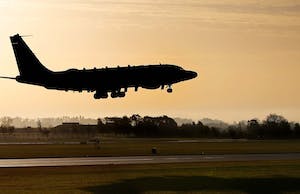 May 17, 2022
An RC-135 Rivet Joint 'signals intelligence' surveillance aircraft is currently monitoring the Russian fleet in the Black Sea.