The British ship is engaged in rescue operations in the Mediterranean and has saved the lives of 377 migrants.

The news comes following an announcement that a British frigate is being deployed against people smugglers in the Mediterranean. HMS Richmond is to be sent to the coast of Libya to stop the human traffickers who are risking lives by taking refugees on the dangerous journey to Europe by sea.

HMS Enterprise previously contributed to a major rescue of 453 migrants in the Mediterranean at the start of the month. The vessel identified four small vessels and safely brought aboard the occupants. The people rescued were later transferred to the German frigate Schleswig Holstein and taken to the southern Italian port of Taranto. HMS Enterprise began operating in the area at the start of July when she replaced HMS Bulwark.

“Once again, our Royal Navy has rescued a large number of migrants from the Mediterranean.

Our focus remains on smashing the criminal smuggling gangs who are putting innocent lives at risk. HMS Enterprise is well equipped for that task, as is the frigate HMS Richmond, which we have also now offered to the mission.”

HMS Enterprise, the tenth ship to bear this name, is a multi-role survey vessel of the Echo class. The vessel is normally tasked with conducting survey work in support of submarine and amphibious operations, however the class is also able to perform a mine countermeasures role. 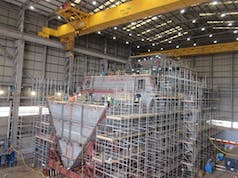 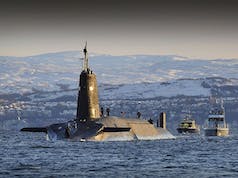 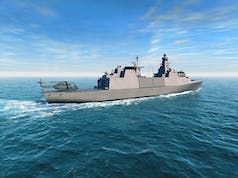 Europe : the final frontier. These are the voyages of the HMS Enterprise. Its five-year mission: to explore strange new worlds, to seek out new life and new civilizations, to boldly go where no migrants has gone before.

Most are legitimate asylum seekers.

So the Royal Navy is now a bus service for moslem invaders.

You spelt Muslim and immigrants wrong

I’d personally hate to be this hate filled.

Henry Sinclair GO AFTER THE PEOPLE SMUGGLERS, DONT ACT LIKE A FERRY SERVICE!

They ARE going after the smugglers, take your nonsense elsewhere

Henry please refer to the article posted on Wednesday by the UK Defence Journal detailing how HMS Richmond is being deployed to combat the people smugglers.

TAKE THEM BACK TO TRIPOLI, DERNA OR BENGHAZI!

Many are legitimate asylum seekers.

MERKEL TAKEN OVER MOD AS WELL???

We’re not the MoD?

Pity they don’t have great white sharks in the med

Would be better served moored in Pompey. This is NOT in the nation’s Interest .

And where do they belong?

And if you even say Syria I’m just gonna be pissed off. 1 mil Brits live in Spain. Should the Spanish send them to ‘where they belong?’

Those 1 million Brits in Spain hardly the same is it ? Plenty room in the gulf states for these people ,surely if they are legitimate refugee they could and would be better placed in Jordan ,Turkey etc less traumatic journey !

What an absurd collection of ignorant stupidity.

Fortunately it’s shared by the masses !

Ian, 2.5 mil in Turkey and Lebanon’s population is 30% Syrian plus Saudi has taken some in. Do a little research before you think you know what you’re on about

You forgot Jordan ? So the richest country on the planet took Some in ? Didn’t they do well round of applause for Saudi

I gave you a reason why you were wrong and you respond like a sarcastic bellend. It’s people like you that aren’t worth bothering even talking to cos you lap up all the far right media outlets and take it for complete fact. Remember, in WW2 the daily mail printed the ‘invasion’ if Jews and they were here to take everyone’s job. People don’t learn do they.

Jordan has also taken in close to a million Syrians as well. Sorry I didn’t mention every Middle eastern country that’s done their part

Imagine that though? 2.5 million in Turkey and do they complain? Do they fuck, 20k come to the UK and suddenly everyone loses their shit. Get a grip, it’s over a 5 year period and they have to go back once it’s safe. I call that a fair deal

Bellend ? You gave me a reason why I was wrong are you actually serious ? Glad you have accurate demographics ? Where do you
Get yours from your stats and figures ?suppose you were on your back thrashing one out when Corbyn got elected haha

I love our Jewish Brothers

Wow. What a lot of hate. To me this story is another reminder of the other half (probably more than half) of the work that our armed forces do. It isn’t all about blowing things up and shooting at people; many deployments are about building Ebola clinics, making food drops in disaster areas, saving people such as this, etc, etc. Well done RN. I’m proud to be a citizen of a country that still has the resources and expertise to do this sort of stuff and, despite some of the comments here, a country where I do believe that for… Read more » 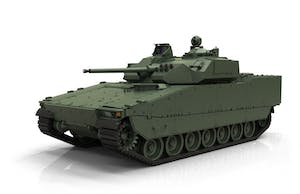 May 24, 2022
The first CV90 Combat Support Vehicles have been delivered to the Norwegian Armed Forces.