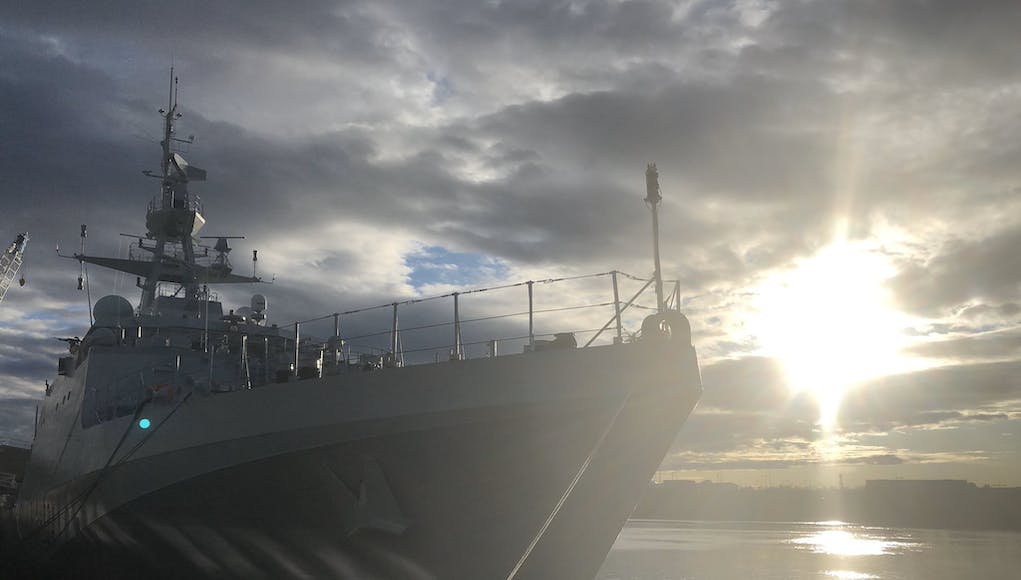 HMS Trent will sail from Glasgow for the first time today with a Royal Navy ships company.

Bored of the #GeneralElection? How about this mighty warship sailing for the first time today. @HMSTrent sails with a @RoyalNavy Ship’s Company from the @BAES_Maritime yard in Scotstoun this afternoon. pic.twitter.com/2tVHVGXi7j

HMS Trent was recently put through sea trials in the Firth of Clyde, down river from Glasgow where she was built.

The Royal Navy say that Trent’s trials allowed her to test her main engineering systems and sensors – engines, water production, sewage and waste collection, electricity generation, radar and the like – and allowed shipwrights to make tweaks and fix any problems once the ship returned to BAE’s yard at Scotstoun.

It is understood that the Ministry of Defence paid an extra £100 million for new Offshore Patrol vessels in order to satisfy a requirement to pay BAE a minimum of £230 million per year. A house of Commons Briefing Paper explains the agreement:

“In 2009 the Government signed a 15 year Terms of Business Agreement (TOBA) with BAE Systems and Babcock. The TOBA guaranteed BAE Systems a minimum level of surface ship build and support activity of £230 million a year. This was judged as the minimum level of work possible to sustain a credible warship-building industry in the UK and thus avoid the delays encountered during the Astute class submarine build caused in part by the loss of skilled staff following the gap between Astute and the Vanguard class submarine build. If cancelled the MoD would be liable for industry closure costs and compensation to BAE Systems.”

The Offshore Patrol Vessel and her sister had been ordered to fill a gap in orders after the second carrier and before the Type 26 frigates started construction.

If we can crew these and keep the Batch 1’s too, they will be an asset in helping the RN prioritise the T23 / T26 to the carrier group and deterrent duties.

I’d like them with a better armament but understand the reasons why folk say it is not necessary for their role.

Useful to do the mundane tasks… low armament to avoid them becoming “replacements” for more capable vessels…. that said, if upgrading these 5 becomes an option ONCE the T31s are delivered and the T26 follow on order is placed, I’d take it then…. they could become “credible” corvettes or light frigates then

Yeah, its limited. I seem to recall an article on Savetheroyalnavy.org about it that proposed a lightweight Towed Array Sonar, which would help, but not sure how effective without sound suppression on the ship itself. And of course as an ASW platform the ship is toothless anyway.

Armament options – 57mm or 40mm up front? That would address the lack of point air defence. HMM as an antiship weapon would work in low intensity environments. They’d still be deathtraps in any peer to peer action

OK, I’ve convinced myself – leave them as they are!

Agree, Daniele, these are good vessels built to a high standard for their type (despite the erstwhile glued rivet issue!). HMS Clyde is on her way back here. Curious to see what we decide for her, now.

May be wrong, but I read somewhere sold to Brazil?

Yeh, that still seems to be the plan. Perhaps only returning to UK for maintenance, etc.
Regards

Probably for a huge overhaul and refit! But Atleast it’ll be BAE and not The Royal Navy covering the costs as she was never owned by the RN. I wonder how much BAE made out of leasing Clyde and all her logistics, maintenance ect to the RN, or indeed how much the RN saved, anyone know? Someone had to come out on top.

they’re talking rubbish its proper warships the nation needs, not fishing bailiffs
the thai navy has shown what a high value warship ca come from these ‘boats
a the thai ship KRABI has been fitted with a 76mm gun, two extra 30mm cannon aft of the bridge wing with e intention of having martlet fitted to then ironically there is still room in the ‘b’turret’ position for another system like say a phalanx

fitted with 76mm oto melara rapid, two 30mm cannon aft of the bridge wing with negotiations ongoing to fit martle to those cannon there is, also room for say a phalanx in the ‘B’ turret position

I Agree Andy, we need a proper corvette

retire the following over the next 25 years as 42 ships will take some time to build.

so for the same volume of ships we can have a C1,C2,C3 mix and standardise.

Visby has a composite hull and costs circa £180m

its not rocket science the mean thing people miss is that they ARE ALREADY BUILT a good maintenance period could see a 76mm cannon fitted two extra 20mm cannon aft of the bridge wing wings. the R.N COULD INCREASE ITS FLEET BY 5 CORVETTES IN UNDER 12 MONTHS MANY NATIONS COUNT CORVETTES IN THEIR FRONT LINE INVENTORY, SO, THE r.n COULD LOOK LIKE THIS 2 CARRIERS, TWO ALBIONS, 13 TYPE 23’S, 6 TYPE 45’S 6 CORVETTES=24 FRONT LINE VESSELS- MUCH BETTER, ESPECIALLY WITH T26 AND 31 TO COME.. ITS WORTH NOTING THAT FOR THE FIRST TIME KEVLAR IS CHEAPER THAN… Read more »

When we had to pay an extra £100 due to the contract I still don’t understand why we did not increase the requirement to include a hanger for added flexibility or a bae 40 mk 4 cannon. At least try to get our value for money out of them

Not sure I would want to land a 20 metre Merlin on a 60 metre flight deck that had had a hangar placed over half of it. Be very tight.

They would need to make the ships longer but I doubt a merlin will even land on one unless its for sea trials. Realistically the hanger will be used for uavs unless the plan to launch them all for containers in the future.

Or just have a telescopic hangar m8.

Well a Seaking based in the falklands did refuel from Hms Clyde a few times but I’m sure it was hovering when doing so. But I’m fine with that as it gives far more range for choppers coming from land or other ships, but I’m sure they would still have to keep enough fuel to get home just incase they couldn’t refuel.

Chinook landed on the old Castle Class a few times too.

DRS
Reply to  The Big Man

How about a retractable/ temporary hanger that is in use when you have a chopper on board. Some small containers for equipment and spares as well.

Same thing occurred to me BB85. If we had to pay an extra 100 million quid, why did we not just order that amount of extra gear? Am I missing something here?

Possibly due to the money being for the Upkeeep of BAe facilities and skills until the dalyed T26 was ready to go … the other equipment would be bought from other manufacturers and the addiitonal money to BAe would still have to have been paid.

“Mighty warship” hahahahahaha and that’s the ship saying that! Only if we turned these into corvettes! We would have a much stronger navy! And it wouldn’t cost that much for some bolt on systems and missiles…

Not sure if it is totally relevant to this article, but having ships to patrol the home waters to control both immigration and illegal fishing etc is in my opinion a pretty good idea. Whilst we perhaps all think the the RN should be sailing around the world, every now and again, it may be for various reasons that our sailors need a bit of a break and a couple of years spent doing time on and off a ship may help them with family issues, retention etc. Whilst I loved my time in the army based in Germany, looking… Read more »

yes but the navy has an invisible 16 archers what they do, where they do it, is a mystery. they should go to the border force.

no idea, no strategy, poor decisions, turn off the lights at the admiralty, lock the doors. i give up, so should they.

a 76mm oto melara gun is generally the norm for corvettes these days th KRABI of the thai navy looks a great mix for a river class ship.

pointless lumps of tin £ 2o million each to check the size of holes in a fishing net!!! i cannot understand what kind of navy the nation wants two new carriers only hide the rest of the disjointed mess

should still be at the builders being turned into a warship £20 million to look at fishermen’s nets? directionless pointless, and that’s just the admiralty.