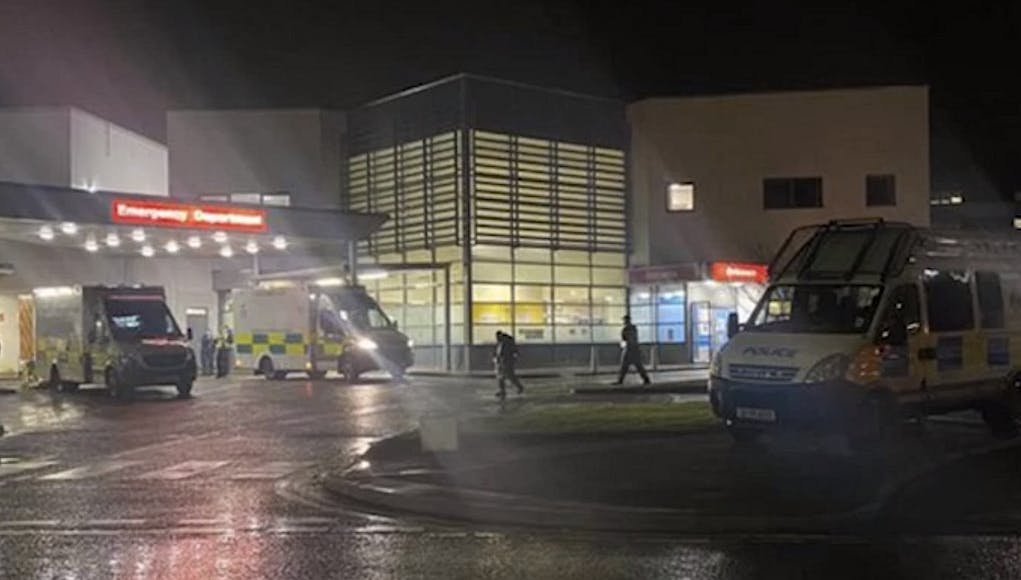 Crosshouse Hospital in Scotland has been locked down by armed police after a nurse was reportedly stabbed.

Police have confirmed a “serious incident” is ongoing.

Officers in Kilmarnock are currently dealing with two serious incidents in the town at this time, one at Crosshouse Hospital and a second in Portland Street. These areas are cordoned off and the public are asked to avoid them at this time. pic.twitter.com/Pcbfg5c9G7

University Hospital Crosshouse, known locally as Crosshouse Hospital, is a 565 bed general hospital at Crosshouse near Kilmarnock, south of Glasgow.

We are assisting Police Scotland with their investigations, and to ensure the safety of staff, patients and visitors. As this is a Police Scotland incident, we are unable to comment any further at this time.”

Police said a woman, 39, was attacked in the car park of University Crosshouse Hospital in Kilmarnock at 19:45 on Thursday. A second woman, 24, was fatally stabbed at about 20:05 on Portland Street, about two miles away. A 40-year-old man then died in a road crash on the C50, on the outskirts of the town, at about 20:30.

Police Scotland said inquiries carried out so far have indicated that the incidents were linked.

Many thoughts and prayers to all the brave front line workers.

what is wrong with this world????

Who the hell would want to hurt a nurse? I hope the courts throw the book at the man/woman who carried out such an attack.

I always knew there were plenty of idiots and wrong uns in this world but if you’re ever in A+E at 4am it’s a huge eye opener. Make no wonder they have security with stab vests there.

Hope everyone is ok

I think this is a very good point. Hospitals can be dangerous places not least in A&E, but can be generally. All sorts end up there. My understanding is its not unusual for police to be regularly around in hospitals. Not sure if this was the case. If not then I think they should be.

Hopefully barred from that hospital for life at least.

It seems a terror attack to me!
Sturgeon in denial again!

Police too busy imposing lockdowns again,
instead of protecting the public from warpon wielding killers going from street to street to kill victims.
The killer should have been shot down, before he reached the next victims, like a Mad dog!

Unfortunately your on the front line as a healthcare worker dealing not just with the Mentally ill but also addiction ; most of which in all honesty due to financial inequality . In Australia one of the preferred types of former ADF personal for Ambulance drivers are not from the medical corp but the SAS !

Not sure i would use the phrase financial inequality. I’d say ‘underclass’. The issue is bad education, poor ambition unwillingness to work and dependency on handouts. Up and till the pandemic jobs have been rising, but jobs were going to immigrants, not least from EU… people with good education, keen ambition, willing to work and an aversion to handouts. And willing to accept the wages. Set against this is our own consumers’ desire to pay for cheap goods, not accepting what the real price is that we need for a more viable society. Employees need to pay more and consumers… Read more »

PS… its a shame we cannot have paragraphs

Apologies, I didn’t make my post clear enough, what I should have stated is that the heavy hitters of the media (BBC/Sky/Guardian) were reporting just that an incident had transpired 12 hours after the event. The DM and Euronews were reporting that 2 people had been stabbed and a car crash.

This case seems a complete failure of security and policing!
The killer was allowed to kill a victim in the hospital grounds and allowed to travel over 2 miles to kill next victim. Unbelievable!
This is a resigning matter for some local police officers!
The killer may have had a history of making threats?

Meirion, where do you live? Let us wait for all the details to come out but you may be surprised at how few police officers would be on duty on an evening shift in somewhere like Kilmarnock. Re. your earlier “The killer should have been shot down, before he reached the next victims, like a Mad dog!” Firearms trained/equipped even less so.