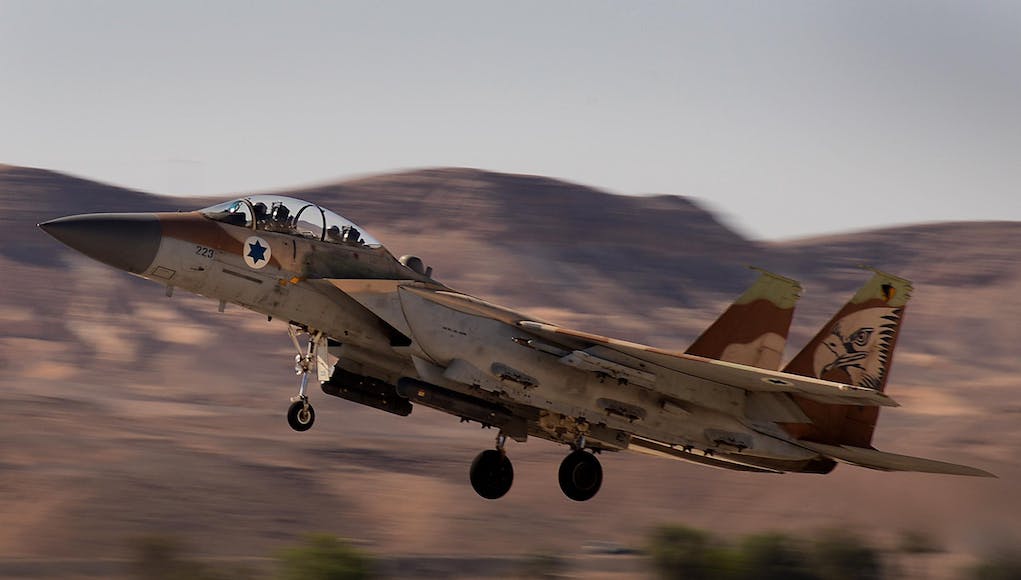 An Israeli F-15 was landed safely after its cockpit canopy flew off at 30,000 feet, the Israeli military have announced.

Local media reported that, in a dramatic cockpit voice recording  of the January the 2nd incident, airmen can be heard shouting to one another over the roaring wind and engine noise.

“During a routine training flight, an F-15 fighter jet had to land after its canopy detached. The plane’s crew was in full control throughout the incident, acted with level-headedness, professionalism and great skill in handling the rare malfunction, and landed the plane safely at the Nevatim Air Base.”

The following transcript has since been released, but the Israeli Defense Forces released the audio of communications between the two-man flight crew themselves so you can listen for yourself:

“Are you all right,” the navigator is heard to ask the pilot, identified as ‘Captain Y’.

“We are without a canopy, proceeding for landing at the nearest base,” the pilot said over the radio, reportedly in a calm voice.

Christ, They were Lucky.
A TU22 has crashed in Russia today The crew were not so lucky.

C.P.W wrote:
A TU22 has crashed in Russia today

And that is what it looks like when a country is falling to pieces.

No that is called losses in training. Have you seen the number of accidents in the US and other NATO countries? Every time you order high tempo exercises you risk crashes. That is inevitable. People often people often use the phrase “A gallon of sweat in training saves a ounce of blood in war” the saying should be “A ounce of blood in training saves gallons of it in war”. Training is and should be dangerous as it is for a dangerous profession. Wrap the men in bubble wrap for safety in training and they will break like dinner plates… Read more »

A routine training flight over Syria?

Nope, Trying to fly below Telegraph pole Wires on Everest Is my bet.

The Aussies manage fine though.
I also believe I would have Blown Off Too at that Speed and Height , Or Worse.

Only glad the crew landed safely!

Happened to FAA in the gulf, harrier FA2 I think it was.

If you think it’s bad losing your canopy, spare a thought…

Talk about coming in on a wing in a prayer, one lucky pilot.

Ah, the F-15. Literally the Toyota Hilux of the skies.

Thoughts to the families of the Russians killed in the recent crash.

Yes, Mine too. No one wishes any Russian people any harm in my Experience, nor do they, us. It’s just a few Elite Power Hungry Twats. The sooner we get rid of said Twats, the better. It’s just my simple opinion.

Im sure the Russian people do not wake up at night feeling guilty of the novichoks attack and its victims.

Only because they have been told that it was not Russia that did it.

Lost canopy…due to sudden increase in cabin pressure = over indulging on hummus the night before perhaps?

dave12 Why would they feel guilty? A man who was admittedly guilty of treason and wanted in Russia was targeted. The UK refused extradition and granted asylum therefore any collateral damage is the fault of the Uk Government. There is no moral difference between using a chemical agent to assassinate a traitor and using a Tornado or Drone to flatten a wedding party to kill a terrorist like Britain, the US and France all do. Unless your going to seriously argue that the chemical agent somehow makes someone more dead than being blown to bits. One just makes people feel… Read more »

Is that the Hi-Lux that featured on Top Gear some years ago. They tried to destroy it, but it just kept going!

The Israeli’s have form with regards damaged F15’s,one managed to return to base after a Mid-Air collision back in the 80’s I think minus the best part of one of its Wings.