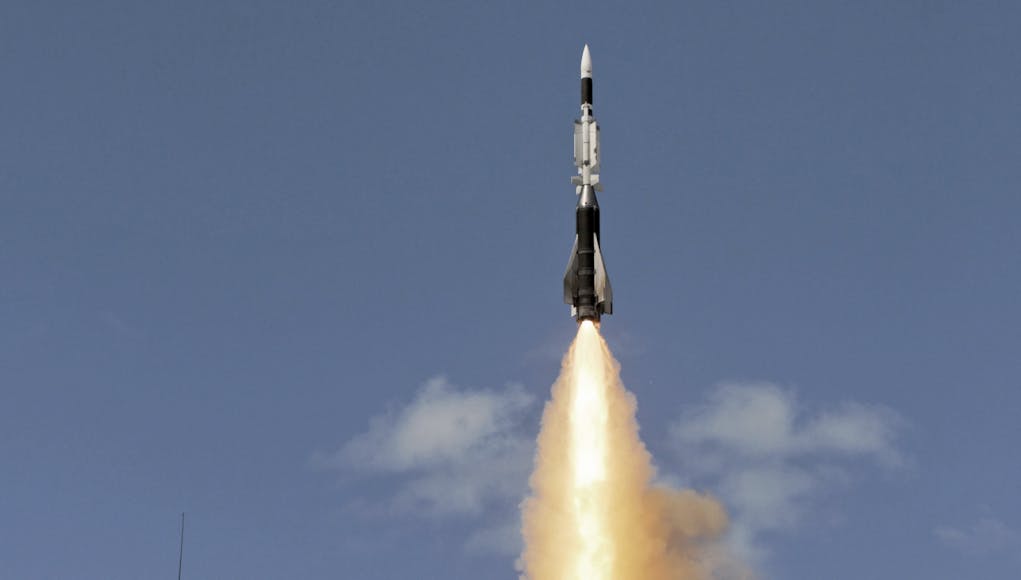 MBDA say in a press release:

“This amendment embodies the participation of Italy in the programme. It follows the notification of the initial contract under French mandate on December 23, 2015, and the Arrangement of Cooperation, signed in June 2016 by the French and Italian Defence Ministers, laying down the framework of responsibilities and rights of the two countries vis-a-vis the missile to be developed in cooperation, and its multiple applications in land and naval defence systems against air attacks and ballistic missiles.

The “B1NT” programme includes the development by MBDA of the new version Block 1 NT (New Technology) of the Aster missile but also the modernisation of SAMP/T systems currently in service with the French Air Force and the Italian Army. These systems will thus acquire enhanced capabilities, particularly against ballistic missiles, constituting an essential contribution for both countries to the NATO programme in this area.”

Italy has in fact expressed its desire to use the Aster 30 Block 1 NT from its future class of offshore patrol vessels.

“The Italian notification strengthens the Aster programme well beyond the financial and technological contribution. Once again, cooperation in Europe adds up to far more than the sum of its parts. After the current Aster 30 Block 1, which gave Europe its first defence capability against theatre ballistic missiles, the Aster 30 Block 1 NT will allow to extend this capability to more complex threats and will also deal with the emerging threat of Anti-Ship Ballistic Missiles (ASBM).”

Earlier in 2016 at the UK-France Security Summit, the two nations pledged to work jointly on complex weapons. According to a joint statement:

“We are fully supporting the long term strategy to jointly deliver effective military equipment in the most efficient manner while minimising national constraints and strengthening our common defence technological and industrial base.

In support of this, Defence Ministers signed in September 2015 an Inter-Governmental Agreement enabling full implementation of Centres of Excellence into MBDA, a key step towards creating inter-dependence between us around key missile technologies.

We also intend to develop in 2016 a portfolio approach to strengthen our industrial links and jointly address the current and future operational requirements of our forces. In that respect, France is for instance considering Brimstone 2 for next standard of Tiger combat helicopter and the United Kingdom is considering the Aster Block 1NT for equipping its T45 Destroyers.”

The French Defence Minister and his Italian counterpart signed the agreement yesterday in Paris.

The programme aims to “extend the range to hit incoming ballistic missiles”.

In retrospect, the UK really should have gone with the Standard family of missiles.

They have progressed very well, while Aster hasn’t gone anywhere in years.

I’m all for anti-ballistic missile capabilities and the Type 45 has shown it’s an excellent platform and is up to the job. However, fitting of Mk41 VLS should be more of a priority giving us land attack and anti-ship abilities that we sorely lack………

Agree with David fit mk41 vl silos first as RN to lose harpoon ant ship missile in 2018 with no planned replacement.
Fitting aster 30 block 1NT can wait as the lack of an anti ship missile fit for type 45s is a huge and glaring new capability gap that needs plugging.

Fitting the MK41 VLS should give us an anti ballistic capability too with the SM 3. I’m not sure how they compare with with the Aster 30 block 1NT though.

Type 45 primary role is air defence, and so ballistic capability needs to the priority, anti-ship/ground attack secondary. Russia/China have ballistic anti-ship missiles and it won’t be long before these flow down to lower nations.

I think its time to do both, but won’t happen.

Ordinarily Steve I would agree with you but given how few hulls we have, the Type 45s need to be more than just AAW destroyers and therefore need to be able to do more to support the fleet. I also agree that both won’t happen and frankly – and I hate to be so pessimistic – but I doubt if either will happen given how cash strapped the RN is…. sickening….

“They have progressed very well, while Aster hasn’t gone anywhere in years.”

They’ve progressed nowhere you idiot. Aster is the better missile.

No it isn’t, are you fucking insane? It is used by many navies around the world to this day, including the RN.

Massively-funded is not “cash strapped” you moron.

“However, fitting of Mk41 VLS should be more of a priority ”

Why the fuck should it? The Sylver is better than that crap.