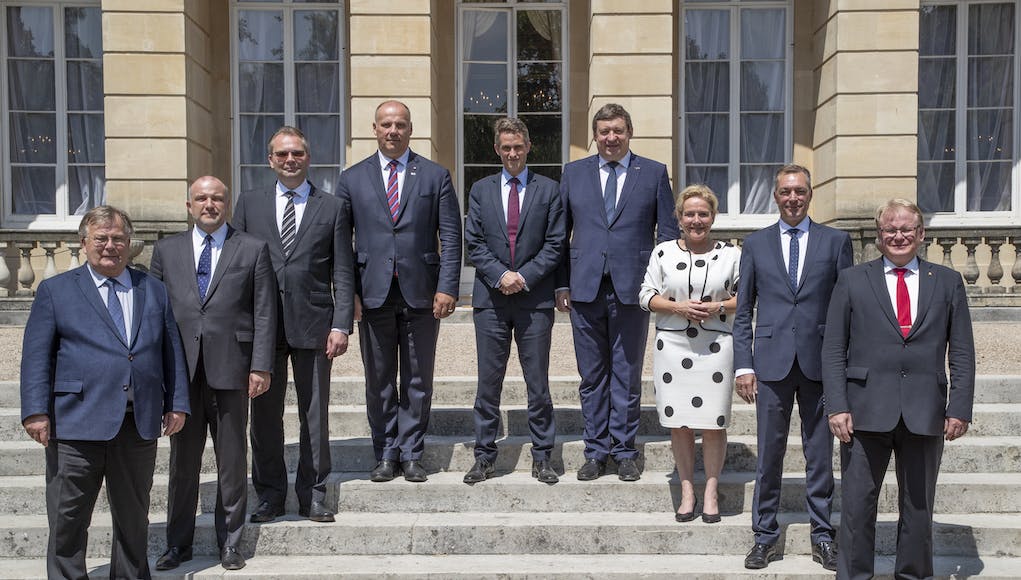 The agreement marks the end of the establishment of the JEF framework and is a key milestone in preparing the force for action. With the MoD saying that the UK at the forefront as the framework nation, the JEF can now deploy over 10,000 personnel from across the nine nations.

“Our commitment today sends a clear message to our allies and adversaries alike – our nations will stand together to meet new and conventional challenges and keep our countries and our citizens safe and secure in an uncertain world.

We are judged by the company we keep, and while the Kremlin seeks to drive a wedge between allies old and new alike, we stand with the international community united in support of international rules.”

Launched in 2015, the joint force has continued to develop so that it’s able to respond rapidly, anywhere in the world, to meet global challenges and threats ranging from humanitarian assistance to conducting high intensity combat operations.

“The JEF, made up of nine northern European allies Denmark, Estonia, Finland, Latvia, Lithuania, The Netherlands, Norway and Sweden, is more than a grouping of military capabilities. It represents the unbreakable partnership between UK and our like-minded northern European allies, born from shared operational experiences and an understanding of the threats and challenges we face today.”

I really like this concept. Shame it can’t all be under the banner of NATO but I guess that’s the point. Surely it’s directed at deterring russian aggression against the northern scandavia and the Baltic’s. Would be good to know a little more about the force structure, exercise pattern and UK framework capabilities, plus what’s roles and capabilities are excluded.

Good. I think the Northern European nations are more reliable, and professional, than the likes of Turkey, Balkans NATO allies, or Spain.

Agree 100%, looks like a collection of honest, reliable, straight shooters (in both senses).

Anthony. It can’t be under NATO because Sweden and Finland aren’t members.

Hi david. I did say I guess that’s the point. That Sweden and Finland can’t risk joining NATO so this overcomes that. It’s a way round the problem. But not ideal in terms of command and control.

It seems to me based on how this has progressed that the UK wants an expeditionary force to justify the carriers but has realised it doesn’t have the depth to achieve this itself and so has joined up with a new smaller nations that will happily join to look more significand but small enough that UK can maintain control over the force. If we had included France or ant of the bigger European countries, they would have wanted power to decide how the force is used etc. Although if the mess hits the fan, and we have to use it… Read more »

I was on vacation in Sweden a few days ago. My tour guide was quite clear – “We decided against having expensive armed forces and swapped them for an answering machine that says ‘we surrender’. There are a few ceremonial troops bjyt not much else”.

Seems a little cynical. We share similar specific concerns with these nations and the force structure seems a good fit

The armed forces of the countries involved are exceptionally professional and we have deep ties with most of them anyway. We have more in common with northern European countries than we probably do with France…

Sorry Steve but this is rubbish. The Russians are threatening Sweden/Finland for thinking about joining NATO and threatening the Baltic’s. A few thousand British infantrymen aren’t going to stop a full or hybrid incursion. The UK can be a force enabler for these countries to defend themselves, providing leadership, strategic assessors and niche capabilities. This approach is welcome.

Would love to see us do something similar for naval units in the gulf and east if suez partnering with Australia NZ and some of these nations, supply escorts for British carriers of British F35B’s on Australian carriers.

Great to see this military relationship with like minded and reliable members.

To me, this is the military replacement of the Northern Future Forum political group with the same members (ex Netherlands) but canceled after Brexit.

It builds on our historic posture of reinforcement Norway and forward deploying against russian northern fleet. Battle of the fyords is a fascinating account of this strategy.

(Chris H) Messrs Barnier, Tusk and Juncker won’t be Happy Bunnies when they see this because it shows the UK has real commitment to European security, can be relied on and is willing to contribute valuable resources to the defence of other nations in the real front line of current East West relations.

Glad this has happened but a part of me feels we should have held off until the EU starts behaving like reasonable people and engaging rather than dictating.

We should not put our international ties at risk just because we are having issues with the EU. Europe is not the EU…