Home Land L85A3: The rifle that refuses to give up 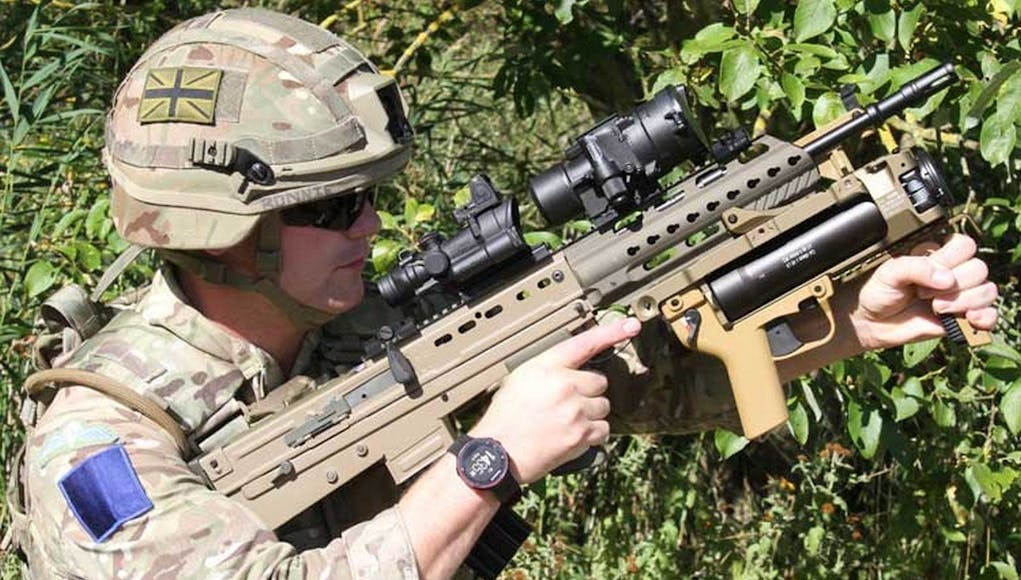 The L85A3 was officially presented in the Defence Vehicle Dynamics exposition near Bedford in the UK in 2016 and shows no sign of going anywhere.

The L85A2 is the latest iteration of the original SA80 which began to serve the British Army in the mid-1980s. However, this bullpup has been modified since then to the L85A2 and now, has gone through its latest round of modifications for its mid-life in the form of the L85A3. The goal of which is to extend the operational lifespan of all rifles to 2025. In addition, there is a lack of general political will to find a replacement for this weapon, so it is more cost effective to look at extending its operational lifespan with new modifications.

This latest modification is part of the ‘future soldier programme’. These new modifications include a new upper receiver, a new accessory rail, which comes with optional add-ons which includes a vertical foregrip, laser pointer, and torch. In addition, the newly modified weapon is compatible with the German HK AG36 40mm under barrelled grenade launcher. However, it is worth noting that this grenade launcher is also being used with current British Army L85A2 weapons platforms.

So in summary, the only changes to the L85A2 design to the L85A3 is as follows:

The British Army and the MoD have decided that there is merit to extending the lifespan of this rifle, but one cannot help but consider whether this is also due to the fact it may be more costly to totally replace the weapons system?

Therefore, it seems to be the case that this latest iteration will keep it operational up to the 2020s and possibly beyond. However, there remains a wider debate as to whether there is another weapons system which will be better placed to service the needs of our military but we’ll leave that for another time.

Good decision for the moment.

We should wait on the US to decide if it is going with the 6.5 or 7mm rounds they are testing and then go with HK or the Tavor once NATO is onboard.

I can tell you what the result of US trials into 6.5 and 7mm rounds right now Pacman27! The 5.56 will be retained as the effort of changing out the entire logistics train for a different round is just not worth the effort. If certain troops need a special round for a particular task then a limited amount of rifles will be purchased in that calibre. As for what replaces the L85, well as others have said I don’t see that happening for a long time now. The British Army has other very expensive equipment programs on the go at… Read more »

IMI/IWI hasn’t shown any interest in either 6.5 or 7, so waiting for the US to pick between either, and then going with the Tavor, which is predominantly 5.56 (with possible military full auto 7.62 varient to be fielded) doesn’t make any sense.

It wouldn’t surprise me if the L85 in whatever form is around for the next 50 years. The longer it’s in service the fewer the bugs that need ironing out. But by then it’ll be more like Triggers broom.

Same thing really. Money can always be found. You just have to be willing to tell people which frivolity goes away example- Kenyan Pop Bands, Food for Dictators, paying an unreasonably high amount to European Union bureaucrats.

Will
Reply to  Elliott

Yawn. Another Brexiter who can’t leave it alone. Now we no longer ‘pay an unreasonably high amount to European Union bureaucrats’, (even though we never did,) how do you think this will help? Have you seen any evidence that HMG will find funds for replacement of a weapons system? No? Thought not. Brexit has further impoverished the UK, just as you were warned. Anyway, they’re now wasting £100bn on a white elephant railway and giving millions to ministers chums for bogus PPE contracts.

The reasons they keep on upgrading it is because:

1.Not a funding priority, the A2 now works to a good enough level, OK, ergonomically its poor, but the troops can adapt to that shortcoming pretty quickly.

2.Much cheaper than buying a new modern rifle.

3.Waiting to see if the Americans finally get a new service rifle and if they change from 5.56mm & which we would probably adopt as well.

Is it really cheaper to upgrade the LA85 when we are the only customer.
The barrels are bound to be shot out of most of the rifles so I can’t see a replacement custom barrel, bolt and rails for the LA85 being cheaper than buying off the shelf from FN AR derivative or even the HK416. The optics and lasers (which are more expensive than the rifles now) can be pulled off the LA85 and attached to the new rifle.

I think NATO will need to move from the 5.56mm round as recent experience has shown it to be under powered against the 7.62mm. Having said that I do wonder if something could be done to do away with the cartridge and move to a CO2 system or some other solution that doesn’t weigh a lot. I know the above is off radar a bit – but bullets weight a lot and if we could do something that: a. gets us back into the long range game b. reduce weight c. thereby giving troops more bullets with which to suppress… Read more »

The issue isn’t power but the reluctance due to The Hague Conventions to go to expanding ammunition. The irony is that is the only provision of those treaties that the signatories didn’t immediately violate in the next war. So the only ways to impart lethal wounds are 1.tumble/cavitation 2. bigger rounds 3. direct hits on vitals and finally 4. velocity and 5. repeated hits. The only countries which have started find ways around/ignore these provisions or design ammunition that doesn’t need to expand are the US, Israel, Russia, and China. The issues with 7.62×51 is weight of both rifle and… Read more »

That should be 762 NATO you automatically go to 20rd mags on average vs 30rd making supply carried and suppression fire more difficult.

Agreed, Elliott. And they weigh more!

I agree with you Elliott. The round fired from the L85A3 has a far better range than the same round used by the US AR rifles. Why? Simply because of barrel length! The AR barrel is only 14,5 inches long while the L85A3 barrel is 20,4 inches, in a rifle of similar overall dimensions. This explains why the Yanks want something with more reach while the Brits already have that. The L85A3 has been producing very impressive reliability records, while it is unrivalled in the accuracy dept! Once users get over the slight discomfort of the weight distribution and ergonomics,… Read more »

Given that the basic gun is one of the oldest types of weapons in existence how much innovation can possibly be left? Surely we’ve pretty much perfected them by now and a gun in 30 years will not have anything radically better than whats available now.

Weight can be reduced significantly by replacing steel parts with polymer where sensible, removing 1913 to M-lok/kmod will shed a few ounces to.

Front mounted lasers are heavy because batteries are attached. There are plans to move batteries to the butt stock and power optics, IR, lasers etc off the rail reducing their weight.

Apart from that I don’t see any other major changes or advancements in the near future.

Caseless rounds are the future. Much higher muzzle velocity and accuracy and the weight and size of the case around each round saves space in the magazine to allow more rounds to be carried.
If in 2030s the British army is going to move to a new assault rifle then lets look at caseless rounds and a uk built and designed gun to deliver a new rifle.

Nope. The Germans dropped the idea. Copper cartridges carry excess heat away, from the weapon, which careless rounds can’t.

Problems with residue and sealing were never really solved with the case-less round!

or even a cheaper solution 🙂 http://www.military-today.com/firearms/cz_806.htm

I have nothing personal to bring to the weapon discussion itself but given recent commercial developments and Trump is now the self declared ‘genius’ I am coming to the conclusion we should quietly do a lot more with the Canadians rather than the Yanks on military procurement on a reciprocal basis of course. Again I am no expert but if the Police and RMs are using the Colt Canada weapon thats good enough for me. OK I will ‘fess up – I think buying foreign is commercial and economic suicide but if we can develop a relationship with Canada that… Read more »

Forget Canada, There procurement is about as good as India. With a lack of bipartisan support they are left with outdated equipment, new equipment delayed or outright cancelled and a navy on its way to becoming only useful in coastal operations. Do hope it changes there cause I like the Canadians. Australia on the other hand actually has long term planning and bipartisan support with a respectable budget allocated. Hell if Canada can sort them selves out Aus, Can and UK would do well cooperating where possible.

Question, Being from Oz the ADF is in process of acquiring the EF88 Steyr’s what is the view on the two rifles compared to one another? Do seem to be some similarities in history coming in around same period and both nations refusing to let them die and turning them into quite capable weapons. Is any one better or do they have trade offs which negate it? Cheers.

Most replies here will be deeply subjective. The Steyer AUG is a distinctive weapon that has a lot of “cool” cred due to it’s distinctive profile and wide availability, while the L85 still struggles with the negative press from the old A1’s. So generally you’ll either get people who’ll denounce the L85 (well the whole SA80 series) as a piece of trash and laud the Steyr, or you’ll get people who are reactionary and defend the L85 to the end. I think you’d find it very hard to find someone who has carried both an L85 and a Aug for… Read more »

Honestly since the entire upper of the weapon is now new aside from a breech block, I am surprised that H&K is not just building a lower receiver to sell these to other potential markets as a simple stamped rifle/ bulpup now……. they have a free overall design they can work…. but the market offers few options in expansion or modernization beyond what has been done already. The modern options on the market are, ar15/m16 variants(yes that includes the 416), kalashnikovs, FN Scar, the tavor and the AUG and really those are in the same place the L85 is……. 40+… Read more »

The whole idea of BULLPUP rifles was they were supposed to be physically SMALLER, More compact and LIGHTER that the long rifles they replaced. The L85 family is HEAVIER and still not as reliable as the L1A1 SLR it replaced. And as seen in Iraq and A/Stan the 5.56 round is totally ineffective.

The 5.56 round is unsuitable for modern warfare, especially with the near global issue of body armour to all the big players. Moving from 7.62 was a POLITICAL decision not a military one. The panic driven clamber for 7.62 guns in Iraq and A/stan proved the inadequacy of the 5.56 round. the SLR should have been swapped for the Scar H in 7.62.