The Royal Navy has maintained its commitment to mine clearance operations in Gulf as the latest rotation of vessels take up station supporting Op Kipion for the next three years.

HMS Blyth, a Sandown class minehunter and HMS Ledbury, a Hunt class mine countermeasures ship, have arrived in the Gulf to relieve HM ships Penzance and Chiddingfold which have been forward deployed to the region since June 2014.

The vessels of the latest rotation are expected to fulfil a similar three-year stint using a six-month rotational crew system to maintain maximum operational availability. They will be based out of Bahrain and will be some of the first units to call HMS Jufair home when it opens later this year. Along with their mine hunting duties, the vessels will engage in a full schedule of visits to regional partners and training exercise with multinational forces in the region.

The Royal Navy’s mine countermeasures task force in the Gulf makes up the 9th Mine Counter Measures Squadron and routinely consists of five vessels; a mothership comprising the battle staff and support elements, two deep water suited Sandown class vessels and two shallow water suited Hunt class vessels. The mothership role is currently being filled by RFA Cardigan Bay, the Bay class vessels having taken on the role formerly filled by the RFA Diligence, with HM ships Bangor, Blyth, Middleton and Ledbury now making up the squadron.

Penzance and Chiddingold will now start the long trip back to their homeports at Faslane and Portsmouth making visits to a number of allied nations along the way for training exercises and port calls. On their return, it is expected they will enter a period of maintenance before re-joining the fleet.

Globally the Royal Navy maintains an active commitment to mine countermeasures operations through the 9th Mine Countermeasures Squadron and the two NATO standing mine countermeasures groups (SNMCMG 1 & 2). Survey ship HMS Enterprise is currently deployed as the flagship of SNMCMG2 in the Mediterranean having just led its group into the Slovenian port of Koper.

The MCM fleet is now showing its age and needs replacing (with T31’s in my opinion).

Take a look at the safe boats Mk 6 – this is the right platform for inshore patrol and is great VFM.

For me the RN should have 50 of them conducting everything from training, hydrographic surveying, to Minehunting and clearance.

The RN is desperately trying to get the balance right and I think is the one armed service that really do give VFM for us taxpayers. 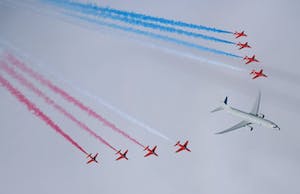