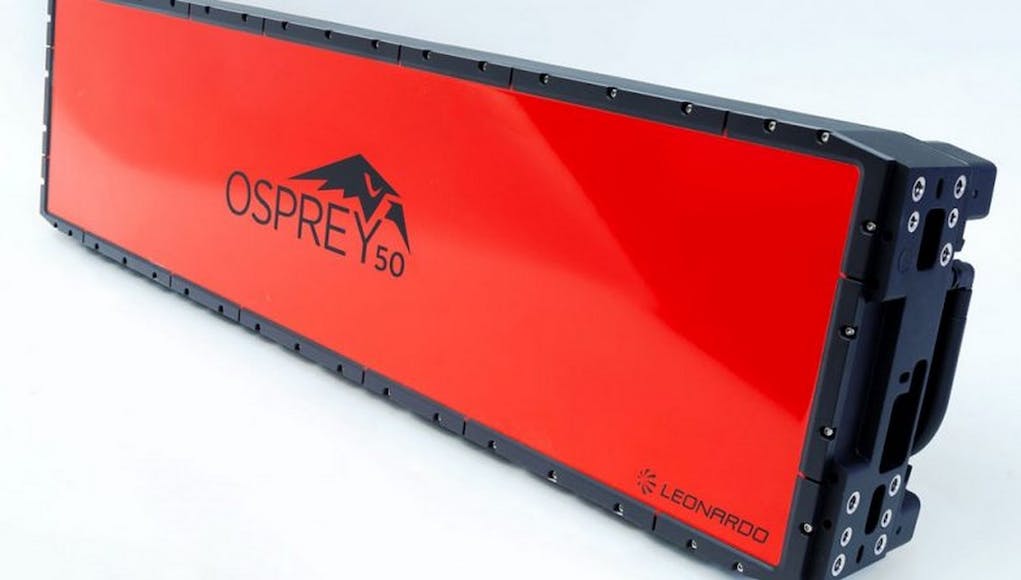 The flight trials were carried out in support of production for a Strategic ISR platform and Collins Aerospace’s Tactical Synthetic Aperture Radar (TacSAR) reconnaissance system.

“Osprey is a multi-mode radar family based on solid-state AESA technology and remains the only system of its type currently available which delivers full spherical coverage with no moving parts.

Among other benefits, this allows the radar to be installed on platforms where a rotating antenna would be unsuitable. The Osprey family has been an international success, having been sold to 12 customers. Osprey 50 is the largest and most capable variant, providing enhanced performance for overland, maritime and air-to-air missions. It is ideally suited to medium and large aircraft which can provide the required space and power.”

The recent trial saw Leonardo flying the Osprey 50 radar on a King Air B200 in the UK, demonstrating the second-generation AESA radar’s wide range of modes.

Leonardo has also re-used technology developed for the Osprey family to refresh its Seaspray family of AESA surveillance radars. Hardware and signal processing techniques developed for Osprey have been introduced back into Seaspray to increase capability and reduce system weight. say the firm.

Always wonder if 2 osprey plates plus extra so/it turret could be fixed to the cabin roof of army and RM wildcats to enhance survivability and targeting if affordable 1/2 plates for rear situational awareness paired with Spike could be a good combination?

Army version doesn’t need the radar and the naval version has the already excellent Seaspray 7000E. What is needed for the latter if there was money to spare is the datalink that was bafflingly omitted from UK examples (unlike South Koreas). This means information from the helicopters can only be passed to the mothership if it lands first and uses a USB stick or via voice over the radio.

This radar has been installed on a Leonardo test bed Merlin for trials. It proved to have a better fidelity than the radar current fitted to our current HM2 Merlins. So who knows, perhaps we’ll see an upgrade in the future?

What Crowsnest should have had.