Defence Secretary Michael Fallon has said that £8 million is being invested in new facilities at the Leuchars base.

Leuchars Station is a British Army installation located in Leuchars, Fife, on the east coast of Scotland, near to the university town of St Andrews.

According to The Courier, he said:

“Defence has to change with the times and it’s fascinating now to see the Army and the RAF together, working together for the defence of Scotland and the defence of the UK. We will go on investing here and this will be one of the major Scottish bases for years to come.”

Formerly RAF Leuchars, it was the second most northerly air defence station in the United Kingdom. The Station ceased to be an RAF Station at 1200 hrs on 31 March 2015 when control of the site was transferred to the Army.

The Army took control of the station and it was then renamed Leuchars Station. The Royal Scots Dragoon Guards gradually relocated from Germany in the spring and summer of 2015 along with 2 Battalion REME and 110 Provost Company. The new station will be at full manning capacity in the Summer of 2016 when the Royal Scots Dragoon Guards return from operational training in Canada.

That’s a bad sign, development often seems to result in closure…..after the money has been sent.

Sorry but the RAF turned off the funding tap as soon as they heard the army was taking over… the camp is in a dire state! Hopefully this will bring the base up to modern standards and make it fit for purpose.

Is this a wise use of public money considering Ms Sturgeons determination on breaking Britain up.

Having trained on the Thetford training area a number of times, I would like to to see us take on Mildenhall and create a joint force base – the facilities there are very good and the US invest in their bases – this is throwing a gift horse away and surely it makes sense to integrate our forces far more than we currently do.

It is funny they closed Leuchars as an RAF station but need to keep the actual airfield open to support the Jets at Lossiemouth as they do not have a proper airfield with arrester gear should the Lossiemouth runways are unavailable for any reason. They have limited RAF staff e.g ATC, Fire etc 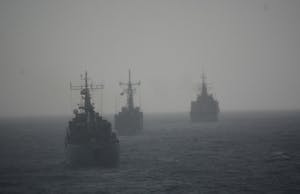