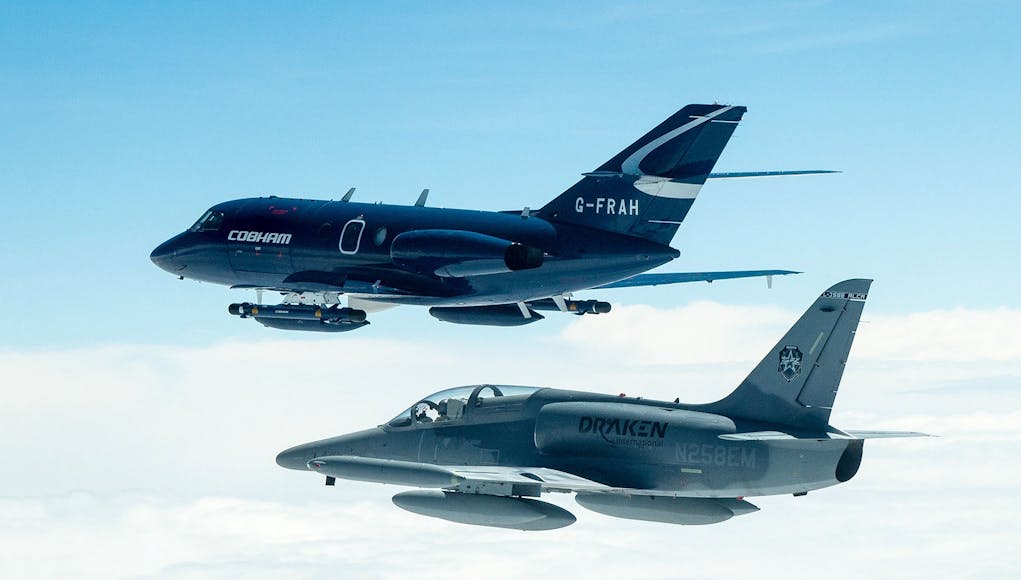 The MoD has scrapped the Air Support to Defence Operational Training (ASDOT) programme.

ASDOT would have seen British pilots trained against jets supplied by industry partners, however the contract has now been halted with no winner selected.

“We received a number of industry proposals in response to the ASDOT invitation to negotiation. We will now re-assess the parameters for the programme.”

One of the selling points of the contract was that it would eliminate maintenance and storage costs of the aircraft used, with the MoD only paying for the time it worked with the aircraft.

Another plus would have been that the aircraft used would likely have been different to those operated by British pilots, providing experience of working with or against aircraft types not in use by British forces.

Last year, Cobham announced that QinetiQ had joined Draken International and 3SDL as a member of the Cobham team to develop solutions for the delivery of operational readiness training under the ASDOT programme. Another notable contender was the Leonardo, Top Aces and Inzpire team, named Red Aces.

The ASDOT programme was designed to meet the training component of UK air support across the Air Force, Navy, Army and Joint Forces Commands from 2020, progressively replacing existing contracted and military service provision as these programmes expire or reach their planned end of service date.

In June 2016 the Ministry of Defence released information on what the UK Military Flight Training Systems Project Team would be seeking from the multi-phased programme.

It’s unknown if the programme will resurface.

Cobham already provide aircraft out of Bournmouth Hurn for this sort of thing.

Prevents 100 Squadron and 736 NAS getting the chop?

A curious development, I wonder if Humphrey at ThinPinstripeLine has any insight on this?

Whatever Humphrey says, it will be in supportive of the government.

For that is his job.

I think he writes the most balanced and informative defence articles currently available on the web.

Well behind Gabriel for level of detail, Humphrey is more opinion than insight.

Agreed, unfortunately the Arm Chair brigade often don’t like what he has to say.

I wonder how much this particular exercise cost?

Jordan was trying to sell 12 upgraded Hawk Mk 63. If the MoD could buy those cheap, they would be ideal for this role.
Looking at the reported financial troubles of Bristow, with the potential risk to UK air sea rescue, makes me wonder whether the rush to privatise military roles was/is a big mistake.

Yes, its a stupid decision to replace military roles with contractors. For starters everything is done to contract, anything extra out of scope costs significantly. There’s no flexibility to do anything but what has been agreed within the contract, unless you want to renegotiate or pay extra. The most important problem is that it reduces your need for skilled manpower. Which means during a crisis there’s even less down time for those still serving. The MOD have got it in their heads that contracting out is a win-win situation, when the opposite is true. The promotion of “contractorisation” is driven… Read more »

I recall our RAF Canberras used to do some of the duties Cobham do now?

Calibration duties and 115 squadron I think?

It was 360 Squadron for jamming radar and 100 Squadron for target towing etc. I believe they had a rather dubious wartime role of visual maritime recce, as I don’t think 360’s radar spoofing capabilities were capable enough for combat over Europe.

Oh how I’d love to see another Canberra!

‘Yes, its a stupid decision to replace military roles with contractors’

They formed the core element of Babcock’s bid, plus King Airs, and offer no increase in capability than a Hawk Tmk1. The fleet had an average of 4,500hrs on them with the Adours averaging iro 2,500hrs.

They were going to use HHA’s Hunters to cover any ‘transition’ period given the advantage (perhaps an unfair one) that they have aircraft on the MAR, ironically with no contracts with MOD for coming on 5 years.

Heres a radical idea, it may sound ridiculous but how about the RAF/FAA/AAC train their own people instead of relying on outsourced companies, that goes with most things defence.
Insane I know! Train your own forces!
Privatisation has gone too far.

I’ve never quite got the cost benefits really. From what I’ve read, the private companies largely employ ex military staff many of whom leave the military in search of better incomes. So the private companies apparently pay very well, have to purchase all the necessary hardware and make a very nice profit for the shareholders and of course hand the MOD a bill for the lot. So how exactly it’s cheaper for the taxpayer I don’t really understand. And when you add in the restrictions of these contracts, there’s even less that seems to be beneficial about it.

Bottom-line is that MoD will hide behind the affordability excuse and say industry couldn’t provide a solution for what they expected. They placed the contract value at £495 million NPV for the 15 total years which equates to about £750 million through the life of the programme at 3% increase per year and this tallies with the contract notice of late 2017. Having seen two of the bids through-life costs, the programme was affordable, and through negotiation they may have got to a contracting position. What’s likely to have happened is one of three things: The spend profile in the… Read more »

Ooh, pray do tell, which 2 bidders was it?

You’ve already mentioned Babcock so who’s the other?