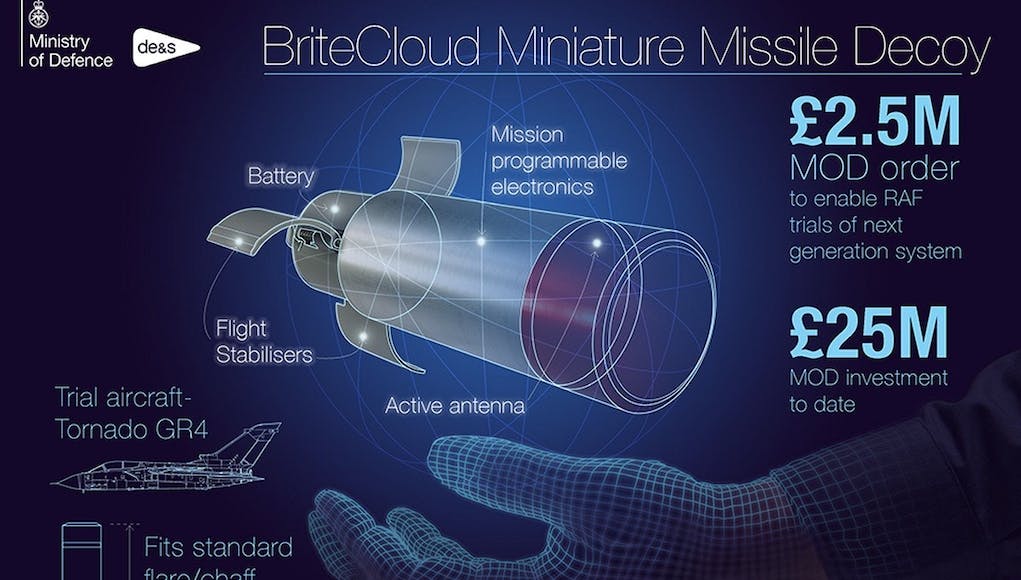 The Ministry of Defence has placed a £2.5 million order for UK-designed and built miniature decoys which will help to protect combat jets from missiles.

The cutting-edge BriteCloud system, designed and manufactured in Bedfordshire and Scotland by Leonardo-Finmeccanica, will undergo flight trials on RAF Tornado aircraft later this year.

BriteCloud, which is similar in size and appearance to a beverage can, can be fired from an aircraft’s flare dispenser without the need for modification to the aircraft. Once deployed, it uses powerful radar emissions to disrupt systems within radar-guided air-to-air and surface-to-air missiles.

A pilot can launch the compact unit, which is packed with advanced electronics, to confuse an attacking missile, drawing it away to a point where it no longer poses a threat.

“The cutting-edge technology behind BriteCloud demonstrates the MOD’s commitment to harnessing and growing the incredible creativity in our Defence supply chain.

Supported by our £178 billion investment in equipment, these new decoy systems show that we are continually pushing the boundaries of innovation, making the most of Great British skills and brains to keep our Armed Forces safe from our adversaries.”

“The development of BriteCloud has only recently been made possible after many years of advances in technology, and shows how UK Defence, in partnership with industry, is leading the charge when it comes to research and development.

Flight trials planned for later this year will test the system’s effectiveness against a wide range of current and potential threats, helping to ensure that UK pilots have the tools they need to successfully complete their missions wherever they are in the world.”

The MoD has been working with Leonardo-Finmeccanica to develop the BriteCloud system since 2012. The project is sustaining around 25 design jobs at the company’s Edinburgh and Luton sites.

To date, the MoD has invested around £25 million in the BriteCloud system through a project commissioned by Defence Science and Technology Laboratory (Dstl) and managed by Defence Equipment and Support (DE&S).

This new £2.5 million batch order will allow the RAF to explore how BriteCloud could best be deployed operationally. If successful, the system could be available for Tornado aircraft operations by mid-2017.

“BriteCloud is much easier to install on a variety of aircraft than previous bulkier decoy systems, because it can be used from existing countermeasure dispensers such as flare launchers.

Although the devices are highly advanced, they are straightforward to use. They can be easily re-programmed during operations to defeat new threats as they are encountered, giving the RAF an important advantage in engagements.”

Fantastic news “well done” What’s pissing me off at the minute is the US’s aid package to Israel consisting of $30 Billion over ten years. Make no mistake wherever the next war is the UK will be by the US’s side, where will Israel be? I get that part of the aid package is to get first dibs on Israeli made tech, hence why this deal went through but why can’t the UK get such a deal with the US being it’s closest ally and tier 1 partner? I’m bemused, esp after years of criticism from US government regarding our… Read more »

There are those who wouldn’t be too keen on the idea of the UK receiving an ‘aid package’ for no apparent reason. We’re a prosperous nation not a charity case.

The friendship should be reflected in trade deals and partnership for joint benefit, sometimes swaying more in each others favour from time to time. IE. We give you our old harriers for almost nothing… you put the European HUB for the F-35 in Italy.

“aid” from the US would be bizarre.

The 4th/5th wealthiest nation on Earth would have no need for it.

that’s a silly way to be looking at things imo.

but i respect it.

You want US taxpayers to pay for the UK’s defence?

Funnily enough, Finland, Estonia, Sweden, Norway, Poland, Bulgaria & Romania would like UK taxpayers to pay for their defence. So how about it kiddo?

Guys, the point being is, we are more likely to join the US in conflict than Israel while they plead vulnerability. They are getting $3 Billion a year for ten years. Can you imagine what such aid package would do for our armed forces? I see no shame in taking aid from the US as our closest military partner. Remember the pounding our government got for the SDR of 2010 and how we continue to be slaughtered for lack of capability now. I don’t know why the media and public are not all over this. Can you imagined if the… Read more »

Plenty of us are unhappy with the way things have gone. I’d imagine most of the people who frequent this website would like an increase in defence spending.

I don’t see a gift package from the US as a solution, though. It would be humiliating beyond repair. Both the problem with the defence spending in this country and the solution to it come from within.

Also… operate ‘him’? It brings some pretty hilarious images into my head, but ‘she’ is coming along nicely.

“SHE” Queen Elizabeth Carrier
“HIM” Prince of Wales Carrier

Anyways call it he/she up to you lol

Methinks you are a troll, maybe from another, more eastern climate.

US financial military aid to Israel on a large scale has been going on for over a decade. In the early 2000s I sold stuff to the Israeli military and security services (as well as many other governments and corporations around Europe & the Middle East). On getting close to closing one major deal I was told by the person I was dealing with in Israel “see if you can get your product approved for foreign military funding because for every $1 of local budget that I have to spend I have $10 of US funds”. I was able to… Read more »

Because of Israel’s political situation in the middle east it’s very unlikely that they’ll see large scale conflict for a long time despite having already one of the greater and technological advanced militaries in the region if not the world.

The aid deal past and present don’t sit with me. I’m passionate about the UK and think all these cuts we made were unnecessary at a time when the US was handing out big money to a country that probably won’t see conflict outside it’s own boarders.

Israel not likely to see war? In what universe?

So how about ordering some warships or fighter/bombers or tanks? I don’t think any have been ordered since Cameron came into power i.e. since 2010.

“BriteCloud, which is similar in size and appearance to a beverage can…”

Really tiny then. I wonder whether, when we get our new Predator Bs with extra hardpoints and heavier payload capacity, it would make sense to incorporate a launcher for these to increase survivability a bit when not in totally friendly airspace. That would assume Pretator B will have the sensors to know whether something has locked on to it – not sure if it will or not.

This is a really interesting capability actually. I saw a video about a year ago but thought it was “pie in the sky” thinking. But there you go !

Making it compatable to standard decoy launchers is just a great move. This should keep us ahead of the curve on missile vs decoy and save a shed load of money in the long run.

Does anyone have a ball park comparison between this decoy and the towed decoy on typhoon, or the “siren” system on RN vessels ?