This will guide NATO’s approach to space, the opportunities and challenges. “We can play an important role as a forum to share information, increase interoperability, and ensure that our missions and operations can call on the support they need,” said NATO Secretary General Jens Stoltenberg.

The Secretary General announced that Allies have already generated around three-quarters of the forces required. “There is still work to do, but by the end of the year, we aim to be at full strength,” he said.

Afghanistan was also high on the agenda, with a meeting of all nations contributing to NATO’s Resolute Support Mission and with participation from the United Nations, European Union, World Bank, and Afghan Defence Minister Asadullah Khalid.

“While many challenges remain in Afghanistan, we now have a unique opportunity for peace,” said the Secretary General. He underlined that Allies fully support U.S. efforts to achieve a political settlement in Afghanistan.

Mr. Stoltenberg also announced that Allies have recently generated forces for the next rotation, and confirmed financial support for the Afghan security forces through 2024. “We will stay in Afghanistan for as long as necessary, to ensure the country never again becomes a safe haven for international terrorists,” he said. 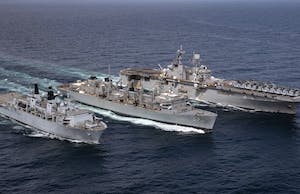 May 11, 2021
British and American assault ships have been exercising together in the North Sea.