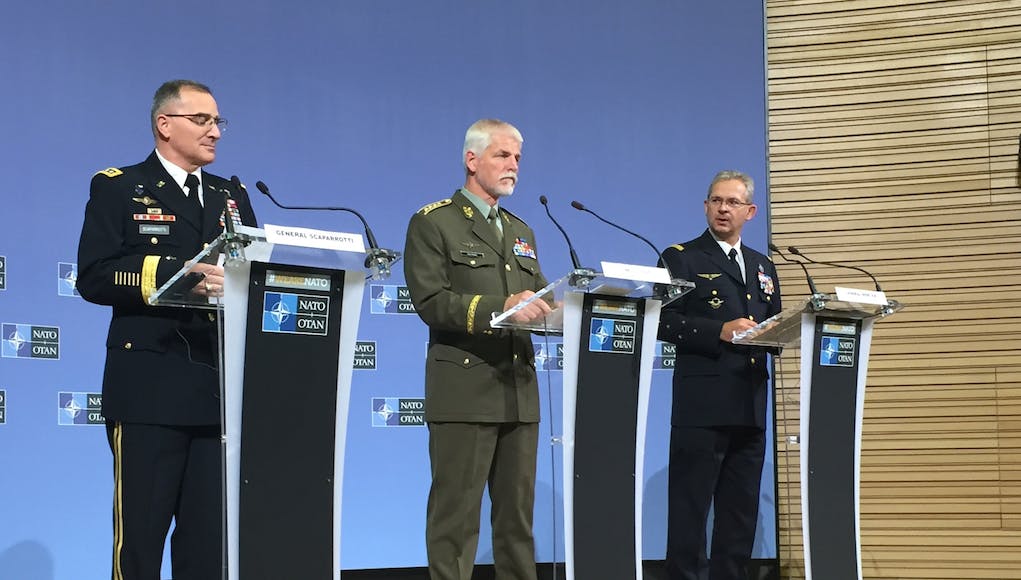 The world situation is highly volatile, and NATO must be adaptable and constantly ready to respond to any threat or challenge, the chairman of the alliance’s Military Committee said today.

Gen. Petr Pavel of the Czech army told reporters that this week’s meeting of NATO’s chiefs of defence addresses the range of challenges from defence and deterrence to threats from the Middle East and North Africa.

“With instability and conflict in the Middle East, North Africa and the Sahel, coupled with terrorism that continues to threaten our societies, the chiefs of defense exchanged views on what more the alliance can provide to our partners – such as, for example, training,” Pavel said.

The chiefs of defense also discussed the NATO training and capacity building effort in Iraq, as well as the need to discuss that effort with the new Iraqi government once it is formed, Pavel said. They also wanted to make sure the NATO effort in Iraq complements efforts in Iraq by other nations and the European Union.

Scaparrotti and Mercier highlighted the exercises that the alliance is planning.

“This is an important element in alliance readiness and adaptation to new security challenges,” Scaparrotti said. “They ensure our troops are ready to respond to challenges from any direction and demonstrates the alliance stands ready to defend all allies and is committed that our alliance is committed to defending our values.”

Mercier said Trident Juncture 2018 is designed to ensure that NATO forces are trained and ready. The exercise will encompass 40,000 service members and be held in and around Norway in November. “It will be an important test and a tremendous display of our collective abilities,” he said. In addition to the live exercise, it will include a tabletop exercise conducted in Naples, Italy.

Scaparrotti said Trident Juncture is part of the deterrence of Russia. “It’s a demonstration of our capability and how we see the world and what we’re able to do,” the general said.

“It’s a deterrent message. If you look at our exercise versus what Russia does, our exercise is focused on defense of the sovereign nations that are a part of NATO. That’s what we do, and that is what this will represent, as well.”

The exercise is a demonstration of alliance unity and outreach, as a number of NATO partners will participate, Mercier said. “It is also a good demonstration of our interoperability,” he added, calling Trident Junction a prime example of NATO allies and partners working together in peacetime as well as crisis.

Mercier also talked about the changes being contemplated to the NATO command structure to make the alliance operate at the speed it needs to in this challenging world.

“I firmly believe this change is only a step to keeping a competitive edge,” he said. “Our alliance has to continue to innovate and adapt to a very challenging environment.”