The NATO-Russia Council, which brings together all 29 NATO Allies and Russia, met in Brussels on Friday.

“On both of these issues, Allies and Russia fundamentally disagree, but that is exactly why it is important to talk – to address concerns, increase predictability and reduce risks,” he said.

“Since 2014, Ukraine has always been the first item on our agenda. We discussed the heightened tensions in and around the Sea of Azov, as well as the security situation in eastern Ukraine. Allies made clear that they do not and will not recognise the illegal annexation of Crimea. And they called on Russia to immediately release the sailors and ships seized in November.

We also addressed the INF Treaty. All members of the NATO-Russia Council agree that the Treaty has been crucial to Euro-Atlantic security. But the Treaty is now in jeopardy.   And unfortunately, we have not seen any signs of a breakthrough. NATO Foreign Ministers met on this issue in December.  And all Allies agreed that Russia’s SSC-8 system violates the INF Treaty. Today, Allies urged Russia again to return to full and verifiable compliance with the Treaty. They also expressed firm commitment to supporting and strengthening real and verifiable arms control.

Today’s meeting covered two of the most serious issues affecting Euro-Atlantic security. Our discussions are not always easy.

But that’s exactly why they are so important. And we remain committed to continuing our dialogue.”

Russia are playing this as “the US left the treaty first” then they have rescinded the treaty agreement because the USA stated they were leaving. Reality is the Russian’s have developed over the last 2 years ever increasing numbers of intermediate range nuclear armed missiles to provide Putin with a first strike “knock out” blow against European alliance members. The key point is that intermediate range missiles like the SSC8 are not necessarily ballistic in trajectory and therefore NATOs early warning system might not be triggered. That is why we should all be worried and why the USA has left… Read more »

Looking at that from the Russia perspective they are seeing at an extremely hawkish west, which over the past couple of decades has intervened in numerous countries, never for the better, overthrown a Russia friendly government in Ukraine, placed troops less than 80 miles from St Petersberg and regularly sends warships into it’s economic waters. Russia will likely have been looking at just how hawkish the US Democrat party was becoming even before Ukraine and the Skripal affair and expecting a Clinton Presidency. Under those perceived circumstances I would likely increase military spending in the same position. It is incidentally… Read more »

A brilliant comment Mr Bell i could not agree more , but Russia trying to keep up in a weapons race it cant afford is good for the west and I hope the Russian people start to see sense over mafia leader putin.

The other and though people don’t realize it greater reason the US left the INF Treaty is China. The PRC was never a signatory so they have been building many cruise missiles for the PLA which range beyond the stipulations US weapons are currently held to for both conventional and nuclear ordnance. Due to this the Pentagon has been looking for a reason to leave the treaty for years and Russia gave them the excuse. As for NATO not being Russia’s enemy? It clearly is by both it’s founding statements, subsequent actions. Such as the agreements with Gorbachev and Yeltsin… Read more »

I don’t care about other countries “reasons” for joining NATO. The NATO countries broke their word, repeatedly in point of fact. So now any security guarantee has all the validity of a Molotov-Ribbentrop 2.0. European Diktats? Have you been to Greece? The Germans and French would do far worse to a country as rich in resources and as culturally different as Russia. The only reason the EU (read Germany and France) are in anyway circumspect in regards to Russia is because of Russia’s vast arsenal of conventional and nuclear ordnance. All under the control of someone who would be willing… Read more »

Sorry but I dont know what your motive is(or i can guess;) but the EU like the west have democratic elections they are not rigged like Russias and they dont use chemical weapons on other nations and then gets caught red handed trying hack the OPCW HQ lol!!!
(to a country as rich in resources and as culturally different as Russia???? LOL Russias GDP in ranked 12thin the world ,gas is the only thing keeping Russias head above the water from a corrupt economy flatlined since 2008 and it cant afford another weapons race with NATO.

My motive? Realism and understanding of the way the world works. I have seen many examples of provocation on BOTH sides. So I have little tolerance for making NATO a saint. When in reality it is a organization without any purpose than to antagonize Russia. The one overarching moral imperative of it’s founding, the containment and defense against Soviet Communism no longer exists. Therefore it is just a scheme to dig in America’s pocket and trap it in another European war. A war America would see no benefit in while the EU would benefit from America’s sacrifice. Democratic elections? Laughable.… Read more »

Agree with all of that, and some.

California passing superficial green regulations? Nothing new.
More countries agree with the Paris Accord? Tell that to Brazil.

Elliottsky for the motherland lol!!! 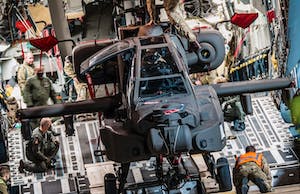 January 23, 2022
50 Apache AH-64E attack helicopters have been purchased from the United States with 14 of them having been delivered to the British Army so far.