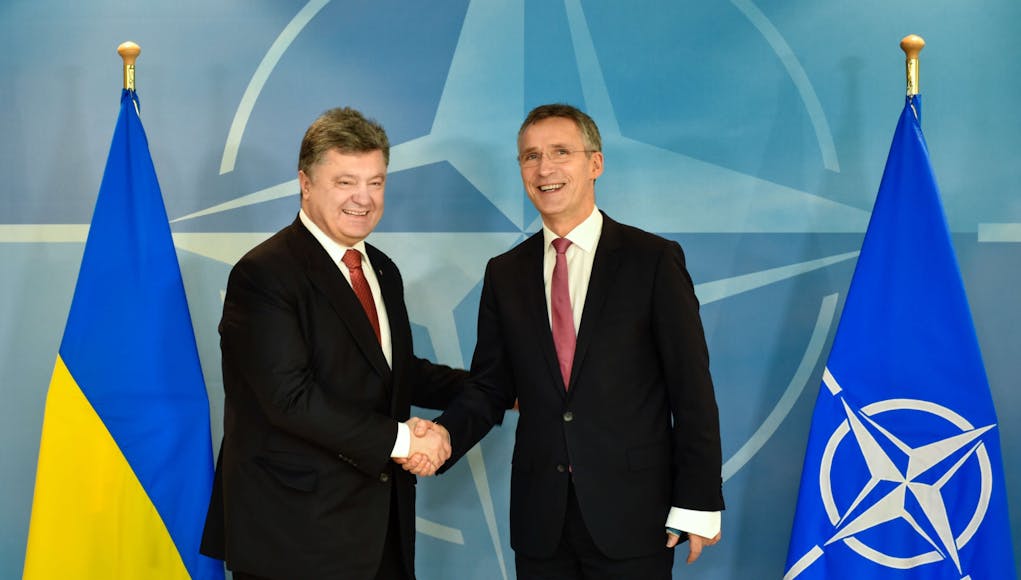 Share
Facebook
Twitter
Pinterest
WhatsApp
Email
NATO Secretary General Jens Stoltenberg was on a two-day visit to Ukraine during which he reaffirmed the Alliance’s strong political and practical support for Ukraine.
Mr. Stoltenberg was in Kyiv together with the Ambassadors of NATO’s North Atlantic Council to mark the twentieth anniversary since the signing of the Distinctive Partnership between NATO and the Ukraine.

Chairing a meeting of the NATO-Ukraine Commission, hosted by Ukrainian President Petro Poroshenko, the Secretary General thanked Ukraine for its many contributions to NATO missions over the past two decades, including in Afghanistan and Iraq.  Mr. Stoltenberg said that since 2014 NATO has significantly increased its support for Ukraine, including with a Comprehensive Assistance Package.

At a joint press conference with President Poroshenko Mr. Stoltenberg told reporters that it was clear that the ceasefire in eastern Ukraine was not holding and he expressed concerns about mounting threats against OSCE monitors. The Secretary General reiterated that the Minsk agreements remain the only path to peace and called on Russian to pull out its thousands of troops from eastern Ukraine.

Addressing parliamentarians in the Ukrainian Rada, the Secretary General emphasised that Ukraine is a sovereign nation and has the right to choose its own security arrangements.  Any decision on future membership in the Alliance would be up to the 29 NATO members. He said he welcomed that Ukraine was moving towards NATO standards.

During his visit to Kyiv, the Secretary General had bilateral meetings with Ukraine’s President Petro Poroshenko, Prime Minister Volodymyr Groysman and other senior officials. Mr. Stoltenberg also took part in the inauguration of the new premises of the NATO Representation to Ukraine, along with the Vice Prime Minister for European and Euro-Atlantic Integration, Ivanna Klympush-Tsintsadze.

NATO discusses situation in the eastern Mediterranean with President Erdogan

Mr Bell
You can flag a comment by clicking its flag icon. Website admin will know that you reported it. Admins may or may not choose to remove the comment or block the author. And please don't worry, your report will be anonymous.

Ukraine situation is a total mess. The time to act was 3 years ago, as soon as the green men turned up to take over the crimea and eastern Ukraine.
Now all we can do is equip the Ukrainians to defend themselves and train their military personnel.
The Ukrainians are fighting NATOs proxy war against the Russians. Only when the war with Russia is finished can we possibly let Ukraine join NATO otherwise there will be a war with Russia involving NATO

joe
Reply to  Mr Bell
You can flag a comment by clicking its flag icon. Website admin will know that you reported it. Admins may or may not choose to remove the comment or block the author. And please don't worry, your report will be anonymous.

The West isn’t supplying Ukraine with anything useful.

The Ukrainian air force was grounded years ago because of Russian SAMs brought across the border and the UKR-AF’s lack of any weapons to counter that.

It’s too late now, but something as simple as an anti-radiation seeker fitted to whatever missile Ukraine had themselves could well have turned the tide.

That time has well passed by now though.

NATO stresses strong support for Ukraine in face of ‘Russian occupation’ | The Baltic Post
You can flag a comment by clicking its flag icon. Website admin will know that you reported it. Admins may or may not choose to remove the comment or block the author. And please don't worry, your report will be anonymous.